I'm returning to a well-trod subject this week and it is the issue of barriers on cycling (and indeed) walking routes. I'm prompted yet again by a minor Twitter-spat over a set of barriers placed on a Greenway.

A contractor involved with the project tweeted the photo to the left, presumably showcasing their work and was immediately tried and judged  by the Twitterati and at least one on-line cycling magazine.

Yes, I had a little pop myself when I tweeted "this sort of stuff fails any basic consideration under the Equality Act", although to be fair I did muse "is it down to [the firm] or the person/ organisation who ordered this access nightmare". I've not named the company involved, they have had enough of a public kicking in my view. I did email the contractor for a comment, but so far, I've not had a reply.

Actually, I've worked out a bit more than I have just let on! I am not a journalist, but I have done some research and I know that the location in the photo is Lisnahull Road in Dungannon. For my eye, the only thing to have been changed is the dropped kerb and tactile paving (which is not as wide as the path and the kerbs not flush); the green surfacing has been redone and the controversial barriers look like that they have simply had a lick of paint and they are not new at all (one can see the repairs in the path surface to barriers which have long been removed in the 2009 image and the current one). Oh dear, a savaging of the company which isn't justified when the barriers predate their involvement it would seem.

So what motivates people to put these works of steel art in our way? There are two main reasons. First, it is about preventing unauthorised access by motorcycles (sometimes quad bikes) and cars. From a legal point of view, it is possible to restrict the use of highways to prevent motors, but it is often the case that Greenways such as the example above never end up with proper highway status which make such possible; they are routes through parks or across land not managed by the highway authority, although park bylaws can apply (it's just they are pretty difficult to enforce).

The routes really need to be "adopted" by the local highway authority as proper highways. It would then (in theory) allow the highway authority to place a traffic regulation order on the route and sign it correctly meaning a motorised vehicle user could then be prosecuted by the police or by fixed penalty by the highway authority if moving traffic contravention powers have been taken on. In essence, no barriers or bollards needed. Other than highway laws, there are other laws and regulations which can be enforced, but it all takes resources. If there were a big problem with anti-social behaviour on the roads (more generally), I like to think the police might act, so why are "roads" for people walking and cycling treated differently? Of course, the police soon turn up when someone is seen walking or cycling on a motorway!


Sadly, there is never enough enforcement and so the metalwork gets deployed. We can use bollards with a minimum clear space of 1.5 metres between them (1.8 metre centres stops car access) and set back about 4 metres from any turn so people using all types of cycle configurations can use them.

There are forgiving bollards on the market which are not immovable should someone cycling crash into them, but are sturdy enough to keep cars out (although I am still searching for the forgiving and fire-brigade lockable UK bollard!). What bollards won't do is stop motorcycles and quad bikes and that's why we end up with the obstructions which led to this post.

The second reason often cited is for slowing cycles or to stop kids running out into the road, which seems to be an obsession of some authorities and designers. The image above shows a cycle track which runs at carriageway level between two streets. The carriageway of the streets at each end have nominal priority and so there are give way road markings at each end of the track. This simple and uncluttered approach suggests to people cycling (who can see where they are going to be in a few seconds' time) that they probably might want to slow down and prepare to stop if necessary; if the road at each end is clear (and there is visibility), then just carry on.


For pedestrians walking towards us in the photo above, they reach a corner formed by the footway running left and right. Most people walking can see this ahead and for people with visual impairment, they have cues from the kerb edge and tactile paving when they need to cross the track. No guardrail, no fuss and accessible to all. There is no need to slow people cycling down and kids are not leaping into the roads.

I have yet to read any research on the subject, but we often do this type of thing because we are worried about people overshooting into a road. If you think about it, this is probably just silly as we simply don't put barriers across the end of every footway in every street where it meets another footway in another street. Even a compromise can still be kept accessible enough.

I have covered this in another post I wrote about the same subject, but it is worth repeating some of it. The photo with my black bike shows a short shared-use cycle track (managed by the local authority) meeting another shared-use cycle track running along a 50mph dual carriageway. Again, users can see what is happening in front of them, but the trunk road managers (not the local authority) required something to slow people cycling as they approached the main road. We had to do it get permission to connect and so there are sometimes compromises. For people cycling, they can ride into the road at the other end (it's a cul-de-sac) and there are no barriers. The barriers are short and well apart and I have easily ridden them with my trailer, so it works. We have now attached directional signs to them, so at least there is a bit more use for them! 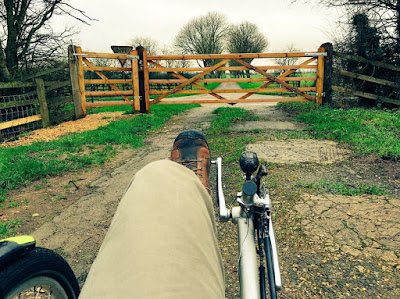 You don't have to be on Twitter too long to see the impact off barriers on people trying to travel. The photo of the gate blocking the bridleway by Kevin Hickman is a perfect example. OK, jump off your cycle, open the gate and ride through you might say. Except many people can't. Cycles are a mobility aid to many people who cycle for miles without a problem, but cannot walk very far or at all. This makes "cyclists dismount" less of an inconvenience and more like direct discrimination.

When he took this photo, Kevin was using his 3-wheel recumbent. Apart from being more difficult to climb out of than an upright cycle, Kevin uses crutches and so it is a double issue to deal with a gate. Kevin describes the approach to such a gate as this;

Sprung steel levers there, need to get up and out of trike, 'spring' gate open, get in back in, reverse while trying to pull gate, then ride through, assuming gate not on spring that automatically swings it shut.

If one cannot reach the gate latch or the gate is heavy (or heavily sprung), then it's game over. If the gate were replaced with properly spaced removable bollards, then vehicle access is managed and access is maintained for all walking, cycling and also wheelchair and mobility scooter users.

I've often said that sooner or later a set of barriers or the policy of a local authority will be tested in the courts using the Equality Act 2010 because their use, in many cases, constitutes the direct discrimination towards disabled users. Organisations, including local authorities (and by implication highway authorities, parks departments and so on) have a duty to make reasonable adjustments so disabled people can access goods and services. Presumably this must extend to the ability to use the public highway. The other really useful thing to remember is that if we make something accessible to all, we pretty much always make things better for everyone else.

So, I have two messages. First, to users. It is really easy to tweet a photo of some crappy barrier layout and laugh/ moan/ weep at the scale of the ineptitude (I have my hand up as guilty). Perhaps every so often, you could send the photo to the local authority or organisation who operates the piece of infrastructure and explain that the layout is not accessible to all, that they are very likely to be in breach of the Equality Act 2010 and point out they have a duty to ensure that disabled people should be able to use the piece of infrastructure as right and they should be making reasonable adjustments. It doesn't actually matter if you consider yourself to have a disability and the infrastructure owner can't make the assumption. Keep it short, respectful and to the point.

I have a couple of final points to chew on. I attended an excellent talk some time ago about inclusive cycling and in combination with my professional (non work) activities around walking, I have a vague idea to write some guidance on the subject. I have some studying I need to finish first and so this is not something I'll get onto soon. If you think it would be helpful, let me know; I will be trawling round my professional networks for a little help at some point! Second (and linked to the first), I had an idea that access issues were getting quite mainstream, but I still think there is a way to go in the highways sector and again, I have the vague idea of putting together some training; so in both cases, watch this space and always feel free to tweet issues and ideas or use the questions page of this blog.
Posted by The Ranty Highwayman at Wednesday, January 13, 2016