OK, hands up, I'll admit it. I can't help myself but pick arguments with people who I know full well are as likely to shift their thinking as I am.

I've had a few days off and in between slobbing out in front of the TV watching Bond films and doing some highways maintenance coursework, I have inevitably been on Twitter arguing. I won't dignify those I have been arguing with naming them, but as a sweeping generalisation I will suggest that they have a deep-seated hatred of active travel, the concept of liveable cities, cyclists in particular, speed limits they disagree with and having the opinion that man-made climate change is hokum. All with undercurrents of misogyny and nationalism.

The "discussion" was in response to these individuals and people tweeting for groups having a go at a variety of road safety organisations (lobby groups and campaigning groups) by suggesting that their key figureheads didn't have a CV which qualified them to be there and that they should be sacked (there must have been a huge lump of jealousy too as these people also had received gongs in the New Year Honours). In response, I challenged one individual over their CV and self-appointed status as a road safety expert, but they were unable to provide anything meaningful in reply other than suggest I read their various websites to find out (I have, and I didn't). I gave a hint at my CV and all of a sudden, it was "don't play the man, play the ball".

This term essentially is about targeting an opposition player, often with the intention of putting them out of action (either physically hurting them or marking them to a point where they cannot function), instead of following the movement of the ball and playing the game for its own sake. Well, I am not a football fan and extreme views need to be challenged. The spat went the usual way of abuse and my usual mode of transport was therefore trotted out as an insult;

"You bought a bike, Lycra ,a little hat. That's it isn't it? Yet you question real experience. Weird." 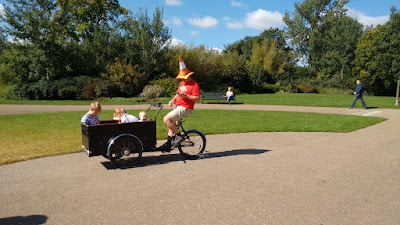 Don't play the man, play the ball indeed! It was funny, because until that point, my argument was that campaigners do not need any qualifications or experience (a good argument helps of course) and that was fine, but to call oneself an expert requires qualification, experience and life-long learning. So therefore anyone who wants their community to change must by definition be so unqualified as to have no weight in their arguments.

As I have often suggested in this blog, there is something to be learnt from any experience - and I mean learning from experience, rather than using using it to self-validate opinions. I'll give an example - the little cycle track I was recently involved with building had gullies in the track itself. In hindsight and after reviewing the scheme, we found a kerb-inlet gully which has a 45 degree face (to match the forgiving kerbs) and this would be a better way do it in the future. In other words, applying some learning from the experience.

So my learning from this argument (which was one step away from full-blown History Today) was that taking an ideological position is far easier than taking an expert position. The former does not need evidence or rigour through learning; it can exist as sound-bites, insults, the demeaning and dismissal of others who hold other views; and frankly, it is a manifestation of good old fashioned bullying where the strong can shout down the weak. Looking into this in more detail, it is worth looking at the word "ideology";

It is defined as;

A set of doctrines or beliefs that are shared by the members of a social group or that form the basis of a political, economic, or other system.

Putting it bluntly, this is to have belief in something which doesn't need to be proven, or perhaps continued belief in the face of overwhelming evidence to the contrary. In terms of those against enabling active travel and liveable cities, this essentially means that prioritising the private car must take precedence over other forms of transport; those without a car are not economically important (or important at all); cars generate growth for the economy and anything designed to restrict private car use is an unwelcome interference from the state; as far as transport goes, traditional libertarian thinking in my book.

Of course, ideology is rampant in transport policy and design thinking whether it is the Department for Transport's traffic forecasts being shown up as historically nonsense, despite policies and funding being geared up to try and grow traffic. It also holds at a very local level where the views of a senior person in a local authority (officer or councillor) go unchallenged and lead to stagnation (often for years) in transport thinking. You need to read this excellent post by David Arditti to see what I mean.

There was then the short Twitter debate the other day about cycling being dangerous, so I tweeted (without comment) a photo of a new London Cycle Superhighway. The riposte was that cycles were no good to do shopping or to move the kids about, so I and others tweeted photos of trailers and cargobikes with shopping and kids. The riposte to that was asking if we had insurance for those "contraptions" - yes, the person holds an ideological view and even in the face of evidence (and not clever data, or long and difficult reads, just photos), they reverted to a collective idea that these cycles needed to be insured.

This brings me onto an interesting thought experiment; The 5 Monkeys.

An experimenter puts 5 monkeys in a large cage. High up at the top of the cage, well beyond the reach of the monkeys, is a bunch of bananas. Underneath the bananas is a ladder.

The monkeys immediately spot the bananas and one begins to climb the ladder. As he does, however, the experimenter sprays him with a stream of cold water. Then, he proceeds to spray each of the other monkeys.

Now one monkey is removed and a new monkey is introduced to the cage. Spotting the bananas, he naively begins to climb the ladder. The other monkeys pull him off and beat him.

Here’s where it gets interesting. The experimenter removes a second one of the original monkeys from the cage and replaces him with a new monkey. Again, the new monkey begins to climb the ladder and, again, the other monkeys pull him off and beat him – including the monkey who had never been sprayed.

I have no idea if this was ever an actual experiment, but it is a great piece of thinking and shows both how collective knowledge and individual experience can shape ideologies without anyone having any evidence or rational arguments (and if you are as childish as me, you'll also be chuckling at the Finbarr Saunders-esque language - you were thinking it weren't you).

The real-life application of The 5 Monkeys is the statement that "we've always done it this way". It's something that I am sure many people have come across in the workplace and dare I say it within campaigning. It's about "conventional wisdom" which people simply adhere to without questioning and my advice is to never take anything for granted. You'll often hear comments such as "common sense" or "stands to reason" as the sole evidence presented to support an opinion; you know the type of person.

We can often see The 5 Monkeys at work. Whether it is shopkeepers over-estimating the number of people arriving at their shops by car and thinking they spend most (they, don't, it is people walking) or building more lanes solves congestion (it doesn't); the myths prevail. The stock rebuttal to a discussion on cycling (where one party is hostile to it) normally descends into bullshit bingo (thanks James Avery); and cycling seems to be the transport whipping boy, especially where real changes are being made.

It might be because most people don't have the time or inclination to check what people are saying (and that goes for any side of any argument), but a large part must be down to lazy thinking and simply accepting ideology as fact, despite expert evidence to the contrary. As far as making our urban places liveable, there are people out there who are genuinely terrified of change and they are on the defensive and we should at least be sympathetic. Whether it is a black cab driver in London worried about their livelihood because of the threat from Uber, or someone with a failing shop worried about car parking being lost, it is easy to blame others.

This takes me full circle to the original argument which prompted this post. I was arguing with people who have ideological views and they actively seek "evidence" to support their position. Anyone who disagrees with them will be dismissed (often in an insulting way) and the arguments simply don't stack up to any reasonable scrutiny. They may simply be the collective product of The 5 Monkeys because they know they are entitled to their views, but cannot remember why, or they are people who know very well how the land lies and are the researchers conducting the experiment on The 5 Monkeys.

Perhaps my conclusion has to be that ideology needs to be challenged, but with facts and not other ideologies. It follows that social media might be good at spreading ideas, but it is less good at spreading detail. But in the final analysis, we are basically dealing with bullies and while we're not in the playground now, it is time the bullies picked on someone their own size. That's where expert thinking comes in, sue me if I am wrong.
Posted by The Ranty Highwayman at Sunday, January 03, 2016