Close The Road, Open The Street

So, yesterday, we decamped to Clacton-on-Sea in Essex for the annual Clacton Air Show and although the main interest was blasting around the sky, there was the usual opportunity for some geeky transport observation.

It wasn't until the show was over and we headed away from the beach that I noticed that a large chunk of Marine Parade was closed to traffic. Clacton's sea front is at, well, sea level and fronted by cliffs. The airshow had stalls and activities associated with it and these were accommodated on the green at the top of the cliffs and with the vehicles servicing the set up and the thousands of people in town for the day, Marine Parade was closed to traffic.

Marine Parade provides an east-west link through the town and in common with seaside towns, the road is wide, difficult to cross and casualties are common (especially with pedestrians being hurt). It is no small wonder that with motor traffic excluded, people started to walk along the road and for those cycling, there were no traffic worries as the photos below show (the vehicles are parked and associated with the event); 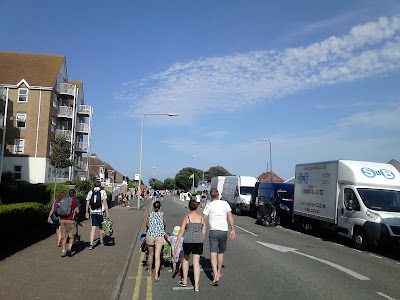 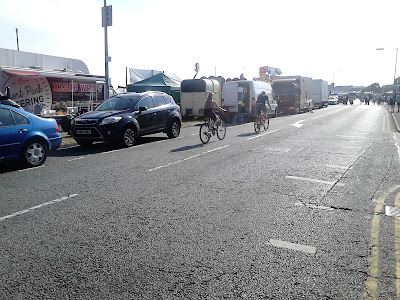 Marine Parade has lots of side roads running perpendicularly away from it and they were also closed at the sea front in a very robust, but cheap way; using Legato concrete blocks. These are much better than a handful of cones which can be moved about. 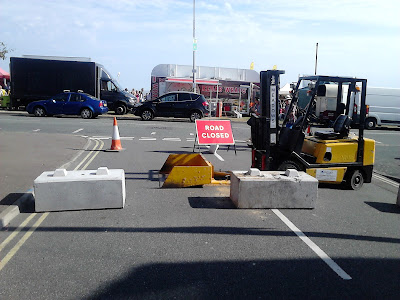 Closing roads to traffic is pretty common for events and festivals; indeed, we often have large roads closed for such events which also attract a great deal of people travelling by car (and the Clacton Airshow attracted a lot of vehicles). OK, there was some traffic congestion when the show finished, but in fairness, it's no different to a stadium kicking out or a retail park on a Sunday afternoon.

We normally agonise over traffic models, we deal with objections about perceived loss of trade or an increase in congestion. But it is so often the case that the system rebalances and we have set aside space for other uses as a result. Perhaps we should undertake "before" and "after" studies on events to generate more data to show how things can cope and indeed how closing roads can open our streets. 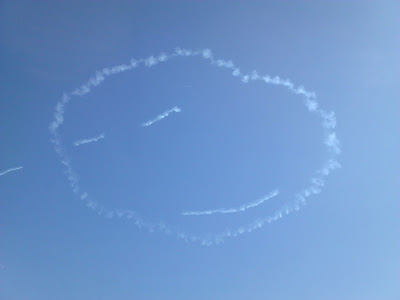 Posted by The Ranty Highwayman at Saturday, August 27, 2016