A Walk In Walton

In this week's blog, I look at a little high street which has made extensive use of continuous footways and it serves to remind us that new ideas are rarely new.

Walton-on-the-Naze is in the far north-east corner of Essex and as is characterised by this part of the country, the town (with nearby Frinton-on-Sea) is almost on a peninsula because of the network of watercourses and marshes around it. It's very much at the end of the line as far as rail and road go and so it's perhaps not as popular (in tourist destination terms) as Clacton-on-Sea and Southend-on-Sea. But, it's a pretty little town, with a great beach for kids and being compact, it is eminently walkable.

Anyway, the point of this blog post is to talk about the High Street in Walton. I have visited the town with my family on and off for some years (not for a few years though), but it was only this last weekend did I notice that the footways along the High Street are all continuous. I put it down to having sharpened my eye in the last few years, but it wasn't until we had walked along most of the street that I noticed!

Continuous footways are those which simply continue across side roads (as with private accesses) so that people driving are having to cross them to get to and from the side roads. In essence, pedestrians retain full priority. I explored the concept some time back here and here. The layout in essence turns usual custom and practice on it's head. The image below shows different junction  treatments. The first drawing shows a layout we see all over the UK; the second is better as there is now tactile paving to assist visually impaired people to cross the side road; third is a large flat road hump (a speed table) to provide a level crossing of the side road which is better for those with reduced mobility and fourth is a continuous footway.

The Walton layout has been in place for several years (it must be over ten years) and from a walking point of view, it provides a high level of service. High Street is one-way for traffic and it is bypassed neatly by the two-way Old Pier Street (forming part of the B1034) and so in theory, most people don't need to drive into the street unless for access.

The streets accessible from High Street don't go anywhere (mainly dwellings), although Mill Lane serves a car park which probably generates more traffic than should be in the High Street. There is also quite of bit of on-street parking provision which is not necessary as there is parking very close. There is some loading space which does restrict footway width when being used. Let's look at some photos; 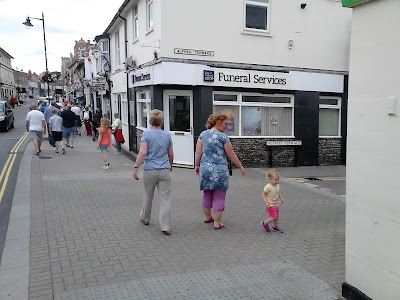 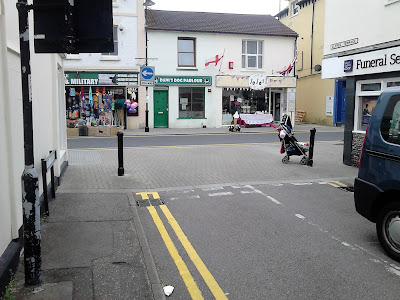 The block paving starts well before the junction and continues into the side road to give visual priority. The give way line in the side road is set well back to further reinforce the fact that emerging drivers are entering someone else's space. The yellow lines also assist with visual priority, but the area is in a Restricted Parking Zone which states that parking should be in marked bays only and so is superfluous. It wasn't there the last time I visited, so I assume it was put in to appease those claiming to be caught out by lack of yellow paint which is a shame. 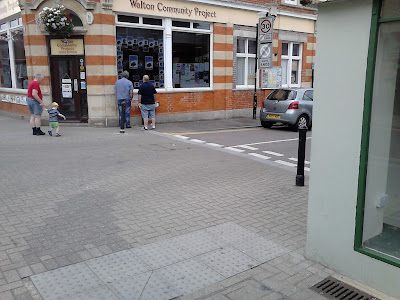 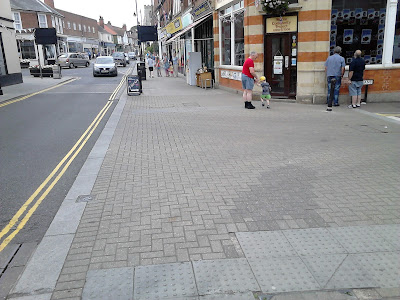 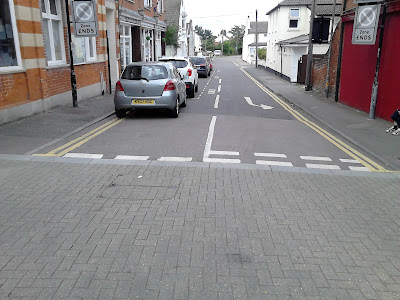 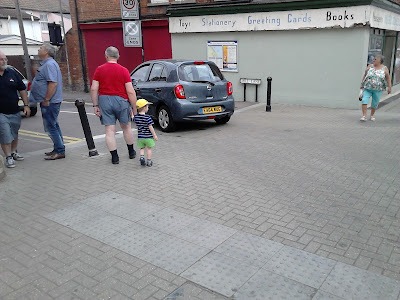 The four photos above are all of the junction High Street with Mill Lane. Interestingly, there is "blister" tactile paving on each side of each junction along the High Street and I wonder if it shows caution on the original designer's part or is the result of local consultation with visually impaired people who may have had concerns about walking in an area where drivers previously treated it as their own. If anyone has views on this I'd be grateful for feedback. The tactile paving is in an area which vehicles could over-run and so maintenance could be an issue.

I have had a look at the casualty history for the site as it turns out that Essex County Council has the information online. Between April 2011 and March this year (the data available), there was one collision (May 2012) at the junction of High Street with Alfred Terrace which involved a pedestrian being slightly injured by a vehicle (yes, driven by someone, but that is how it's reported). We are not given any more details, but if I were pushed, I would say perhaps someone leaving the side road was looking for vehicles coming from their right rather than people walking from their left - it's pure guesswork though. My feeling is that this is a single (recorded) injury in 5 years where there are lots of people walking and so safety (from a people getting hurt point of view) it's unlikely to be a significant issue.

High Street is a nice place to be on the whole, but the on-street parking and loading reduces footway width (and some are fairly narrow), but given the age of the scheme, it would have been quite forward-thinking when it was proposed (if you know any background, do let me know). I think it needs to be changed further and the street made a pedestrian (and cyclist) zone during the day when there are most people walking around. Those needing to access could be provided with permit exemption and loading could take place out of hours.

The Mill Lane car park is an issue and to remove the need to use High Street, it would be necessary to look at the access road between Mill Lane and Kirby Road as an alternative way to access the car park (it is currently narrow and one-way "out" of the centre). Of course, it could be redeveloped as housing!

All the above stated, it is a good example of how most traffic can be excluded from a street and pedestrians given better priority in order to to provide a distinctive place which gives a reason to linger, far better than many comparable seaside high streets in my opinion.
Posted by The Ranty Highwayman at Monday, August 15, 2016