I've been casting my eye beyond the UK again, taking inspiration from the city of Stockholm. Specifically the city's "Urban Mobility Strategy".

At 70-odd pages, it's a bit of a read (although short by strategy standards), but I want to focus on just two diagrams from the strategy as they sum up the issues and challenges for Stockholm and indeed any town or city. First is this from page 7; 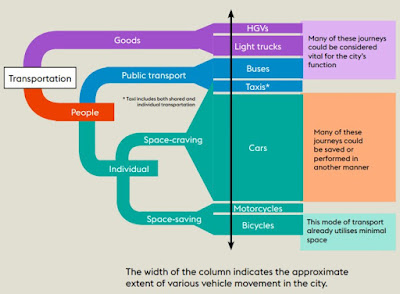 It is a really elegant way of setting out the space that (road) transport modes take and the competition between traffic (in its widest sense) deemed by function and whether it is considered to be vital for a city. Pedestrians are absent from the diagram which is a little odd, but the document does correctly realise that people walking are traffic and states they should be at the top of the planning and providing hierarchy. Trains/ light rail is not on the diagram as this is about streets (although trams are always a potential part of the mix). 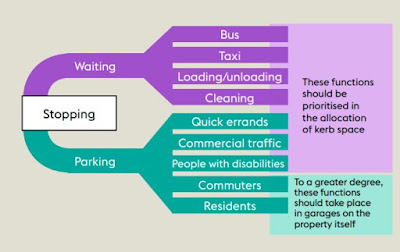 There is recognition that on a street, "stopping" is either to wait or park. Waiting is of course a transient activity, whereas parking is generally longer, although the middle part of the diagram considers shorter term parking.

In those two images, we have our choices laid out for us. Street space is a finite physical resource and although we do have the fourth dimension of time to play with, there are decisions to be made. Now, assuming we're into the efficiency suggested by the two diagrams, where does it leave us? Yes, we're into carrot and stick and this is where I leave Stockholm's strategy to expand to a few practical ideas. Make no mistake, none of what I am about to write is new, clever or revolutionary, it's just we seem to do "things" without the thought of integration.

The Carrots
These need to come first and the single-largest carrot comes from providing infrastructure to give people genuine alternatives to the private car and this will involve giving space over to walking, cycling and public transport. This is absolutely pivotal, because without genuine alternatives, any policy is going to be derided as anti-car/ anti-driver and we know where that ends.

We don't need to build everything at once of course, but there must be focus and determination. Schemes such as London Embankment cycle track represents a tiny amount of road space, but already, it is moving 5% more people than it did before. For sure the route is conveying huge numbers of people on cycles and is a step change from what we've seen before. Of course, there will be many people who have reassigned to the route because it feels much safer than their old route, but in a way it doesn't matter as they have a comfortable route now. The new people have seen these people use it and realised they can do so to. The trick now is to build on this and provide parallel routes with the same quality which ends up as a the base grid.

We might also look at key walking routes in our towns and cities. For example, a main railway station and area of offices could be reworked to give wider footways, motor-free areas, rest on green (man) crossings and single stage crossings to make things comfortable and easy - half a mile can be walked in less than 10 minutes. We've done this well in places already and if the station is in the town centre, there are of course huge improvements for walking generally.

Buses probably need to be unravelled. We often have indirect routes in pursuit of trying to have entire populations within a certain distance of a stop. Perhaps a better solution would be a series of radial and orbital bus routes combined with time-based ticketing. One might need to change buses because of a lack of round the houses route, but if the routes are high-frequency, stops are well-sheltered with information and you don't have to buy another ticket, then there could be some good time savings, especially if decent priority is given to buses.

Freight needs to be moved around as well as people. We can't carry on with 40 tonne lorries being used for deliveries everywhere (even smaller 18 tonne lorries are still way too big for many urban places). We need to look at freight consolidation centres on the outskirts of towns and in larger conurbations, consolidation hubs. If there is integration with rail, we get more options for long-distance movements. Local deliveries can be undertaken by van and cycle. Why not get groups of businesses to collaborate and consolidate their goods such as London's Regents Street? This is an area Business Improvement Districts (BID) could really lead on. Less traffic movements and better deals for businesses.

We will need some delivery vehicles in town, as well as service vehicles for refuse collection, cash deliveries and postal services and in those cases, kerb space should be reserved for loading, rather than private car parking. The thing about deliveries is that they have to be reliable because businesses operate "just in time". Perhaps some arterial routes should be designated as freight corridors and lanes given over to deliveries. It doesn't have to be peak time, but a decent window could be given to ensure the goods of a city can flow and will allow logistics firms to plan their delivery slots when they know they have a clear run.

Park and ride is often touted as a solution to city transport and if done well, it can make a difference. In order to make that difference, services need to be reliable and frequent, so bus priority measures are needed to that buses are not sat in the same traffic jams. From what I gather, patrons are also very price-sensitive and it doesn't take much to scare them away. I would say that park and ride takes a lot of infrastructure to put into place and it does need out of town space for car parking.

The Sticks
I'll level with you, this is going to have to be anti-(private) car because of space (as on the first image), but if we are giving people the choice carrot, we can then apply some stick - it can and probably should be subtle and gradual. Congestion charging and road pricing are always talked about, but as single measures, they're too blunt. Unless we are giving people genuine choice, then road pricing facilitates driving by the better off and everyone else either pays a greater amount for their travel or get priced off the roads (if they could afford to run a car in the first place). If you have no genuine alternative, then it's a tricky position to be in.

The approach set out in Stockholm's strategy is that private parking should be off street. In suburbia, this is often possible. In city centres, such a policy would mean that property developers have to think about rentable/ saleable residential/ commercial space or parking. Of course, a city centre car park with high charges still remains an easy choice for those who can afford it and this is why (in the UK at least), many local authorities are reluctant at cutting such availability because it is seen as an important revenue stream. Perhaps there might be better incomes from commercial and residential space long term where the building ownership is retained by the local authority?

There are issues with vehicle storage in terms of the land it takes and with on-street parking, it is space which could (and should) be used for other things. I think the key is to go after destination parking first because you can have all the cars you like, if there is nowhere to park at the destination, it's pretty pointless driving there; why do you think that out of town shopping have so much parking! We can reduce the number of public parking spaces each year bit by bit and this will start to give people a push (remember, we're investing in proper alternatives). Perhaps we start on the big roads and the space released can be used for cycle tracks, bus priority and loading. Destination parking is also a proxy for trip generation, so cutting back on it means less people are likely to drive.

For private parking, it has to be a workplace levy such as Nottingham's which has gone into tram and public transport improvements, with the idea being mulled over by Oxfordshire. It is a golden goose as eventually employers will realise that their car parks are costing them two much and they'll be put up for redevelopment, but that's not bad thing. In cities with decent planning policies, developments can attract levies for transport improvements - this is what has helped fund Crossrail in London. A levy means that the parking provided at the end of the journey now pays back some of the externalities to the local authority in terms of maintaining a fat road network previously there (by design or evolution) for low occupancy private driving. All the time, we are looking to reduce motor trips and then to rebalance the capacity for other things.

Where we have been changing road networks to assist freight, the flipside is we need to look at banning large vehicles from small streets. As we switch to hubs and consolidation, we can make this a reality with weight limits which exclude large vehicles. We can do this now, but it raises objections from those wanting to take large vehicles into tight places, so we have delivery/ access exemptions; so it's why we need the carrots as well. Even refuse trucks are too big in many locations and so there will often need to be a shift to smaller vehicles, although their use in residential areas doesn't create huge flows and if we start getting rid of some on-street residential parking, they (and fire engines) will have half a chance of getting through.

Breaking the syndrome
We have our own motorised Stockholm Syndrome in the UK; we've been captured by the car and the politics of cars giving unlimited mobility. We trust the government to provide for driving (as in today's Autumn statement) and of course, we have great affection for our cars.

We don't see national leadership and so it is left to local authorities to try and make change happen, but while this localism is great in theory, it always seems to have government interference when real change is sought.

Change is not simple. It is not about dealing with single modes or aspects. We need area-wide plans and strategies, linked to funding and with proper objectives and outcomes. I'm afraid there seems to be few places willing to try to enable real change and the future remains bleak.

I wrote my first blog post just about four years ago, where I asked "what do we really want". Looking back, it only seems to me we want the current mess to persist, despite that fact that it starkly doesn't work.
Posted by The Ranty Highwayman at Wednesday, November 23, 2016