I blogged about kerbs over three years ago and this week, I return to the subject (albeit briefly).

In truth, this is more of an update on kerbs and their use with stepped cycle tracks (from a UK perspective). Believe it or not, there have been some UK kerb developments, but I think we are still missing tools which would really make things easy (which the Dutch already have been using for years).

You might want to get up to speed by reading my previous post, but the key reasons we use kerbs are as follows;
In designing cycle tracks, these principles hold, because we are ultimately building little roads for cycles and so we need to use kerbs as part of that process.

Using kerbs as restraint to prevent vehicles leaving the carriageway is clearly very important as is providing demarcation. The way in this can be achieved varies considerably, but in general, it leads to the position that kerbs next to motor traffic are there to stop (or at least discourage) encroachment into cycling space and that kerbs use to demarcate space from pedestrians should be forgiving.

Stopping encroachment by traffic is a matter of degree, and depends on the height of the kerb face presented to the carriageway (as well as the amount of lateral space between the carriageway and the track). The usual type of kerb found edging a carriageway in the UK will be half-battered (HB2 type) with a nominal "face" (or height) of 100 to 125mm; 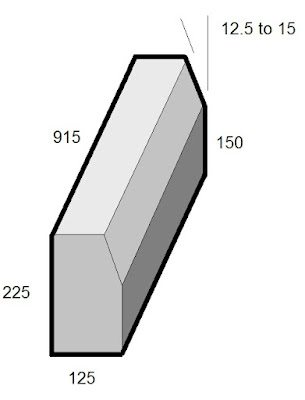 As common with UK kerbs, the unit is 915mm long (3 feet). The overall height of the kerb is 255mm, it's 125mm wide and on the face, the top section is battered back from the vertical by around 12.5 degrees. If you used this type of kerb by the carriageway to support a stepped cycle track, there is no particular issue until we get to driveways, where we would drop the kerb height down to 25mm (using a transition kerb and a bull-nosed kerb; a bull-nosed kerb is square rather than battered with a rounded "nose" at the traffic side). 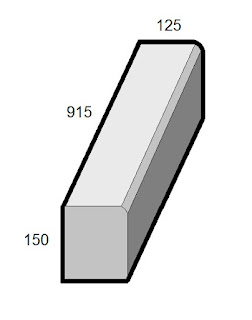 The traditional way of doing this in the UK leads to the path dipping to meet the low kerb. I've explained ways of dealing with this issue for footways before and the same techniques could be employed with cycle tracks; 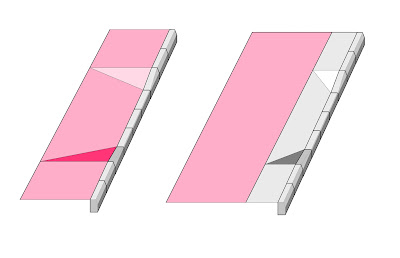 The image above shows the typical way we have dealt with transitions to driveways on the left. If this is a cycle track, it leads to a very uncomfortable experience, especially the further right we get. For people using tricycles, the approach is highly likely to tip them over. The image on the right shows a buffer strip within which the transition is made, but in which the track is kept with a nice and constant shallow crossfall (1 in 50 works well for drainage); this pitfall can be seen on this example from Leicester below; 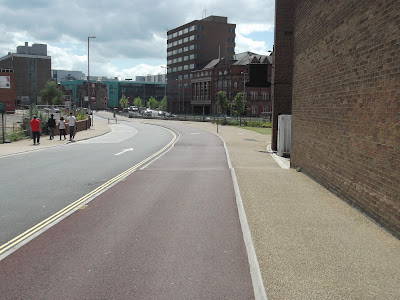 The buffer zone can be as wide as we like - indeed, if it is a couple of metres, then it can be grassed and planted with trees which gives lots of protection from the traffic and in the event anyone falls off their cycle, it's into a verge and not live traffic. Such a wide buffer might not be possible and really, anything getting down to half a metre would need a different approach using quadrant kerbs.

This is all well and good, but relies on being a bit clever with UK kerbs. What we really need is a UK version of the Dutch "inritbanden" kerb to provide a transition from carriageway to stepped track; 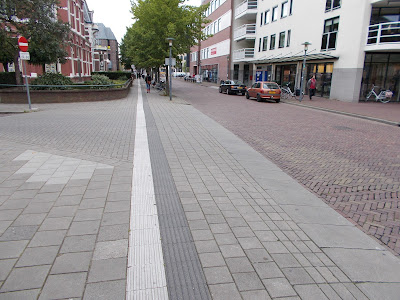 The photo above is not of a stepped track, but the kerbs I'm interested in is the row by the carriageway edge which ramp up to footway level. It would be very simple to make these to UK dimensions, but they do of course still rely on using a narrow buffer within which to lay them.

In those tight areas, we might feel that the buffer is a luxury we can do without in terms of maximising track width. In these cases, if we are trying to keep the track nice and level, we have two options. First, we can keep the track at one level and use ramped kerbs from the carriageway to the track as used here in Cambridge; 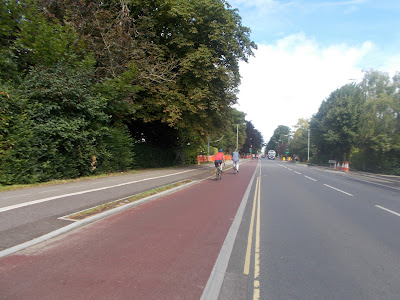 The kerb next to the carriageway is called the "Cambridge Kerb" and is made by Aggregate Industries. The kerb is about 35mm high and is sloped. From a cycling point of view, it's easy to ride up and down at a shallow approach and so it's forgiving. It's also easy for drivers to do the same thing and so it is less useful in preventing incursion.

The other way to do it is with standard kerbs, but keeping the kerb face lower than the standard 100-125mm and dealing with transitions over a longer distance than the usual single (915mm) kerb. A bull-nosed kerb with a nominal 65mm face gives a reasonable amount of protection from moving traffic and if we transition up and down to the 25mm kerb at driveways over two kerbs (1.8m), we get very gentle level changes. Even close to the kerb, the ride is good and the change in level negligible, even on a tricycle; 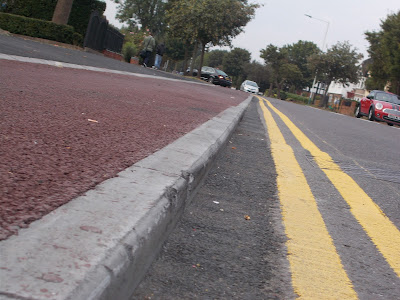 It's hard to make out, but above is a track with a constant level at the rear and a low (65mm) bull-nosed kerb at the front. Transitions from the higher bull-nosed kerb to the 25mm at driveways occurs over 1.8m. It's a compromise, but works well. It's also rather complicated to design and so needs a bit of effort to get it to work!

With stepped tracks, there is always a possibility of drivers getting onto them. The layout using bull-nosed kerbs is less likely to be encroached on under normal traffic speed, but at low speeds, drivers can mount the track reasonably easily, especially at the driveways. This can be useful in the event they need to move out of the way to let an emergency vehicle through, but it is very tempting for people delivering to park there.

So much for the carriageway side, what about the other side of a stepped track? We are starting to see some fairly decent cycle tracks being built in the UK, but we often struggle where they are next to a footway. We cannot treat cycles like motor vehicles here and provide a vertical kerb to prevent incursion onto the footway. Well, we could, but high kerbs (over 60mm) will catch pedals (as on the photo below) and low vertical kerbs can grab wheels. 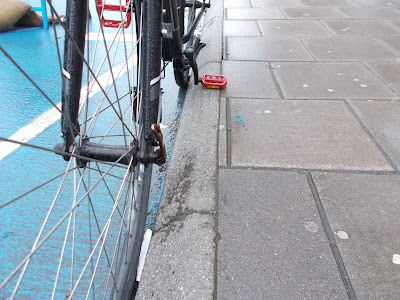 We've often deal with the demarcation between cycle tracks and footways with a special 200mm by 200mm block with a raised centre section of up to 20mm (with sloping sides) to act as a tactile warning to visually impaired people (see the photo below). Unfortunately, it's use often goes hand in hand with acres of tactile paving which is a pain for people walking and cycling; 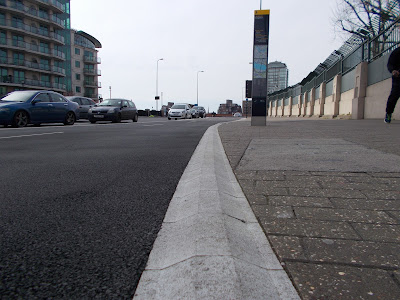 The advantage of this demarcation block is that people using cycles for mobility purposes (such as a hand-cycle) can easily bump over the block to leave the cycle track (at a shop for example). Personally, I prefer a step down to the cycle track as it helps define clear space. 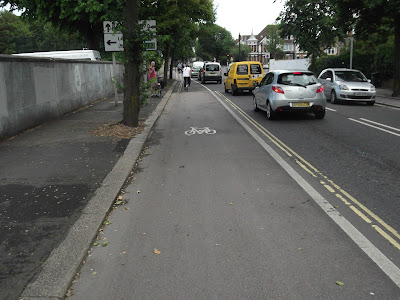 The photo above shows a stepped track, but the kerb at the rear is vertical and so can grab wheels and can be difficult for people to bump over, so we need something better. 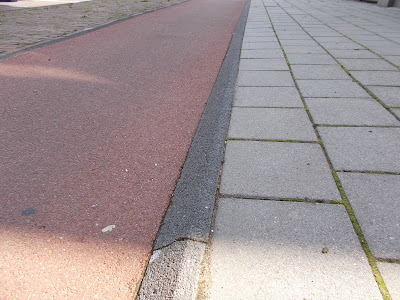 The photo above shows a Dutch cycle track and the demarcation kerb has a slope of about 30 degrees and so meets the objective of being forgiving and can be bumped over if needed.

In the UK, we don't have this profile, we have a full-battered or splay kerb with a 45 degree slope; 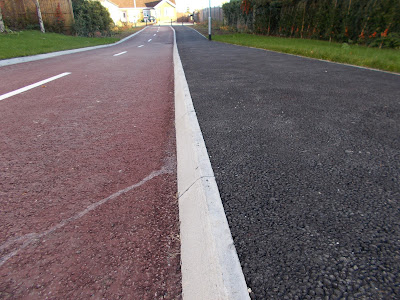 It's clearly more forgiving than a vertical kerb, but with a 75mm face, it's still a pedal catcher. I don't recommend bouncing up and down such a kerb too much, it's still too steep, but it's fairly forgiving. Some have used this type of kerb, but buried it deeper to get a lower face; 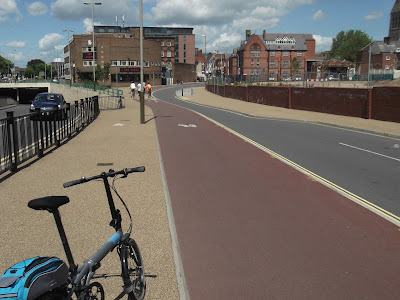 The trouble is, this is still a bit of a wheel grabber because the angled area is just too narrow. The Cambridge kerb would provide a perfect solution here, but it's only available as a full-height (255mm) kerb which is over the top for cycle traffic and (I understand) requires a minimum order of 1000 metres! A half-height Cambridge kerb (150mm) would be the idea solution.

However, we do have another kerb we can play with and it's off the shelf. Going back to the half-battered kerb I mentioned earlier, it is available in different sizes, including a 150mm high variant (HB3); 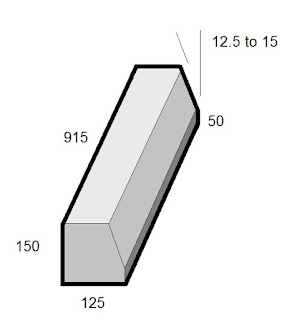 It has the same profile as the full height kerb, but it has been shrunk to give less on the vertical part on the bottom. This profile is more usually used on bridges where the half-battered profile is wanted, but where there is no need for a deep kerb (as the surfacing goes onto the bridge deck rather than having a thick road construction). We don't use it like this for cycle tracks, we need to apply some lateral thinking;

By turning the kerb through 90 degrees and laying on its back, we get a gentle and very forgiving slope with an overall upstand (or step down) of about 35mm; 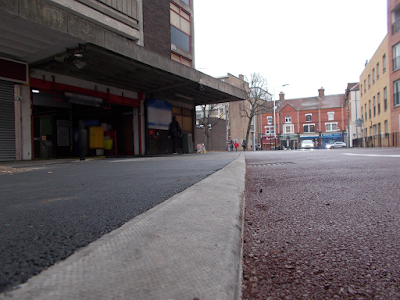 One disadvantage with using this kerb in this way is that because the elements are straight, we cannot lay it to tight radii. Actually, this is a distinct advantage as it stops designers proposing stupidly tight corners! You can just about get away with an internal radius of 8 metres and so it keeps the track flowing nicely.

When we put a decent and forgiving kerb at the rear of a stepped track and the best traffic deterring kerb we can at the front (with a buffer if possible) then I think we can provide some pretty decent infrastructure. The other advantage of stepped tracks is that we can take space from the carriageway by building up layers, rather than digging down and this is great because it generally avoids the need to get involved in the costs and effort of dealing with buried utilities. Therefore, they represent a pretty good way to retrofit our streets. But, details are everything, including how we use the humble kerb.
Posted by The Ranty Highwayman at Sunday, January 29, 2017