The wonderful thing about technology is that thanks to mobile phones, I've generally got a camera with me. The downside is I take photos of boring stuff and then blog about it!

This week, I was running early for a meeting in Westminster and so went for a walk to kill time and I spied some footway works being undertaken. I took the following photo of some tactile paving. 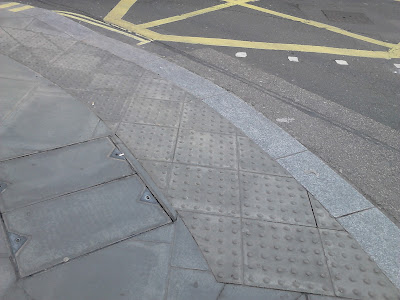 The works on Victoria Street were a little further along and it looks like this paving was done last year, but no matter, there is learning here. So what is wrong?

The first point to make (or repeat if you're a regular reader) is exactly who is this paving for? It's essentially to provide guidance and warning information for visually impaired people. The full detail is on my post here. This style is called "blister" paving and is is used to help people find the edge of the footway at a pedestrian crossing point. Such crossings need to be flush with the carriageway surface to assist people on foot, wheelchair/ mobility scooter users etc and so the paving is needed because some people may not realise they are walking into the road.

Current UK guidance talks about "controlled" and "uncontrolled" crossings; the former are zebra and signal controlled crossings (green men), the latter everything else. My photo is of a controlled crossing (signal-controlled junction where the guidance states that the tactiles should be red in order to provide a colour contrast with the surrounding paving. There is relaxation in a conservation area situation where red wouldn't be in keeping and in that case, a contrast should be provided. In this case, we have light grey paving and light grey tactiles and so it fails the contrast requirements.

Next, we have the shape. Current guidance in this situation would have at least 3 rows of tactile paving (1200mm) behind the kerb to reduce the risk of someone stepping over it/ not detecting it and realising it's an "in-line" crossing and a "tail/stem" 3 tactiles wide going away from the dropped kerb (forming an 'L' shape) to help people locate the push button. The image below is from the guidance. 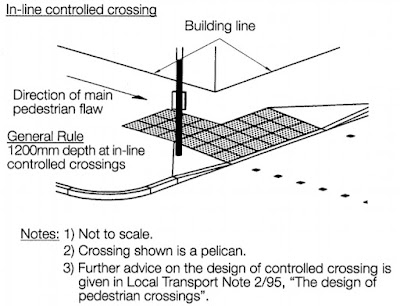 Now, there was a consultation in the second half of 2015 for some interim changes to the guidance which I commented on at the time. In this situation, the changes would allow the back of the tactiles to be cut into a curve parallel at the front if on a kerb radius. The proposed changes did not remove the requirement for the stem and they did not propose a change to the 1200mm depth of paving at in-line crossings such as this. At the time of writing this, no official guidance changes have been made.

I suspect that the reason that 800mm without a tail was selected relates to Transport for London's Streetscape Guidance (it's nearly 32Mb!). Part E of the guidance deals with crossings and in terms of tactiles, it notes departures from the National guidance on p132 in terms of radii where the 800mm constant width can be used to avoid large areas of tactiles; that contrast is more important than colour; that it's own research with University College London in 2010 shows that 800mm is readily detectable and the crossing of tails can be confusing. Importantly, TfL advocates proper recording of why a layout would depart from National guidance.

My personal view is that TfL may be right and they certainly have the resources to challenge the National position (they did on cycling infrastructure), but the designer of the tactiles in my photo has certainly ignored the contrast requirement! As ever, there is conflicting views on how tactile paving should be used and the risk for users is that consistency gets eroded. Ultimately, if guidance is updated with the support of user groups, I am more than happy to follow it! I digress.

The issue of tactile paving on radii is also problematic because it means the grid pattern of the blisters can be mistaken to mean the crossing is perpendicular to the intended direction. The photo below shows the intended crossing direction with the green arrow. The red arrow could have people walking out into traffic. 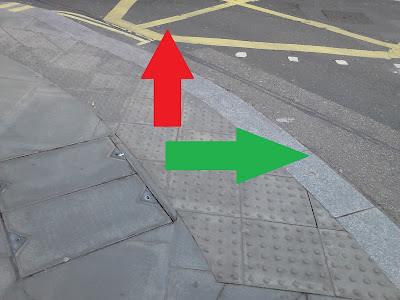 There is debate as to whether visually impaired people use the blisters to align themselves (and I mean debate from users; other people's views are a distraction). Since I last wrote about tactile paving, I undertook some accessibility training and part of it was delivered by someone with a guide dog (who sometimes uses a long cane). As well as classroom discussion, there was a practical walk around town.

On the subject of blister paving, the trainer's view was that it was useful for him to know he was at the edge of the road, but as he was listening to traffic position, the orientation didn't bother him. He did stress that everyone had their own way of navigating and so direction was useful to some people. That's a good enough reason to try to avoid this trap if you ask me. Of course, to have crossings on straightish kerb lines, we have to tighten up junctions or inset crossings which brings other issues. I guess that's why we have engineers!

Back to the photo. The issue with the 800mm constant width being used is not only do we have to fit the paving at the kerb side, we are then forced to fit it in at the rear. We end up with loads of tiny pieces of paving as identified below if we don't know what we are doing. The purple circle at the top left shows the tactiles being cut diagonally to "bend" the footway gradient. It's not good practice as slopes need to be consistent across their width. 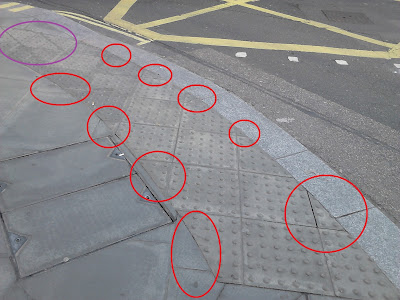 The problem with small pieces is that they are more likely to come loose and become a trip hazard. Trip hazards are bad enough, but they are particularly dangerous where someone might fall into live traffic. Not only do the tactiles have small pieces, the large element slab paving has them too. With some proper thought, it is possible to cut the slabs correctly. Ideally, we have nothing less than a half width slab (200mm x 400mm); 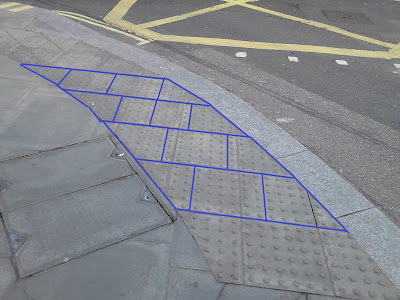 So, although the decision on the overall layout is down to the designer, the cutting of the slabs is down to the contractor. You could blame the person checking the work from the local authority, but it is the contractor's job to check their own workmanship in the first instance.

The one thing I'll guarantee is that for people with even a passing interest in streets, tactiles get the opinions flowing. Guidance on the subject is only as good as the help it gives to the end user, but I do think the "look" of things is sometimes more important than making things accessible for all and on that point, we do need to take a lot more care.
Posted by The Ranty Highwayman at Saturday, January 21, 2017