Stories From The School Run: How Can We Get Change?

This week we ran the little pop-up event "Stories from the school run" (or #schoolrunstories on Twitter) and as with last year, it was about people just trying to get their kids to school actively, despite the conditions.

Experience does of course vary across the country, but most people will just be getting on with it and they don't have the time to lobby for change (let's face it, most people are just trying to get on with their lives generally). In the meantime, aside from relatively isolated pockets, people and their children struggle to walk along footways parked with cars, cross busy roads and let's face it, cycling is often an unusual form of school transport.

How can we crack this? It's an issue which has fluttered across my mind from time to time and this week it was back front and centre because I had a meeting with some local schools to talk about school travel. To set the scene, the meeting was with two primary schools which are very close to each other and share the same issues on the surrounding streets such as parking, speeding on the main road, lack of crossing opportunities and no protection for cycling at all. The meeting was small, just head teachers and a couple of governors, but they were eager to report back to their children who are very interested in their own travel options.

The location of the schools has a public transport accessibility level (PTAL) of 2 (poor). Most of the surrounding area has a PTAL of less than 2 (some with zero). We're very lucky in London as Transport for London crunches lots of data and turns it into useful tools such as WebCAT. One of the schools is a gold accredited STARS school (again, London has a TfL-run system, although Modeshift runs one elsewhere) and the other is a bronze school.

In essence, gold STARS accreditation means that the school is doing loads of things to try and encourage and enable pupils and parents to ditch the car and indeed, gold schools are often trying to build links with the community to look at common issues (and helping other schools is one of them). This gets me to the point. The gold school is pretty much doing everything it can and impressively, only 9% of pupils are driven to school. The problem is that those 9% still generate plenty of vehicle movements and so they want to do more.

At least with the limited sample of "gold" schools I have discussed school travel with, they have worked as hard as they can to make change happen, but they are now up against the final challenge. This is of course, the streets that surround them and on which their parents and pupils travel; this needs action by the local authority and not to put too fine a point on it, councillors with determination to allow change to happen.

This is all fine for those places where the politics have shifted beyond the end of the bonnet, but what about places still stuck in the past? For what it's worth, I think there is a role for some engineering subversiveness. Don't worry, it's nothing dodgy, it's simply engineers using their skills to help someone imagine how a street could be transformed and believe me, schools (as a community) have huge imaginations.

With the schools I met this week, the seed was sown at a school travel conference I spoke at 3 years ago as one of the heads remembered my photos of infrastructure; believe me, photos and images sell more aspiration than thousands of words ever could. The aspiration (and inspiration that matter) had made it into the gold school's travel plan which in terms of engineering measures was fairly simple;


For my mind, the only thing I would add is something about filtered permeability, but these ideas are home-grown by the school without any help so far and it shows that in actual fact, people do know what is needed to be done, it's just they are not sure of the how it is done.

I then produced a couple of photos of infrastructure that we have managed to get built locally and a mock up of the main road outside the schools done in the wonderful Streetmix; 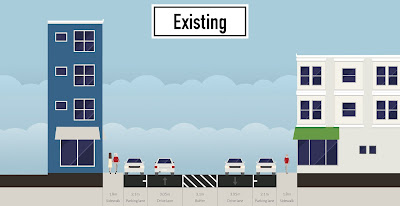 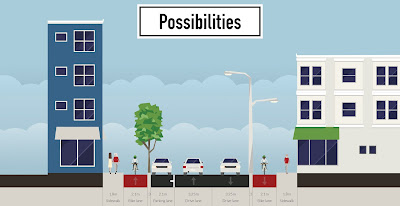 It was at that point that the penny completely dropped (and it was already well on its way down); those at the meeting could now see how their local streets could be reworked. They were interested in the relationship between carriageway width and driver speed, how parking bays alternating on each side of the road could change the alignment of the road and that in fact there was space for cycling.

During my journey exploring how engineering can bring about active travel, I've often heard about the UK not being the Netherlands. In the last couple of years, we've seen some high profile work being in this country. Locally, it's been very much "well that's central London" and so despite their isolation, local examples have made it so much easier for local people to understand what can be done.

Anyway, back to the point. The schools I was meeting have realised that writing letters to the council is not the way to get change and so their plan is to work on their travel planning jointly (which will bring the bronze school up to speed) and then to develop a school travel vision to take out into the community. They have realised that between them, they have the children of hundreds of families attending and these families (and their friends) is a community of thousands of people who need to be convinced that change is possible. On the politics, well there could be an unstoppable force on it's way to challenge that.
Posted by The Ranty Highwayman at Saturday, April 29, 2017