Missing The Point By A Mile

I'm often reading about how cycle tracks (and I mean tracks, not painted lanes) are empty off-peak and this is a reason why they shouldn't be provided. At best, this is crass ignorance and at worse a calculated play by people with something to lose from providing for active travel.

It should be clear to anyone with a modicum of understanding of how transport works, that at peak times the chances are that it will be busy and this will hold true across all transport modes. It therefore follows that off-peak, there will be less people travelling. This is a really simple and basic pair of facts. OK then, if we now think about capacity as the amount of people we can move along a bit of infrastructure for a given length of time, and demand as being the amount of people who want to move along the same bit of infrastructure for the same given length of time.

I don't think I have stated anything particularly baffling and to take this just a little step further, where demand exceeds capacity, then those people trying to move along that bit of infrastructure will experience congestion and delay.

Let's now imagine that we are a government (local, regional or national, it doesn't matter) and we want to get people travelling in a particular way. At a national level, we might think that everyone having the wondrous freedom of driving their own motor car is the way forward and so we start to add capacity to make our chosen mode more attractive because we don't want our voters inconvenienced by traffic jams - OK, you don't need me to go on, you know where this leads.

At the regional or local government scale we generally don't have the space to keep adding motor capacity, unless we fancy knocking down some homes or tarmacking the parks (and some UK local authorities are perfectly happy to do this), so the challenge is to use the space we have efficiently to move people and goods around.

With congestion (regardless of mode type), there is always the debate about making sure delays aren't too great, otherwise people might not use that bit of infrastructure. On the other hand perhaps we don't want to have the capacity way over demand as then our bit of infrastructure will seem superfluous and profligate. The problem here is that we will always require a basic amount of space for a mode to function, be footway width, the number of rail lines, traffic lane widths/ numbers, runway width and length; and indeed cycling infrastructure.

So, with a combination of having basic functional space requirements (and I mean that from a practical point of view) and the off-peak situation, we are going to see quiet times. This could be quiet train carriages, an empty dual carriageway or an empty cycle track. It is the latter which we often see this strange outrage against and especially where the person frothing makes some comment about that exact space being needed for peak driving times which coincidentially, is exactly the same time more people will be cycling or want to cycle.

Any idiot can take a photo of empty cycle tracks, and equally, of empty roads - and I frequently do! Part of my commute is next to dual carriageway which is pretty quiet off peak as it's capacity purpose is to stuff people into and out of our part of London twice a day. Off peak you can usually catch a gap between traffic signals and therefore one can show empty tarmac; 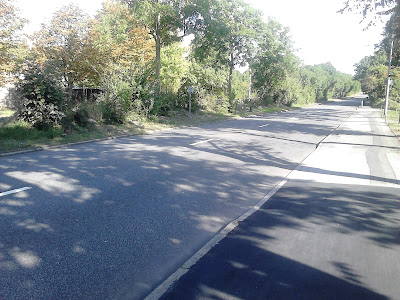 The photo above shows one side of an empty dual carriageway and indeed, an empty shared-use cycle track. What does this tell us? Absolutely nothing perhaps - it was just that I could easily pick a gap between traffic signals to show. Actually, it tells us a fair bit. First, we have a dual carriageway which was built for a reason and at peak times, it is busy; 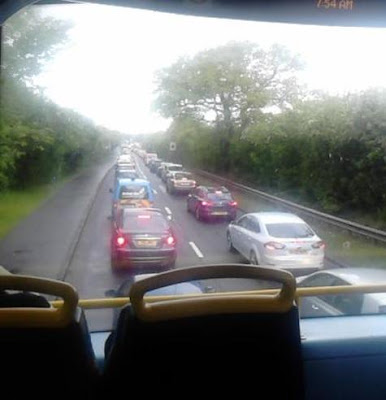 As you can see above, bus passengers have to sit in the daily traffic jam with the empty shared-use cycle track sitting next to them. However, there is a basic amount of space one needs to get that bus along this trunk road. We can have a debate about how many lanes we should have (and indeed if there should be a bus lane), but there is a basic amount of practical space needed on this type of road.

The shared-use cycle track is narrower than one of the traffic lanes, but in terms of space, it's probably a reasonably practical minimum, although in certain locations, there is conflict with pedestrians. That aside, for this type of (approximately) inter-urban road, a cycle track like this will need to be this wide even if lightly used by people cycling. Taking this space away at peak times to build another traffic lane will deal with congestion in the short term, but it will bar the few people cycling on or off peak.

The other issue about my local dual carriageway is the one of community severance. The crossing opportunities on this road are roughly one every 350 metres. There is a subway in one location and some signalised crossings associated with large junctions, but the rest of them are informal gaps in the central reservation like this; 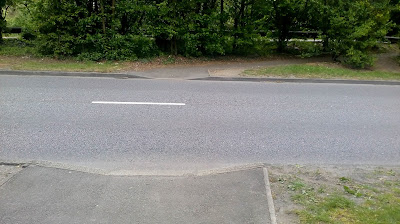 Someone wishing to cross on foot or cycle have to wait to find gaps in the traffic to cross (and then the same on the other carriageway). At peak times, gaps take ages to find and off peak, drivers are faster which means finding a gap is also tricky. These conditions will put off many people from crossing - it's the mere size and intimidation of the road creating this issue; the traffic flow is almost secondary. They are not going to walk a long way and back again to use the signals or the subway. If they have a car, they might drive because it's easier. We have placed (motor) traffic movement above all else. One might think that's appropriate given the function of this road (an arterial route), but the cost is the independence of active travel. 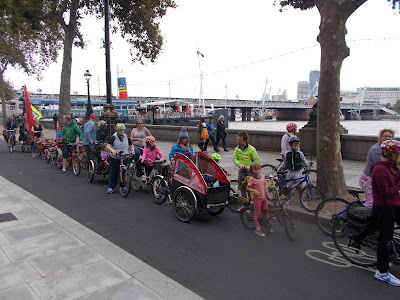 The photo above was taken at one of the London Kidical Mass rides last year; Saturday 19th September to be exact (about lunch time); on the Embankment in Central London. Those who condemn the space taken by this type of world-class cycling infrastructure (because they want "their" peak weekday traffic space back) essentially condemn this group of families to the previous conditions which were a little like this; 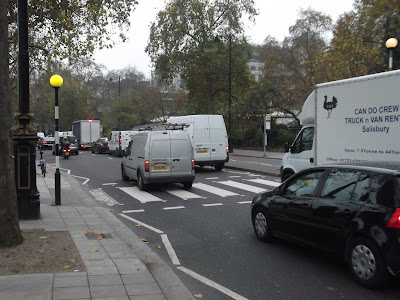 Families did not cycle here peak or off-peak, so the argument made misses the point by a mile (ignorantly or deliberately). On the matter of the Embankment cycleway (and this part of CS3 in general), Transport for London and Mayor Johnson on this issue were brave and as a result, cycle traffic has grown hugely at peak times and in some ways more importantly, we are seeing families and tourists pootling around whether on or off peak. 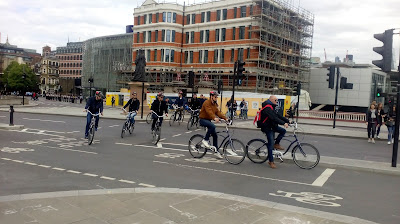 I took the photo above yesterday at about 13.15 on Blackfriars Bridge (CS6 for locals). It's a cycle tour which (in all reality) was simply not possible before this infrastructure was built. Those against cycle tracks crave this space for their peak time driving, but its reallocation has opened up parts of London to people who wouldn't be cycling at peak times.

There is a parallel of "road" capacity with cycle track capacity in that the more people we get (driving or cycling respectively), the higher the demand and eventually we get congestion. The difference here of course is that we can move far more people per hour by cycle than we can by motor car.

But, it's more than that, the provision of proper cycle tracks enables people other than commuters to cycle for their day to day transport needs, to have some exciting active leisure or (as I'm often spotting) shifting stuff around. They arguably benefit more than the commuters. 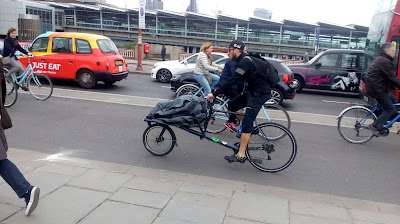