The endearing design culture of the UK places motor traffic capacity at the top of the list and nothing highlights this more than staggered pedestrian crossings.

It's a sweeping statement and one must beware of such generalisation because it doesn't apply to every situation. However, in many places in the UK, it is the de facto approach and while we continue with it, we are not going to provide a decent level of service to those moving under their own power.

It is often argued that providing staggered crossings enables crossing opportunities to be provided where there ordinarily wouldn't, but this is because of motor traffic capacity. Let's look at an example; 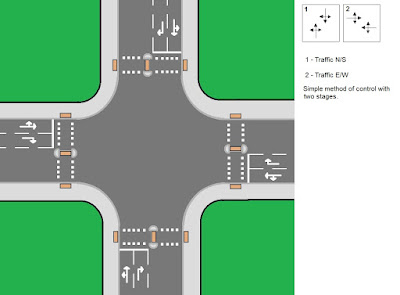 The diagram above shows a simple, signal controlled crossroads. The "method of control" is very simple and involves just two stages; north-south traffic and then east-west traffic. Those turning right are expected to find a gap in which to turn right.

From a pedestrian point of view, there are no green men and it's a case of trying to find a gap within which to cross, which is easier said than done. The crossing opportunity will be in any breaks in traffic flow or between the stages (called the "intergreen", where all traffic is held on a red signal between opposing stages). In this situation, the intergreen is sometimes made longer than is required for traffic to clear the junction in order to give pedestrians a chance to cross the road (although in some cases, drivers are savvy to this and see it as a chance to treat the amber signal flexibly).

The simplest way to introduce green men at this type of junction would be to add a third, "all round" pedestrian stage - all traffic is held and all pedestrian crossings run together. However, given that junctions are set up for an optimum cycle time (the time for everyone to get a green), the time from the green pedestrian stage would come from the two traffic stages in the case of a retrofit, thus reducing traffic capacity. If the junction is stuffed now, it will only get worse for motor traffic congestion! 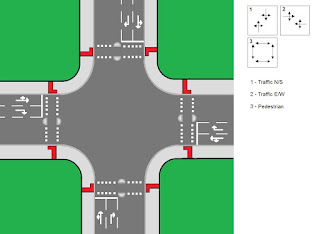 The disadvantage to people on foot here that if they wish to cross a diagonally opposite, then they have to cross two crossings and this means a longer time to cross. We can provide an "X-crossing" which permits the diagonal movement in the same time; 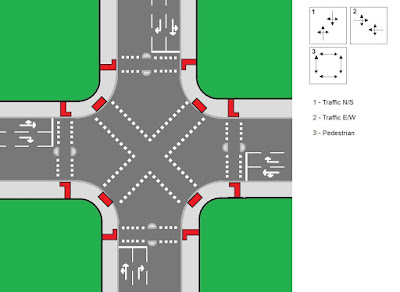 In traffic capacity terms, the X-crossing is going to have limits. Pedestrian crossing time is governed by walk distance and very large junctions will mean long crossing times and less for other movements given we are aiming for an optimum cycle time.

Many city-centre crossroads are space-constrained and in my view, the 3-stage arrangement with X-crossings should perhaps be the norm (notwithstanding the motor traffic-reduction debate). If you watch at a relatively compact junction like this, you'll often see people crossing diagonally. In London, we have made extensive use of pedestrian countdown and I think this has helped many judge the time to make a diagonal crossing. (Photo below, X-crossing outside Hatfield Station). 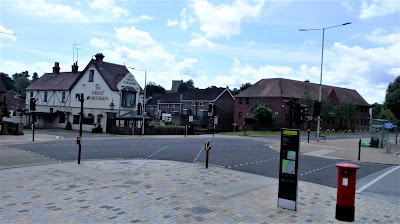 Where we have larger junctions or we are designing to maximise motor traffic through-put, the solution has often been to add staggered pedestrian crossings. Rather than being able to cross the arms of the junction in one go, pedestrians have to cross in two (or often more) parts which is often called "walk with traffic"; 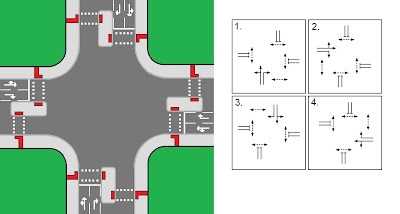 There are a variety of layouts with staggered crossings, but the one above is relatively (!) simple and assumes each arm carries roughly the same amount of traffic (which is a criteria for how a stagger would be designed). It has more stages than my early examples, but we might have heavier right turn movements which means we need to split opposing arms, otherwise right turners are going to lock the junction up (and this is all theoretical for the purposes of trying to explain it!)

A crude all-round pedestrian stage arrangement based on an 88 second cycle (for ease of maths) could be as follows (note that this is stage time, not green time);

Whereas the staggered arrangement could simply be 22 seconds per arm as there isn't specific time given to pedestrians.

If one was walking on my staggered example and wanted to cross the northern arm from west to east, then Stage 3 and Stage 4 would enable that movement. Crossing from east to west, one could cross the first half under Stages 1, 2 and 4 and then complete when Stage 3 came in. If one wanted to cross northeast to southwest, then it could be done as follows;

The photo below is a staggered crossing at the junction of Seagull Lane and Western Gateway, London Docklands. 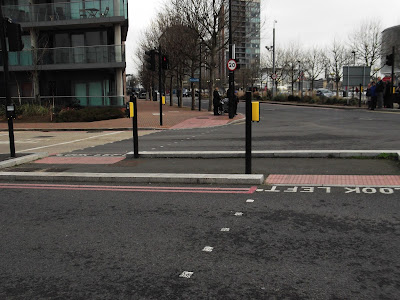 In design terms, we often end up looking at individual junctions (or groups over a network) in order to maximise their capacity for motor traffic, rarely stopping to think what the streets under this control are or for who they should be. This week, I found that the London Assembly Transport Committee is undertaking an investigation into walking and cycling at Outer London junctions.

Led by Caroline Russell AM, we are rather tellingly informed that;

"Small pockets of improvement don’t change the fact that most London streets are dominated by traffic and noise. They are hostile places even to step out into for a pint of milk."

This could apply to anywhere in the country. On trunk road-style urban roads, then motor traffic capacity is going to feature heavily, although in those cases, pedestrian (and cycle crossings) are often only provided across the main road as staggered arrangements, because adding green men at side roads creates traffic capacity issues (unless the junction is vast and has stacking space on the side roads). As we move to town centres, we still see staggered crossings in what are meant to be places where people wish to shop - indeed they are very hostile places.

I would suggest that if we take a step (!) away from thoughts of making streets work better for people walking, then staggered crossings can be a way to provide for traffic flow and safer crossing opportunities. This is sometimes the position taken by traffic signal engineers who often come at this from the numerical purity of a mathematical problem to be solved, and of course, those who call the shots are often interested in traffic capacity.

We should remember that traffic signals are there to manage conflict. Either vehicle to vehicle (including cycles) or vehicle to pedestrian. If we took the motor vehicles out, we'd not need signals because cycle to pedestrian conflict is easier to manage. When signals are removed without significant vehicle reduction, then we get conflict as can be observed in some street regeneration schemes which fail to address the key question on what or who the street is for.

There is a campaign running from British Cycling at the moment called "Turning The Corner" which is pushing for a universal rule that people walking and cycling should have automatic priority where crossing side roads. Taken to it's conclusion, this could apply at signalised junctions which would simplify the stages needed and there make them more efficient for everyone and so we wouldn't need staggers - certainly common outside of the UK. This video provides a deeper explanation (although from a USA perspective).

However, this approach would need changes to UK rules and at the moment, there seems little interest from the Government. Additionally, some people are worried that expecting turning drivers to give priority to people crossing side roads is fraught with risk and lessens the protection (perhaps perceived) of the green man - some of this risk would be mitigated with appropriate junction layouts and zebra crossings to reinforce priority, but I can understand the concern given how long we have had our layouts.

My own view is that challenging how we do things is absolutely right, but that we shouldn't be waiting for these challenges to make it into legislation. We need to keep pushing to rebalance our streets away from motor traffic, but also accepting we are going to have cars with us for some time. If we shift the balance then my all-round pedestrian stage example could mean that we give the pedestrian crossing stage every other stage, rather than every third stage.

What was gratifying to see this week was a proposal from Waltham Forest council who are clearly not waiting for legislation to change and are just getting on with modernising their road network as part of the Mini-Holland programme. The council is currently consulting on changes at the junction of Forest Road and Blackhorse Road which is a signalised crossroads featuring a staggered pedestrian crossing on each arm. The council is proposing to ditch it in order to provide straight through crossings which will operate on an all-round basis for people walking and cycling; 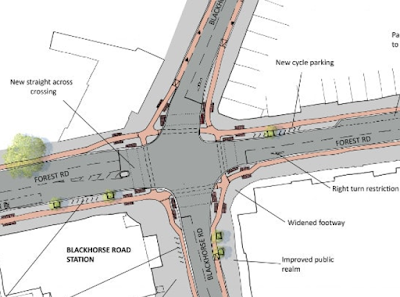 As usual, our designers can show a different way forward. It's the political job to make this change happen. What's gratifying for me is that after blogging about this kind of layout three years ago, we are getting some real life UK examples to see. I cannot claim credit, but I'll claim that I was right! 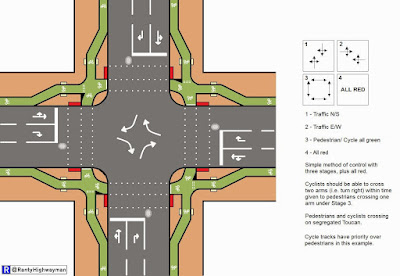 Posted by The Ranty Highwayman at Saturday, July 08, 2017