With apologies to the rest of the UK, a commonly-heard wheeze from the dinosaurs who cannot bear the thought of us developing cycling networks is the weary "but London isn't Amsterdam" cliché.

In more recent times, this has shifted a little as London has built pockets of decent stuff and so we sometimes hear "well, outer London isn't central London". When you point to Waltham Forest, Enfield and Kingston, then it does become hard for the naysayers' simple brains to process the paradox.

Obviously, London *isn't* Amsterdam, so at least on the raw geographical fact the statement isn't wrong, but it is a shorthand for people who at best lack imagination and at worst, want to continue with the mess that we are in with a misguided assumption that motoring is freedom, everyone should be able to aspire to this freedom and anything which impacts on driving takes away freedom.

This position is independent of politics because even the most pro-cycling parties often end up with local councillors on the ground getting it spectacularly wrong. Of course, there is plenty of politics too; and short-termism pervades the management of London's streets in the same way as it does for the rest of the UK.

London is not Amsterdam on the basis that the entire Capital hasn't been systematically reworked over decades after realising that the motorisation of the 1960s, 70s and 80s didn't work. In London, we attempted to paint cycling around backstreets which didn't particularly grow numbers. We've tried bolting cycling onto the footways and we've tried painting lanes on roads not being far off urban motorways and it's not worked. There are some good examples of provision, but they were implemented years ago and are showing their age.

Only now, are we starting to see what I would call proper cycling infrastructure become mainstream in design approach, but it is still sporadic and much is aimed at getting commuters into Central London; and that for me is the real reason why London isn't Amsterdam.

But what people seem to miss or ignore is the fact that London is not a single city. We do have the cities of London and Westminster, but that the modern layout of government with the 32 boroughs and the City. In fact, London is a city of towns and villages which have (mainly) sprawled out to meet each other. 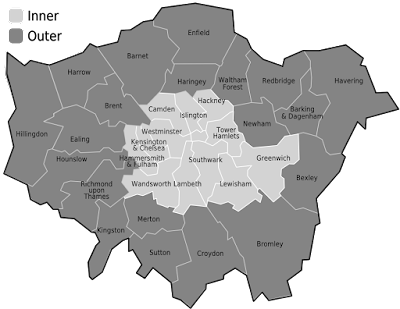 We should think of there being several types of London. We have Inner London with the distance across (Hammersmith to Greenwich) being a bit smaller than Amsterdam at about 18km. For cycling, much of the area is therefore within 5 miles/ 8km of The City and so if you happen to work there it could be ideal for getting about under your own steam.

We have Outer London from where (if we are honest) most people aren't going to be commuting by bike into The City; this will be bike, train, tube and perhaps bus. And for most discussions, that's it. What we keep missing is the towns and the non commuting trips.

In planning policy, London has a town centre network (set out in the London Plan) comprising of a couple of hundred places. There are broadly classified as follows;


There are also smaller "Neighbourhood Centres" which serve an immediate areas and the Central Activity Zone (CAZ) places such as Borough High Street.

I'm going to look at the Metropolitan Centres because it's quite interesting for active travel, especially in Outer London;

Thinking of these centres as places around which one could design cycling networks to get people into them for shopping, working, education and so on, a 3 mile radius around each one covers a pretty impressive area - 20 minutes to get from the edge to the centre. So by putting cycle tracks on main roads and filtering residential streets, we could transform these areas for active travel. 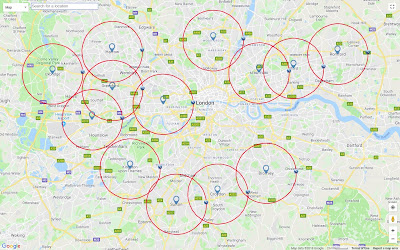 For even more impressive coverage, a 5 mile (33 minute ride) would transform even more places; 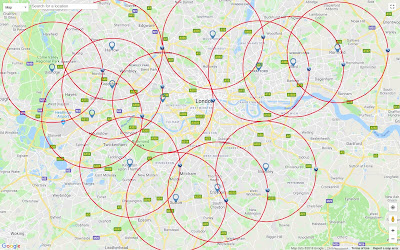 In other words, it doesn't matter whether we are talking about Amsterdam, London, or indeed smaller or larger cities, the key is to look at the town centres and redesign the streets to make access to them easy. Whether or not those towns form part of a wider city area is kind of irrelevant. Where they are, then their spheres of influence will overlap to create larger networks and where there are gaps for longer journeys, then we have public transport.
Posted by The Ranty Highwayman at Saturday, June 09, 2018