I was pleased to be able to attend the CEoGB's AGM which took place over the weekend just gone in Greater Manchester. This is the first of three posts which will explain some of what we saw.

The event followed the positive news from Andy Burnham, the Mayor of the Greater Manchester Combined Authority (GMCA) and his walking and cycling commissioner, Chris Boardman, of a plan to invest in new cycling routes and walking infrastructure across the region. You can read more about the vision, Made to Move and the Beeline proposals on the Transport for Greater Manchester's website (TfGM).

The weekend also saw the Women's Festival of Cycling on the Saturday (30th June) and the 2018 Let's Ride cycling festival (photograph below) on the Sunday with streets closed to motor traffic and all manner of events going on around the route. If you'll forgive me, there was a real buzz in the city. 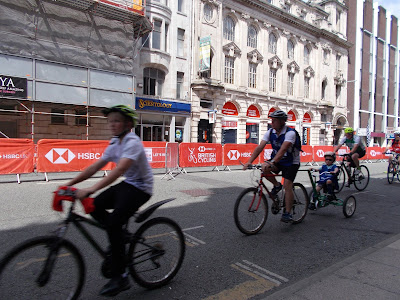 However, we are interested in Greater Manchester which is a group of 10 boroughs which each deal with their own road networks, but with TfGM providing a strategic overview (but not running any roads itself) - if I have got any of this wrong, then feel free to let me know!

I'm going to start with what we saw in Salford, which is to the west of Manchester. Our guide was Catriona Swanson, the lead for walking and cycling with Salford City Council and as well as seeing some recent work, we also had some of the City's plans explained to us such as ambitious transformation of Chapel Street. 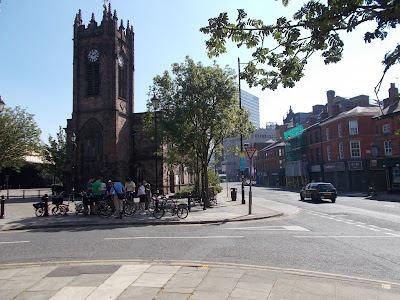 The street is currently having huge amounts of development taking place and as you might expect, cycling features heavily in the plans. Above is a photograph taken from Bury Street, looking east towards Sacred Trinity Church. The plans are radical; 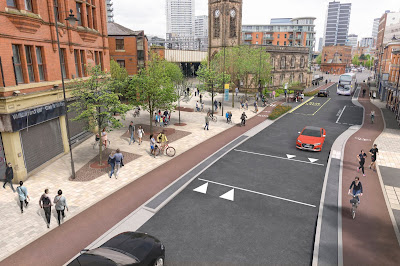 Space for motor traffic is squeezed a bit to provide space for buffered cycle tracks which, along with the footways, will be continuous and drivers accessing side streets will have to negotiate ramped kerbs so the footway and cycle track levels are maintained - could we get some Dutch-style kerbs made in the UK? Watch this space! 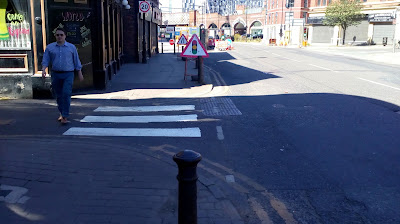 The City has also installed a couple of "implied" zebra crossings along Chapel Street such as this one at the junction with Barlows Croft. The idea is to test behaviour at the side roads because trying to roll out continuous footways across the whole city is going to be expensive. Implied because they don't meet the regulations which require Belisha beacons and zig-zags. There is a risk that drivers won't stop and by not seeking Special Authorisation from the Department for Transport, there might be liability issues with the local authority in the event of a collision.

That said, it's a layout used in other countries and if used in situations where drivers are having to slow down because of a tight geometry and perhaps in a 20mph zone (akin to other relaxations in the rules), this could be an innovation worth pushing.

It's not all theoretical. On Oldfield Road, the City has built a complete layout to give a feel on how some of its main streets could look; 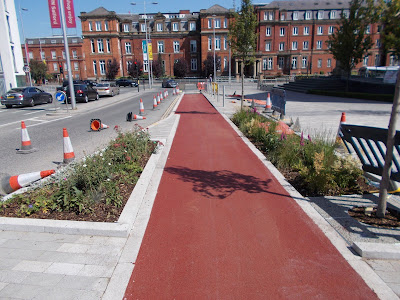 The layout is only around 70 metres long, but in taking advantage of some work which was going to be done anyway in terms of public realm improvements linked to development, the team took the opportunity to add a cycle track and floating bus stop. It looks very similar to the drawing above for Chapel Street, but the beauty is people can be physically shown how their street could be transformed. 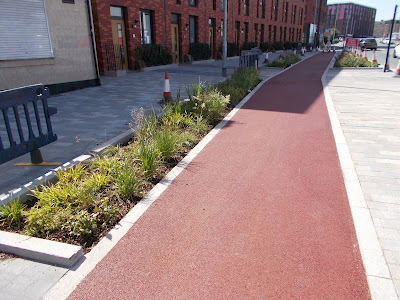 By UK standards, the cycle track is wide as it passes the bus stop which would allow (just) side by side cycling, and with none of the tight turns and annoying humps we've seen on other schemes. 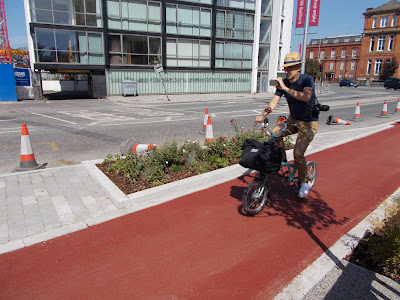 The levels have been designed to shed surface water into planted rain gardens which act as infiltration basins in combination with buried attenuation crates. Sustainable Drainage Systems (SuDS) seek to reduce the speed of run-off entering the sewer system and in many cases prevent it getting that far with infiltration into the soil. With climate change and storms getting more intense, SuDS is vital to reduce urban flooding risk. 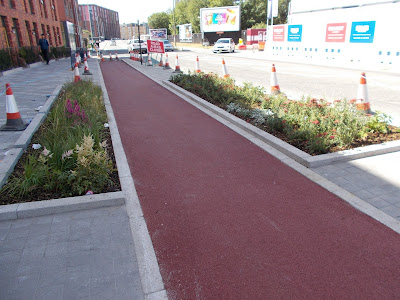 Water either flows as a sheet into the planted areas or is directed through notches in the kerbs surrounding them. 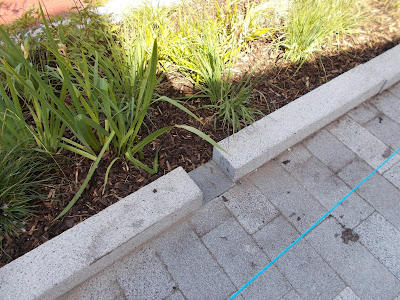 The paving is quite expensive and unlikely to be possible everywhere, but in the places where some extra polish is needed, it's a great addition. 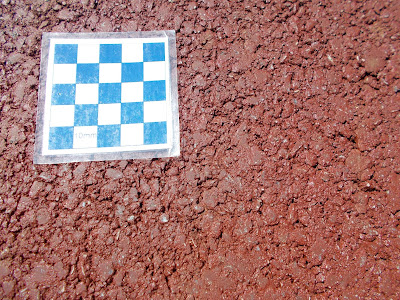 The cycle track is finished with a red 6mm asphalt and it has been machine laid to ensure a superior riding quality. The only issues with the scheme (apart from only being a short section) is that there are some low kerb upstands in places which could grab wheels if people strayed too close and so would definitely benefit from forgiving kerbs. However, as a proof of concept for a UK scheme, it is wondrous!

SuDS is a recurring theme in Salford. Here on New Bailey Street, another public realm scheme being delivered with development has incorporated another SuDS scheme. 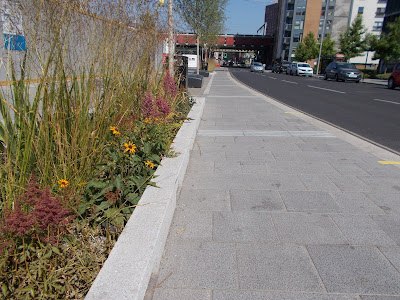 Surface water is directed through notched kerbs into the little rain gardens which slow and retain flows. 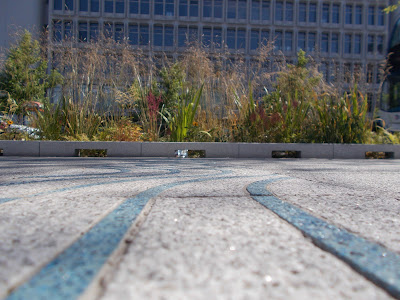 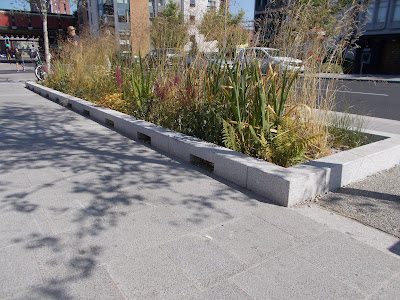 If flows become too great (and it would take a while), water can overflow into the drainage system via a gully set above the surface of the planted area, although in this case, the grating is rather narrow and will be prone to blocking. 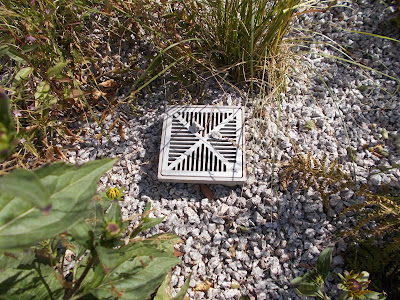 At East Ordsall Lane, another SuDS scheme has been delivered and it's a bit of fun with a serious message. The scheme adds some trees to a pretty boring piece of street, but there is some interpretation to explain how it was built and how it works. 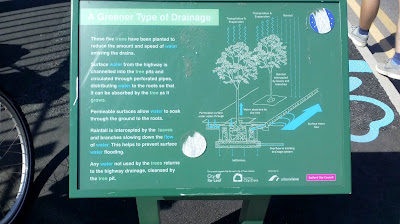 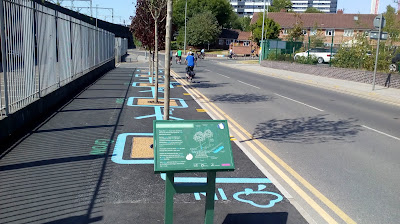 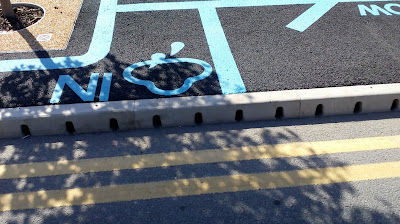 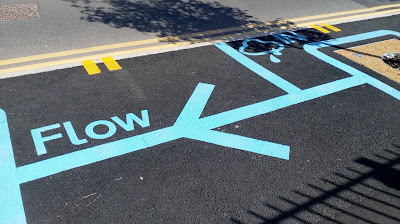 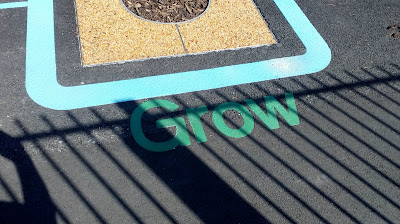 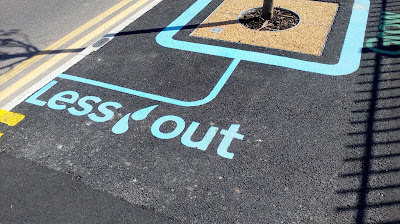 Using drainage kerbs, the run-off from the carriageway and the permeable footway is directed into a large tree pit which slows flows and allows infiltration into the soil. Again, if it gets too much, then there is an overflow to the existing drainage system. I made a quick video which you can see below;


In my next post, I will have a look at some of the cycle routes we saw in the city and the post after that will deal with some of the other interesting things seen along the way.
Posted by The Ranty Highwayman at Monday, July 02, 2018