All Roads Lead To Manchester: The Cycling Embassy of Great Britain's AGM 2018 (Part 2)

In this week's post, I continue my report from the recent Cycling Embassy of Great Britain's AGM in Manchester.

Last week, I looked at some of the ongoing work in Salford and this week's post, I take a look at a route through Manchester itself. In fact, the route is split into two schemes - Oxford Road and Wilmslow Road (aka The Curry Mile). With us were Dave, Andy and Jonathan who gave us insight from a design, funding and campaigning point of view. 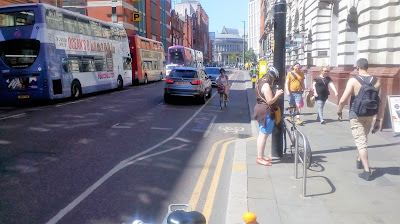 The first part of the route (above) is very light touch with car parking floated into the carriageway and a buffered cycle lane provided between it and the footway. There are no physical measures, but at least when we were there, driver compliance was good. 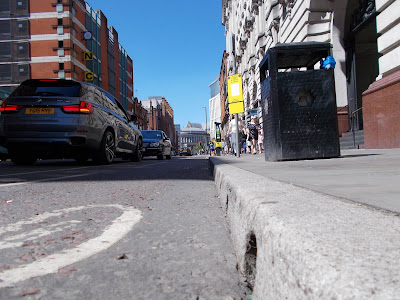 Drainage is provided along much of the route with combined kerb drains, although being half-battered it does mean you cannot use the full width of the route. 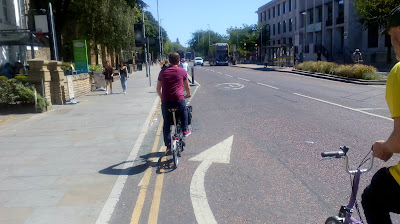 The main drawback with the scheme is that at large junctions there is no protection for people cycling and so turning on and off the route has you mixing with general traffic. 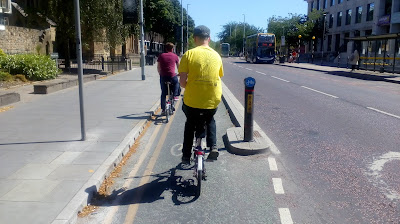 The links (sections between junctions) have kerb protection which is a combination of skinny islands (above) and bus stop bypasses (below). 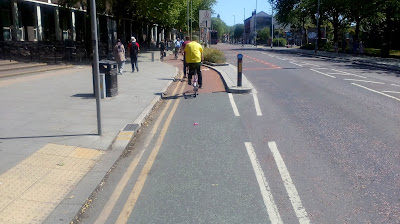 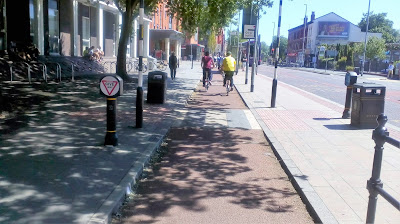 The floating bus stops have a central zebra crossing to assist people who need a formal crossing to move between bus stop and footway. 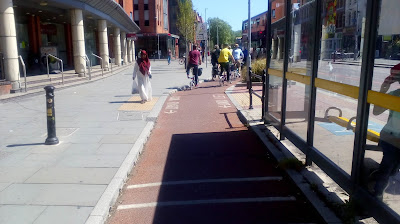 The bus stops also have informal crossing points. One feature is that each approach to a crossing point has rumble strips. We were informed that this was to generate some noise to assist visually impaired people in detecting approaching cycles. I'm not convinced and they just made cycling uncomfortable. 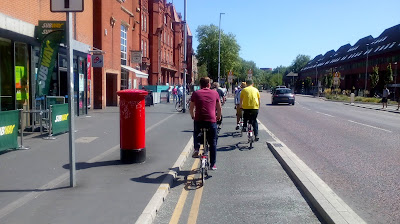 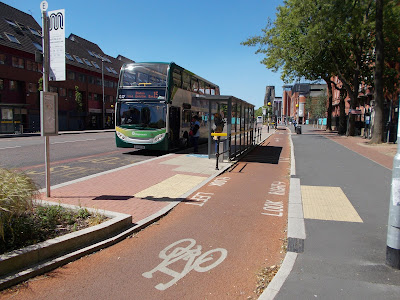 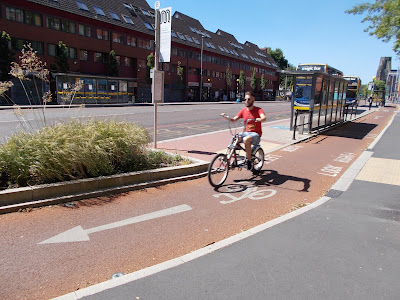 The bus stops have planting at each end and the use of red surfacing for the cycling track definitely looks nicer than black asphalt. 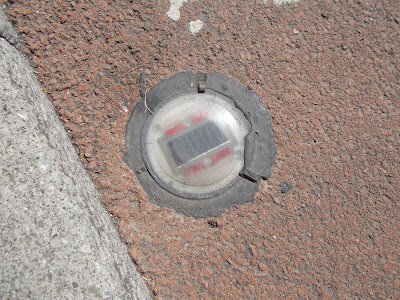 An interesting addition was solar LED lighting in the cycle track surface (above) which helps pick out the edges at night. 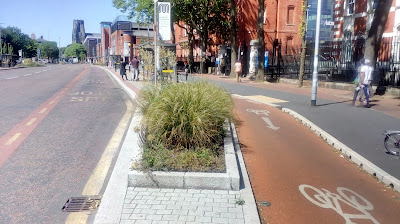 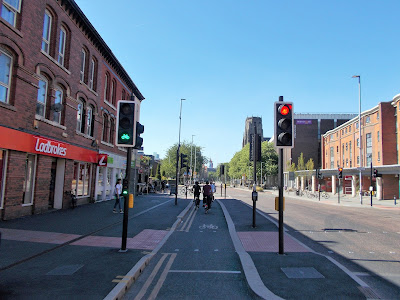 In some places, there are traffic signal bypasses which only stop cycles when someone wants to cross. Given that we are able to provide simple zebra crossings on cycle tracks I think this is perhaps obsolete.

It's a nice section of route, but the lack of help at junctions really does let it down. During the day, access controls mean that for most of Oxford Road, there are only buses (and some access) which makes the route essentially a massive bus lane. The protection is welcome from a cycling point of view and it must be less stress for the bus drivers. Anyway, here is a little video of the route;

Wilmslow Road - The Curry Mile
At the end of Oxford Road, the route changes to Wilmslow Road which is also known as The Curry Mile, a name which speaks for itself, although in reality it's only about half-a-mile long! We cycle around 900m through an area stuffed full of restaurants and small retail stores.

We heard that one of the biggest challenges was the businesses who wanted to keep the heavy on-street parking and this informed a fair bit of the layout. 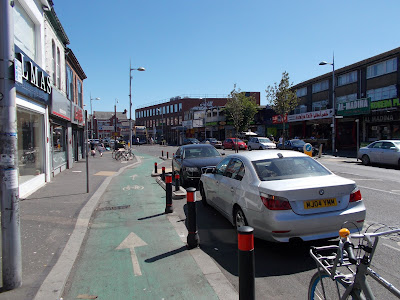 Much of the route has a bollard/ island-protected cycled track which is a bit tight in width and for being in the door zone. It is very similar to the layout on London's CS2. 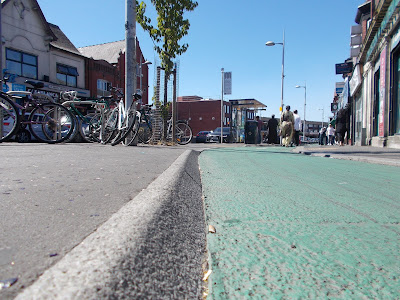 The kerbs are mainly vertical, but in places a 45° kerb has been used with a nice low upstand. 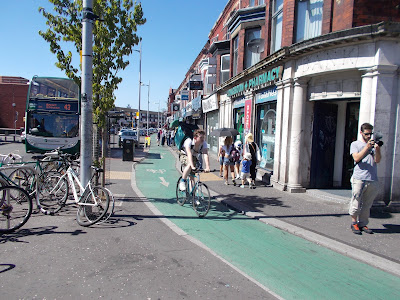 As with Oxford Road, there are floating bus stops (above and below). Being a Saturday afternoon, the place was packed, but conflicts between modes seem to minimal and plenty of people were out on their bikes. 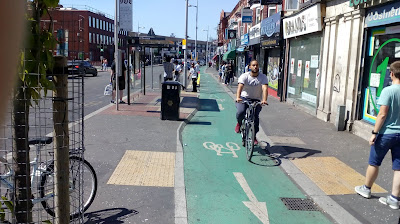 The footways looked narrow in places, but if you look on Google Street View, you'll find that the case before the cycle track was built and when parked cars took up the space. 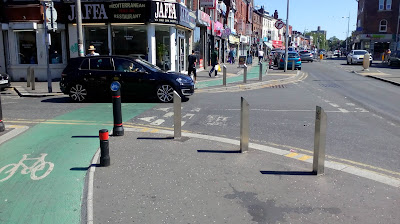 Above and below - a side road treatment giving cycles priority. A continuous cycle track and footway would be better. 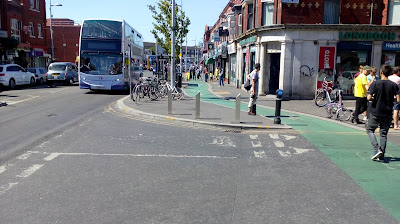 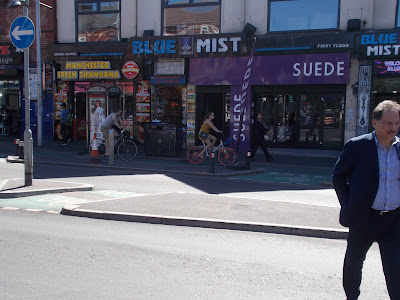 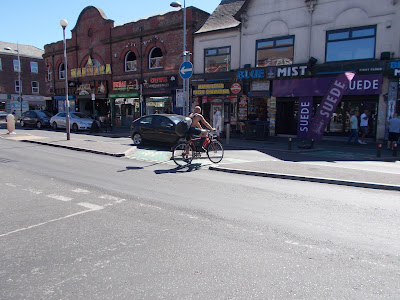 In some places, there are useful little cut throughs for cycling which give access advantages over cars.

We heard that most of the funding was concentrated on this section of the road and as one got further away from the city, the protection got more sparse and sporadic. However, for a UK scheme, it was pretty good - we just need to face down the need for so much parking and go a little more Dutch in the details. Again, here is a video;

In next week's post, I will round up the visit to Greater Manchester with some other interesting things I found while cycling round the city.
Posted by The Ranty Highwayman at Sunday, July 08, 2018