Back in September last year, I reported on the scheme which was transforming Stratford's town centre by removing an old gyratory system. So how is it looking now it's finished?

My previous post covered most of the layout which was Broadway (Southern side) Romford Road to High Street) and The Grove (by Broadway) and so this week I shall be looking at Great Eastern Road which runs opposite Stratford Station, Broadway (northern side) and a couple of side roads. I'll also cover a couple of issues which remaining concerning from the first post and there's a video of the whole scheme at the end. 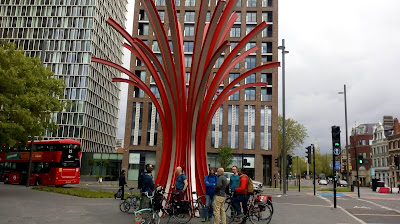 The photo above is of the Railway Tree sculpture which is on the western side of the junction of High Street (behind me), Broadway (south side) over to the right and Great Eastern Road (where the bus is to the left).

In the photo, you can just see the cycle track which heads northeast towards Romford Road. For Great Eastern Road, you cross to the far side and turn left to head towards the station. As with Broadway, Great Eastern Road is two way for motor traffic. Annoyingly, the crossings are push-button rather than detected. 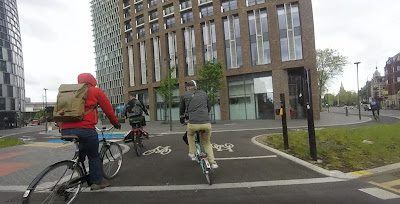 The crossing of the junction is in two halves and the two stage arrangement links to crossings for other directions. The photograph above shows the second crossing (heading northeastbound) with a one-way cycle track peeling off to the right and the two-way cycle track on Great Eastern Road to the left. 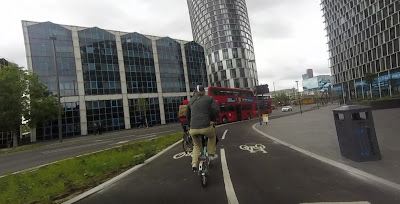 On Great Eastern Road (above), the two-way cycle track skirts the eastern side of the street which perhaps makes some sense because the other side is a major bus to rail interchange and people would be wandering across the cycle track. It does, however, seem to be a missed opportunity to provide a spur link to the station as the access relies on a toucan crossing. 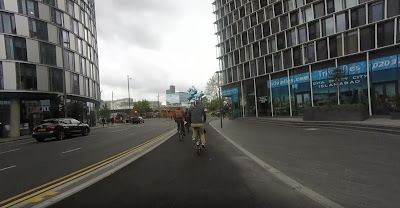 The general design approach has a couple of features which continue to annoy me about London and that is a lack of centre line on two way cycle tracks and the kerbs. The centre line only appears at "conflict points", but in my view, a shorter line with a longer gap is needed elsewhere just to remind people that it is two-way. The kerbs have a low upstand (about 25mm) and have a 45° splay which means if you go too close or try to mount them (to get off the cycle track to stop) you will get a wheel grabbed. 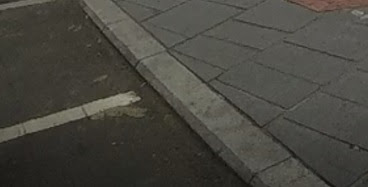 We need to stop using this type of kerb and just copy the Dutch approach which gives a 50mm/60mm upstand and a gentle slope. This allows visually impaired people to detect the kerb, is safer to cycle on, allows people to cycle on the full width and for those using their cycle as a mobility aid, they can easily roll on or off the track. 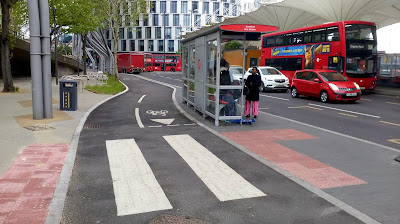 Opposite the station, there is a floating bus stop (above) with a mini-zebra crossing. which seems to work reasonably well. The driver of the bus in the photograph below has stopped perfectly (the front wheels should be in line with the bus stop flag). Anyone getting off the bus and wanting to use the crossing would be walking towards oncoming cyclists nearest to them. I would have put the shelter in the other way round though and had the back of it by the road. 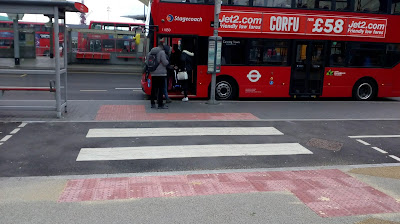 As I mentioned, access to the station for people cycling is via a toucan crossing (below). To use it you have to get off the cycle track and swing round to cross with pedestrians. 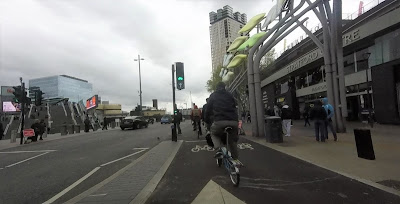 One good thing about this side of Stratford is that the cycle track has been machine laid, so it is nice and smooth. Some of the earlier work has not been machine laid and the ride quality suffers. 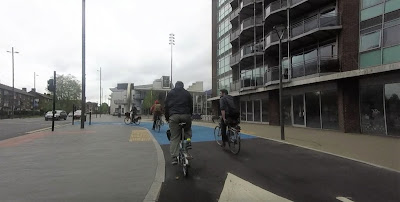 At the junction with Angel Lane, the cycle track crosses Great Eastern Road. Angel Lane is the A112 which becomes High Road Leyton further north and so Stratford town centre is tantalisingly close to connecting with Waltham. As an aside (above) the cycle track humps very gently to pedestrian crossing points and there is annoying blue surfacing at them and other "conflict points". 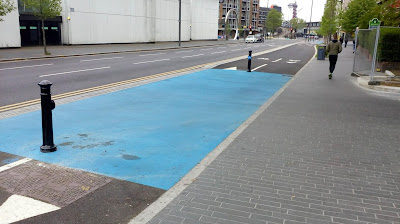 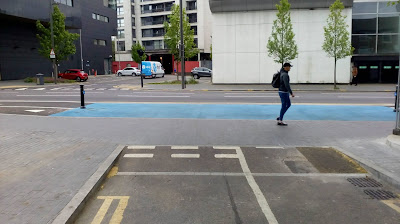 The photographs above show the junction with Oxford Road. The footway and cycle track is continuous which is good, but the opening for motor traffic is on the large side. There are a couple of bollards which kind of pick out the width of the vehicle entrance, but being black means that they are a safety risk for people cycling through.

Just a little further on is the junction with Grove Crescent Road into which the main cycle track disappears (below). 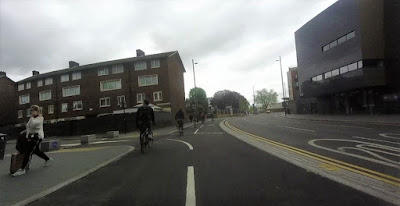 By disappears, I mean it ends at a modal filter which suggests some sort of future route. 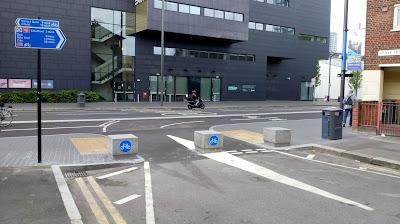 The filter is substantial with lumps of stone as bollards (above) which do present a safety risk to people cycling, despite the decent splitter paintwork!

For those staying on Great Eastern Road, the route carries on until it meets The Grove, although disappointingly, it ends at a shared area linking to toucan crossings which I'd assume is a motor traffic capacity issue. There is a handy transition back into the carriageway of The Grove for people wishing to cycle to Maryland Station (below). 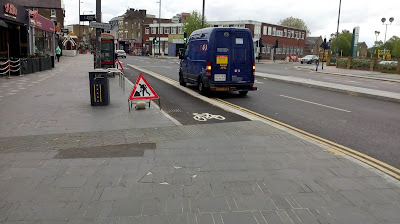 One other feature of the main scheme is the removal of through traffic from the northern side of Broadway. This used to be a major bus interchange and area heavily used to drop off and pick up people by car. That has all gone and now there is a pedestrianised area more fitting the location between the shops and St. John's Church. 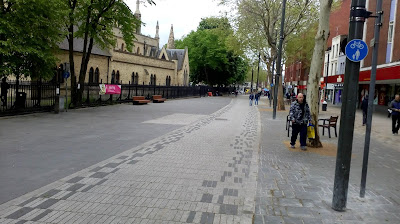 The area does allow cycling and a suggested route is provided by contrasting paving and a level surface. This is not a key through route for people cycling, just a link to the shops and amenities and I think this works well. The area is positively signed as a pedestrian and cycle zone with access allowed for loading and blue badge holders. There is still access to the church car park and on the day of the visit, we did see one driver assuming they had full priority over everyone else - an issue to keep an eye on. Access to and from the other side of The Grove is via a toucan crossing. 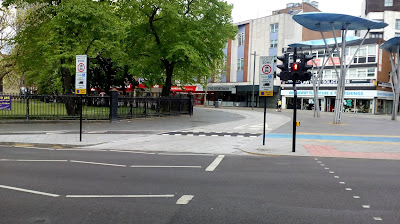 So, there you have it. There are some issues with some of the layouts and details, but the scheme is nonetheless a triumph. I really hope the London Borough of Newham builds on this success with filtering of neighbourhoods and cycle tracks on main roads. Mind you, there is a bid in with Waltham Forest which could be very exciting. I'll leave you with a video.