I'm not going to mince my words, much of the Olympic Park in Stratford is awful and many of the new roads and streets are terrible for walking and cycling. But, I'm going to be positive and concentrate on two gems which should be replicated throughout.

When I say Olympic Park, I actually mean East Village which is the redevelopment of the former athlete's site to create a new community and it is there where a couple of surprises can be found in the otherwise pretty car-dominated streets.

Scarlett Close
This little cul-de-sac is a little unconventional for a British street and has a touch of the Scandinavian about it. By this I mean, the carriageway is extremely narrow with limited car parking being incorporated into the street. With the medium rise apartments and parking garage, it really did remind me of some of the new developments I saw in Malmö last summer. 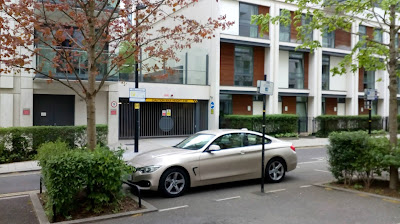 In fact, one could argue that Scarlett Close is a very short dual-carriageway, because the designers have actually created a road that loops around a central reservation which contains the on-street car parking, loading, accessible car parking bays and visitor cycle parking, cleverly introducing trees and planting. 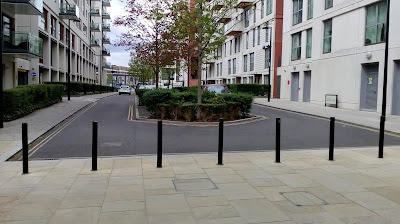 The "closed" end of the street has a little more carriageway space which would allow a refuse vehicle to turn and head back out to the main road. It's not closed to walking and cycling as a line of bollards provide permeability. There are also some pedestrian crossing points through the central island. 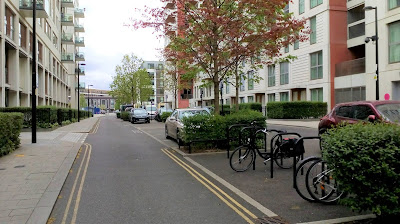 I think it's a really good use of space and it fits in well with the local grid of streets which maximise development space, but where a more permeable walking and cycling grid can be provided. 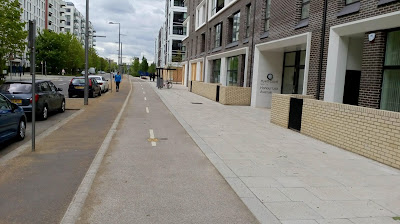 As can be seen in the photographs above and below, we have on-street car parking providing an additional buffer to people cycling and there are nice touches like the covered visitor cycle parking. 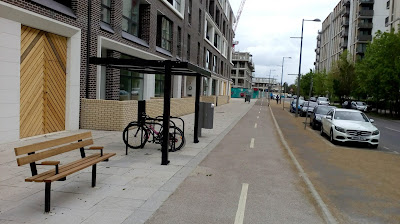 Where we have Scarlett Close on the south side of Honour Lea Avenue, the side roads on the north side are not cul-de-sacs and as a result, they are far less successful. Below is Peleton Avenue as it approaches Honour Lea Avenue and you can see the end (and start) of advisory cycle lanes which belie the street's likely future as being busier with motor traffic than it should be. 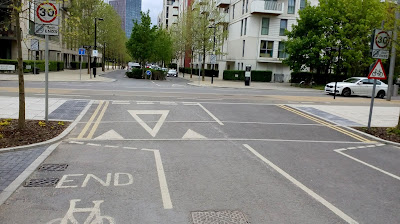 We are given a continuous cycle track across the entry to Peleton Avenue, although the geometry is too generous and signs have popped up to try and manage cyclist/ driver conflicts that the design invites.

A grid system of "main" streets running in one direction which cycle tracks (Honour Lea Avenue) with cross streets being made up of a series of looped cul-de-sacs (Scarlett Close) would actually create a very good neighbourhood. The current layout has some great features, but they don't quite join up and work properly which is a great shame. I'll leave you with a video;