Open The Rotherhithe Tunnel To People

It's a London-centric post this week given the continuing controversy about Thames Crossings in East London.

We have had Sadiq Khan clash with Caroline Russell who asked the Mayor on Thursday why he is continuing with the Silvertown Tunnel which will lock the scheme in for the next Mayor and of course sits uncomfortably with climate change and London's chronic pollution problem;

Then on Friday, it was announced that work on the Canary Wharf to Rotherhithe walking and cycling bridge was being put on hold.

The bridge appears in the Mayor's Transport Strategy (MTS - see where I have circled in purple below), Walking Action Plan, Cycling Action Plan and the Draft London Plan. 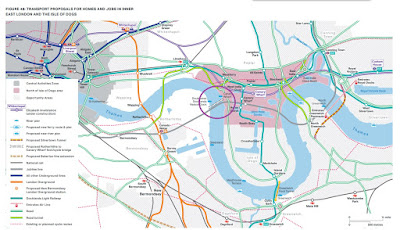 The London Plan and the MTS are the key London development policies and so the bridge is (was) a very important strategic link supporting housing and employment growth both sides of the river.

TfL's Strategic Cycling Analysis recognises the crossing is needed (in terms of latent demand), so there is a compelling case in policy and demand terms for it. Personally, I think it's quite disgraceful that walking and cycling is not being taken as London's first priority, but then you'd have guessed that. Halting work is because of TfL's financial problems making it hard for the organisation to spend funding now developing the scheme, plus the cost of construction, whereas the Silvertown Tunnel is a private finance scheme which will be paid for through tolls later.

Current talk is for a ferry service to be developed, although details are vague and unless a ferry is free, runs 24/7 and is fully accessible to all types of cycle, it's simply not going to cut the same mustard as a fixed link would. The bridge's engineering is complex because of the need to maintain river navigation and its length, so yes, it is a significant investment for London.

Even a ferry service is going to be costly and it will take some years to develop because of the need to plan and build the terminals as well as procuring the ferries. A ferry service will also have significant revenue costs for its life which does make it ripe for charging which sends the wrong message.

So, what else can be done. Well, my immediate reaction is to repurpose the 111 year old Rotherhithe Tunnel which is essentially on a bit of a managed decline with a 20mph speed limit, a 2 tonne weight limit, a 2m height restriction and a 2m width restriction. The venerable tunnel was never designed for the punishing levels of motor traffic thrown at it over the years and so perhaps it could see its dotage as a crossing for people?

TfL is about to start work on Cycleway 4 which will connect Tower Bridge and Greenwich. Interestingly, the route goes through the Rotherhithe Roundabout which is the southern connection for the tunnel; 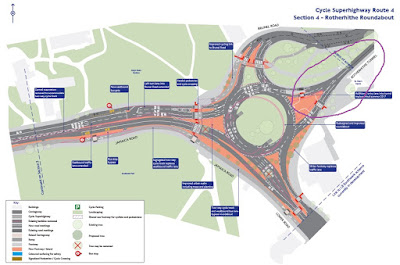 So, I'm thinking that a new cycleway is taken through the Rotherhithe Tunnel because where it pops up on the north side, it is close to Cycleway 3 (I'm using the new terminology) - in fact Cycleway 3 currently passes over the northern approach at St James's Gardens; 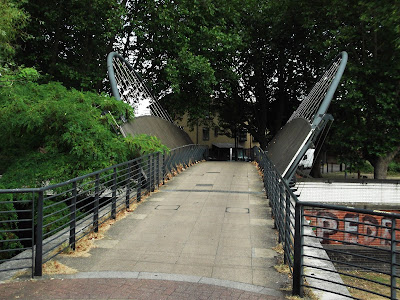 It wouldn't take much civil engineering to connect the Rotherhithe Link to CW3 with CW3 skirting the north of Canary Wharf. CW3 will be intersected by the north-south Hackney to the Isle of Dogs route which is being planned which also intersects with CW2. I think a map might help; 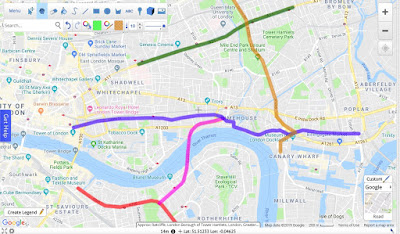 CW2 in green, CW3 in purple, CW4 in red, Hackney to Isle of Dogs in Orange and Rotherhithe Link in pink. There are some other routes in the area and I haven't shown the full lengths of the CW routes either.

So, what about the motor traffic? The DfT traffic data for the Rotherhithe Tunnel was 30,618 vehicles per day in 2018 (down from 37,520 in 2003 when it was busiest). Astonishingly, 142 brave souls a day cycle through because, yes, you are allowed to cycle and walk through the tunnel if you like to be gassed by fumes! Of the daily flow around 6,000 vehicles per day are light goods vehicles.

This is the rub, what to do with 30,000 vehicles? Perhaps a quid pro quo for the Silvertown Tunnel is that Rotherhithe is taken out of use and motor traffic has to use the new capacity to the east. Perhaps we need to accept busier roads in the area, although long term it is probable that there will be traffic evaporation as is usually the case. Perhaps we need to be bold and trial a closure for a few months and deploy some decent traffic monitoring.

Perhaps we could add an electric shuttle bus fleet to create a new public transport link that doesn't exist now, although the buses would have to be small and lightweight such as this type I saw in Deventer in the Netherlands; 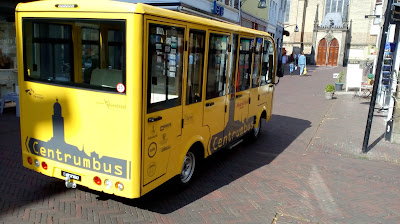 We simply cannot continue as we are in this city and we have to start pushing private car trips out in a more radical way. If we don't have the funding for large infrastructure schemes, then we need to modernise what we have and that means walking and cycling first.
Posted by The Ranty Highwayman at Saturday, June 22, 2019