So this week, I was inspired by Brian Deegan to go and time how long it took to get a green man/ cycle at a 2-stage toucan crossing I use twice a day.

For those who are interested, the location is here. The interesting thing about the crossing is it was one of the things that enabled me to start cycling to work in 2011 because it just used to be a pair of dropped kerbs on each side; 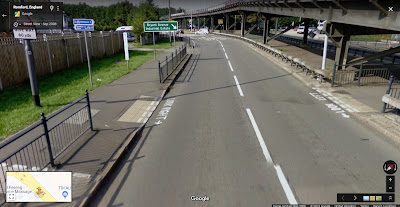 The provision of a signalised crossing along with shared-path widening and the adding of a 2-stage toucan at another junction all worked to make my trip easier. It's all far from perfect, but it makes the journey possible. I digress.

The problem with my regular crossing is that the length of time it takes to get a green leads to a couple of scenarios because of the traffic flow on the road it crosses. On one side of the crossing, it's a bit harder to see the gap in traffic because of the speed of vehicles leaving the adjacent roundabout, but there is never slow moving traffic.

On the other side, it's either absolutely deserted and so there is no need to wait for a green and sometimes it's pretty much stationary which leads to the quandary of crossing between two lines of traffic or push and wait for a green. Driver behaviour is variable with some leaving the crossing clear and some blocking it and with the risk of motorcyclists filtering between the two lanes. I often press the button and wait for a green so I am sure because it is often the case that one lane is moving and the other is not which means (depending where I am crossing from) that I am masked from drivers in the moving lane.

So, am I just a whinger? The journey usually takes a sedate 25 minutes and if it takes a couple of minutes to cross, so what? Am I more important than the drivers I am stopping to cross the road? The thing about traffic signals is that they are not a safety device, they are a traffic (in the widest sense) management tool. They are used to help people cross or join the main traffic flow whether on foot, cycle or in a car. They work if everyone obeys the rules, but the outcome can be catastrophic if someone doesn't (with the risk being higher from drivers of motor vehicles).

There is more detail in the guidance (LTN 2/95), but essentially, where traffic speeds are lower (85th percentile being under 35mph), then the green man/ cycle can be set to come in quickly (although the 20 to 30 seconds advice is still too long, it can and should be quicker). With higher traffic speeds, then the crossing will need speed detection.

If we have the crossing connected to an area traffic control system (such as SCOOT), then waiting times might be even worse because the green man/ cycle is only coming in when it's not going to affect journey reliability time for drivers which is being monitored across an area. Certainly, my regular toucan is connected to SCOOT which is part of the reason it takes ages to get a green.

If someone is going to using a signalised crossing on a busy road, then the stream of drivers is going to be stopped at some point anyway, so wouldn't it make sense for the crossings to actually change quickly? the flip side of them not changing quickly is partly drivers seeing a red signal but nobody crossing (making red light jumping tempting) and partly people crossing because they are fed up with waiting and possibly not finding a safe gap (especially with children and older people having trouble assessing traffic speed).

It's also about respecting those travelling under their own steam and realising that their effort is significant in comparison to those driving. It's about time we started getting our priorities right.
Posted by The Ranty Highwayman at Sunday, June 16, 2019