Back in April 2016, the UK's rules of traffic signs changed with the enactment of the Traffic Signs Regulations & General Directions 2016. As with previous iterations of the legislation, it isn't always easy to follow and so we awaited the updates to the Traffic Signs Manual.

The Traffic Signs Manual (TSM) is a set of chapters which explain how to interpret the Regulations and guidance for such is provided. In short, it's something which is vital if you are designing highway schemes. For years, there was never a Chapter 6 (I assume the Department for Transport had a long game for its release) but at long last and over three-and-a-half years after the new legislation, we now have Chapter 6. 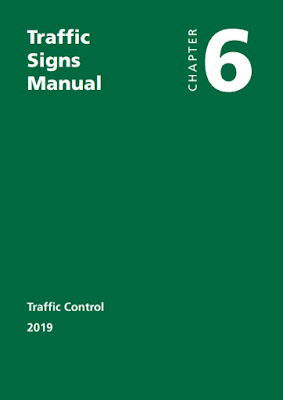 This is an important release because traffic control deals with the operation of traffic signals and zebra crossings. Notwithstanding the fact that traffic control is necessary because of motor traffic, we are still going to have to manage conflicts for the foreseeable future.

After the introduction, the chapter is in four sections;
At 200 pages long, I'm not going to go through the document in detail (and it's going to take while to digest it), so I'll pick out some of the stuff relevant to walking and cycling.

One important point made is that a whole raft of old Traffic Advisory Leaflets and Local Transport Notes have been superseded by Chapter 6 and it does rather lead me to think that the DfT would be far better to roll all of national guidance into a "Traffic Design Manual" which could incorporate everything by theme thus allowing simple updating - and I'm including Manual for Streets in this as well as having a single design guide for cycle traffic, one for traffic management and so on.

The introduction restates (slightly updates for my mind) the hierarchy of provision which is pretty much universally ignored by most highway authorities, but it is good to see it here and it should be used as another stick to take highway authorities to task on, plus it references Manual for Streets which despite needing an update puts place at the heart of design; 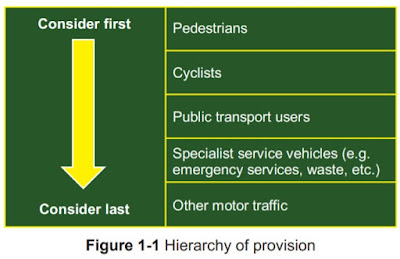 There's also some useful information on consultation and publicity which confirms that there are no legal requirements to consult on a signalised junction. There's also an interesting clarification on crossings in that zebra and puffin crossings are covered by S23 of the Road Traffic Regulation Act 1984, but parallel crossings (zebras for walking and cycling), equestrian and toucan crossings are not.

S23 crossings require consultation with the police, but the other don't; also the requirement to notify the Secretary of State was removed in 2015 (which I had missed). I suspect the non S23 crossings never caught up with the law and really, the need to consult the police is not really needed. For the non S23 crossings, technically they can be installed with no consultation whatsoever, but of course engagement is good practice.

There's also a reference to the Equality Act 2010 which is a shot across the bow of some of the awful junction and crossing installations we see. I might go so far as to argue that signalising a junction without green men crossings is an issue under EA2010, but of course it needs testing in court.

Section I is all about junctions and there is quite a lot of detailed information on how they should be designed. It's aimed at situations of 40mph or below and so for high speed roads, it's suggested that the Design Manual for Roads & Bridges might be more appropriate.

There's discussion on keeping corner radii tight at junctions with the pros and cons depending on the situation, but that tight junctions help slow drivers down and help keep pedestrian crossings on the desire line. We're told that left turn slip lanes should be avoided because they are essentially dangerous for people cycling and make it more awkward to cross the road (my interpretation).

The part on basic principles (p35 onwards) will be of interest as it goes through all of the jargon and so you'll know that phases make stages when you read it (with thanks to Brian Deegan). Further in and there's details on assessment and modelling, information on how signal stages can be arranged and the different ways in which junctions can be controlled as well as how detection works.

Back to walking then. From p62 there is a whole lot of information on pedestrian facilities at signalised junctions and there are some clear points made here;
I personally prefer far-side pedestrian signals, but there's help in understanding near vs far and we're reminded that visually impaired people expect to find push buttons on the right side of a signalised crossing. As for not providing a green man crossing, this is stated as something to be seen as the exception. There's also information on straight through and 2-stage (staggered or unstaggered) crossings.

From p80, we have information on facilities for pedal cycle traffic and even where there is nothing specifically provided, we are encouraged to remember to think about the time people need to cycle through a junction. For those frustrated about "not being seen" by the junction, there is a reminder that loops in the road don't always work. We're next given some information on low level cycle signals, early release, cycle bypasses and that cycle tracks can form part of a junction; as well as how toucan crossings can be incorporated into junctions. 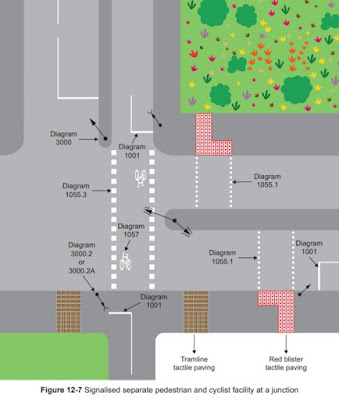 There's some nice diagrams such as the one above which shows a cycle track coming through a junction from a route away from the road to a route running parallel, despite the mistake in the tactile paving which should be corduroy with ridges running across the footway rather than tramlines (spotted by Brian Deegan).

Thanks to Transport for London lobbying and experimenting with layouts, we now have "hold the left", 2-stage right turns and cycle gates in an official document which might encourage their use. I'm less of a fan of cycle gates as the other two, but sometimes we need to use tools to get schemes in for current conditions. 2-stage right turns seem useful on small junctions where general traffic is banned from turning right as part of a wider network arrangement. Yes, advanced stop lines are in Chapter 6 and while they are lawful markings they are bound to be in the book, I'm still not a fan because they entice people into a risky position next to HGVs.

Section II of the document is all about crossings and it's far less complicated than junctions. The old Local Transport Notes 1/95 and 2/95 (the assessment and design of pedestrian crossings) has been absorbed into this section and of course updated because the UK has realised that we also need to provide for cycle traffic!

This section is about crossings separate from junctions and there are three main objectives for a crossing - safety, convenience and accessibility. For my mind, get one wrong and the crossing fails. We are also reminded that people can cross the road where they like which is an important point for some people in the UK to appreciate - we're not the USA with their stupid jaywalking laws. There's also another reminder about the Equality Act 2010.

Then we have some general advice including an interesting layout of an advanced stop line at a standalone signalised crossing which I'm not sure I've seen in the wild yet.

There's some construction-related issues mentioned such as getting the drainage right at crossings, confirmation that guardrailing doesn't really help (p121/p122) and how to place crossings near junctions and roundabouts. There is information on lighting, but rather than talking about supplementary lighting (spotlights essentially), I'd have preferred there to be information on task lighting which is designed to illuminate the vertical like this; 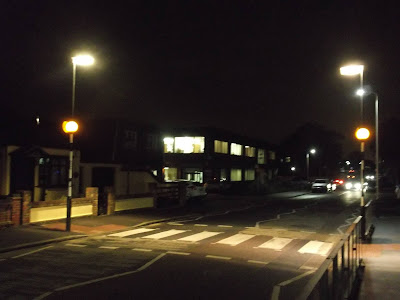 There are specific sections on each crossing type. In the zebra crossing section (p125) there's a good reminder that unusual layouts may be best controlled with signals (e.g. bus lanes), but unfortunately the issue of multilane approaches isn't covered (where a slow lane of traffic masks people crossing from a faster lane).

We've at long last some advice on parallel crossings (where people walk and cycle across), although I disagree with the advice that the waiting area at a parallel crossing should be shared use (p130). While the constraint of having the pedestrian and cycle crossings fixed with a 400mm gap, it is possible to design them to be properly separated.

Within the signal-controlled crossings section, we have a welcome admission that staggered crossings generally offer more benefits for traffic than pedestrians (p133) and that if we do need two stages, a wide island or slight offset is better than a full stagger - much better for accessibility.

Puffin and toucan crossings are mentioned (but nothing interesting), but we do have a description of pedex crossings (p142) which essentially replace pelicans which are being phased out. Pedex crossings essentially use far side red/green man signals for pedestrians with drivers seeing the familiar red, red amber, green, amber, red sequence (no more flashing green man/ amber traffic) - we can also have the countdown units as popularised in London by Transport for London. Finally, we have signals for equestrians.

Part III contains "other signals" - tram systems, wig wags and lane control. Part IV is about installation is probably of less interest to most people. In Appendix A, we have a nice glossary of technical terms and symbols used on engineering drawings.
Posted by The Ranty Highwayman at Sunday, December 08, 2019