A regular staple of local news is when a lorry is driven into a low bridge, despite it being plastered in signs and hi-viz stripes. So, what can be done about the problem?

The majority of bridge strikes (the term used) are on railway bridges simply because there are so many of them and with infrastructure going back decades and over 100 years, there's quite a legacy. We read news stories of bus drivers taking the roof off their vehicle because they were off route for some reason, or the notorious bridge which is forever being hit by HGV drivers.

Railways in the main are designed to be straight and flat because that's an efficient method of working and because so much of UK rail infrastructure predates mass motorisation, many roads have been bridged with headrooms reflective of the alignments of the time and in an era predating mass motorisation and the use of high vehicles. Whilst new railways still need to keep it flat and straight, the scope of the projects tend to ensure there is enough clearance if a road link is being maintained.

In the UK, any headroom under a non-arched bridge which is under 16' 6" or 5.03m should be signed on the structure accordingly using a regulatory traffic sign. Because the height is fixed, there is no requirement to back up the sign with a traffic regulation order and the use of the regulatory sign makes it easier to prosecute a disobedient driver; 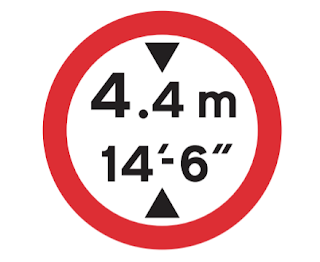 New signs should carry both imperial and metric measurements, although older imperial-only ones can stay until they are replaced. In addition, striped panels can be added to the bridge to help with conspicuity. The image below gives two options - the upper panel is designed to work with the regulatory sign in the centre and the lower panel if this doesn't work because of the bridge construction. The yellow stripes can be retroreflective and fluorescent.

For arched bridges, things are slightly different. Obviously, arched bridges are arched and so the headroom changes over the width of the portal and so while a vehicle might nominally fit in the centre, it might not to one side. Therefore warning signage is used; 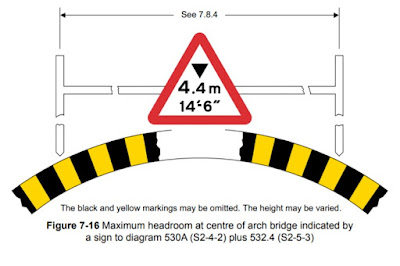 Again we can add stripes and we should also use the white "chord" marking where the clear height is available over a width of not less than 3 metres. The chord marking should be retroreflective to show up at night in headlights. Of course, 3m is going to only allow single lane working of high vehicles and so thought is required as to how this will work.

It's not just bridge that needs signing. It's good practice to provide signage on the approaches and even better practice to sign low bridges well in advance with "escape" routes for the drivers of overheight vehicles. We can use height signs on advanced direction signage (with an alternative route if available); 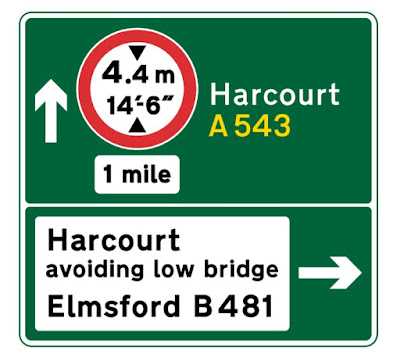 We can use them on map type sign (which show the road layout ahead); 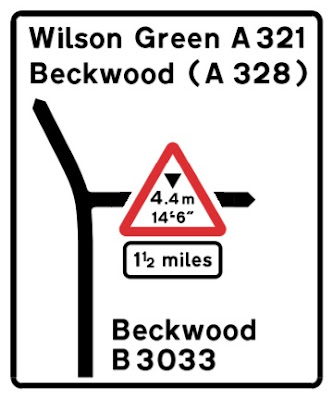 For arched bridges, there's a warning sign for the immediate approaches (a slightly annoying double sign to get imperial and metric); 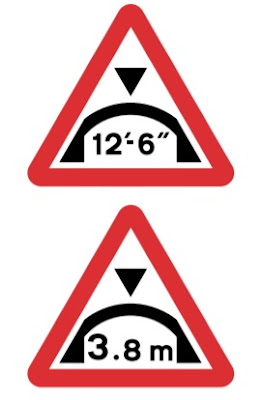 We've also got some other signs which can be put on approaches or at key locations to help drivers avoid a low bridge (and we can add arrows and distance information); 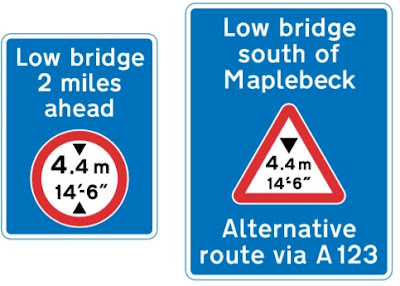 So in terms of signage, there are lots of tools available to us, but of course, the main issue is people need to see them and act of the information. If signage were an answer, then we'd see no bridge strikes.

Modern technology might be able to help as shown in this short video from Cambridge University (this is the bridge);

Despite technology and lots of stripes, bridges still get hit such as this low example in Ely, Cambridgeshire which is the country's most hit bridge; 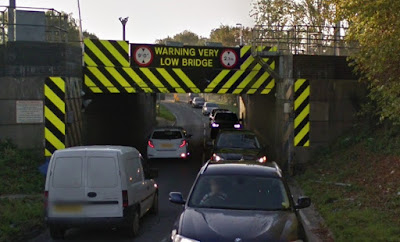 There are more radical engineering solutions which for me gives rise to three main options;
The cheapest solution would be to throw some bollards in and stop motor traffic to remove the risk completely and of course it has the added effect of dealing with through traffic volumes, but it's not a practical solution for some locations which are probably best for dealing with through traffic. A width restriction poses a similar problem, but at the network level it might be appropriate if the route doesn't need routine HGV access.

Lowering the road is an extremely expensive solution because of the likelihood of having to lower/ divert utilities, the potential to have to reinforce the bridge foundations and dealing with highway drainage where the dip is provided.

The other way to deal with it lies with changing how we transport our goods because a switch to smaller vehicles within cities will help reduce the risk of bridge strikes (although it isn't of course a wholly urban issue). There are also lower height lorries available which not only fit under low bridges (obviously depending on the location), they also have direct vision cabs which is safer for people outside of the vehicles; 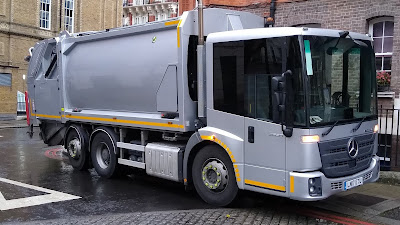 Whatever solutions are appropriate, I can't see the problem of bridge strikes being solved any time soon and in the big scheme of things it's not a huge cost, some £23m a year in repairs according to Network Rail and although they aim to recover the full cost of repairs, it doesn't take into account the losses highway and rail users incur through being delayed and disrupted.
Posted by The Ranty Highwayman at Saturday, November 30, 2019