I think I have got a pretty good handle on the rules, regulations, guidance and practices of how street elements fit together, so even if I don't realise it at first, things gnaw away at the back of my mind.

Zebra crossings are one such element which I notice things wrong with all too often, but how about this example I found near Kings Cross Station in Central London; 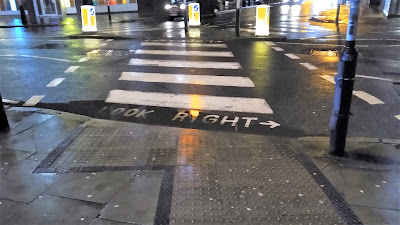 It's actually part of a set of three zebra crossings which all land on a triangular pedestrian refuge island within a wider gyratory - here's a better view from Google with the crossing in the photograph above being the one on the left hand side of the view below; 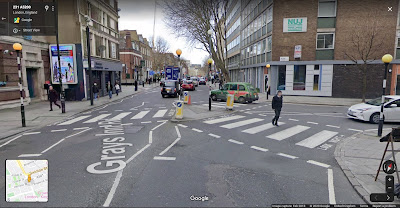 There's quite a lot "wrong" with the layout such as grey tactile paving being used when red is the standard colour for "controlled" crossings (signals and zebras), the tactile paving not properly lining up across the crossings and poor lighting of the crossing points as well as poor local drainage and maintenance issues.

The use of zebras within a layout such as this does at least accommodate pedestrian desire lines and so I've no in principle objection, although being a gyratory there is certainly a high risk of drivers speeding off peak.

However, the thing which gnawed at me was the layout of the stripes. It was only when I used to crossing for the third time in a few weeks that I noticed it. In the UK, zebra crossing stripes are rectangular in shape and are arranged in the direction of travel. The regulations governing the layout require the stripes closest to the kerb to be black (or the carriageway colour if there's enough contrast with the white stripes). 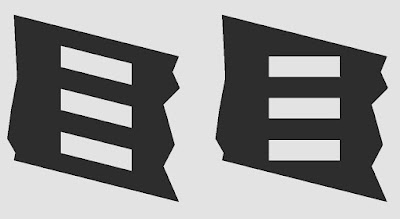 The rules are quite flexible in terms of the layout because every situation might need particular layout requirements, but having the stripes rectangular is a fixed required. Section 16 of Chapter 6 of the Traffic Signs Manual gives full details.

But does this mistake matter in reality? From a legislative point of view, one can argue that the crossing is not lawful and the implication is that the rule of carriageway users having to stop for a pedestrian on the crossing won't apply but how many drivers approaching this installation would think that - judging by the behaviour of some people, the requirement to stop is routinely ignored.

As ever, this kind of thing would need testing in court either as the result of a collision or through a claim or other civil procedure. On balance, I would say that if it looks like a zebra crossing then it is and a court would probably consider a bit of variation on stripe arrangement as de minimis in the same way as a failed Belisha beacon would be. However, rules are put into place for consistency and so this stuff should be right and I would extend that to zebra crossings used on private land and car parks on which there is case law.

Other countries don't necessarily worry about having the stripes aligned in this way, preferring to mark in the way my non-conforming example has been marked. Here's an example from Maastricht in the Netherlands, although stripes are used at signalised crossings too; 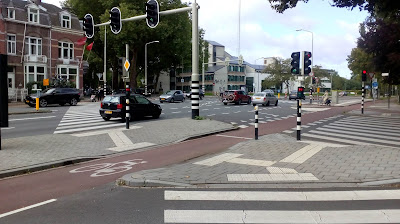 Or how about this Swedish version from Malmö where the stripes are rectangular, but offset as they go across the road! 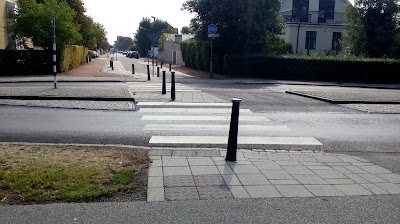 Posted by The Ranty Highwayman at Saturday, January 04, 2020