It's that time of year between Christmas and New Year where I'm having a rest from life and reflecting on the year just gone.

Actually, it has been a tough year for me personally. At the end of June, I said goodbye to working in a authority highways department; I job that I had loved for most of the proceeding 15 years with a step into the unknown world of being a consultant. I do very much miss the people I worked with and I really miss my cycle commute which put me in touch with my local area as well as the changing seasons - although I still have a daily cycle to my local station and back.

The change came as a result of the London council elections in May 2018 where the administration took a distinct shift away from any interest in walking, cycling and safety. Formal decisions started to take months to get made by the political side and staff were often under pressure to change their advice with little apparent support from management.

Towards the end of 2018 I was introduced to my now employer and after a bit of toing and froing it led to me handing in my notice at the start of April this year. My immediate (temporary) boss completely understood my decision, but they also quit and left before my notice ran out! I was left drifting without any real support for those weeks and senior people didn't even make a half-hearted attempt to try to convince me to stay.

Six-months into my new role, I'm no longer stressed and I'm immersed in engineering again which is an absolute joy. I've also got managers who are genuinely interested in my welfare and I'm working with a bunch of people who have made me feel welcome. I realise that all of this stuff is relative and there are many, many people in this country who are far worse off than me. I am thankful for how 2019 turned out, although goodness knows where 2020 will take the UK.

Enough self-pity, on to the roundup.

January
My 2019 started with a statement: cycle tracks should be laid in red asphalt. Some have disagreed, but they know deep down that I am right. 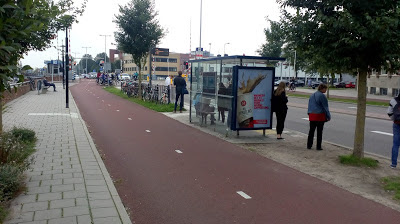 I then took a look at crash-friendly infrastructure on the high speed road network. Next up, a look at some of the costs associated with building cycling schemes.

January ended with the first of two posts on what I called "partially protected turns" which are layouts we can use to protect left turning cycle traffic when we can continue cycle tracks round a corner.

February
The month started with the second post on partially protected turns and following that, I made the mistake of having sympathy for people "caught" in a Chelmsford bus gate - most of you had no sympathy! 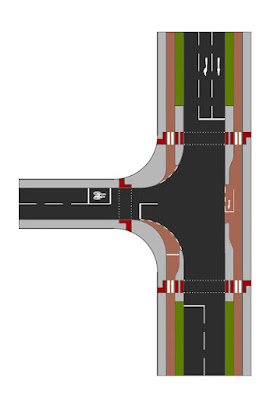 Many people are against the new micro-mobility ideas, but I think we should embrace the little wheels!

My last post of February considered ways of managing freight and loading in our urban places - there is no single answer of course.

March
The start of March was all about a terrifying crossing of a dual carriageway which shows that there are some old habits which die hard in UK road design.

I was asked how people can become highway engineers and for me, the easiest way to explain it was with my story (it's been a year about my story one way or another!)

I then noticed a curious little bit of kerb detailing on a vehicle crossing which was worth highlighting because nothing is new in highways. Then a look at the different ways we can control parking on an area-wide basis. 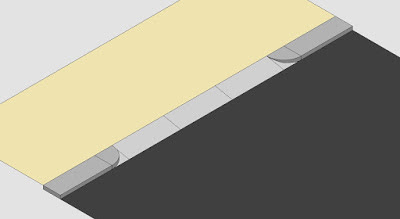 The annual ALARM survey saw a mixed picture on the condition of our road asset.

April
The month started with a visit to the Traffex trade show which I last covered in 2015.

Next I looked forward to a possible footway parking ban in Scotland followed by a short post on making a car park hump in a narrow park access road cycle friendly.

Francis Road in Waltham Forest was the subject of the final post of the month and certainly my favourite street of 2019. 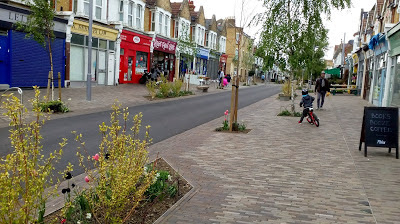 
May
The month started with a look around London's Olympic Park which is mainly awful for cycling, but it has some hidden gems. 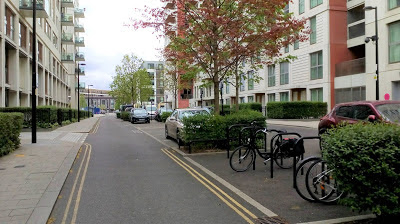 A welcome return to Stratford in East London to look at the completed works to remove the gyratory was up next, followed by a practical look at incorporating loading into cycling schemes was next - it's about what we want to prioritise of course!

Something must be done near schools to make the streets safer, but much of what we do treats the symptoms and not the causes was the theme for the end of the month.

June
I started June with a look at A-road engineering and wondered why we keep the approach as we head into our urban places. 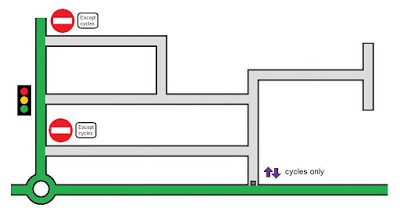 My first visit to Judd Street and Midland Road in Central London was followed by a look at why we make people wanting to cross the road wait so long at traffic signals with another slice of Traffic Signal Pie.

With the news that the Mayor of London was to push ahead with the Silvertown Tunnel while canning the Rotherhithe walking & cycling bridge, I suggested that we should repurpose the venerable Rotherhithe tunnel.

I rounded off the month marking the end of my long stint in the local authority highways office.


July
I started the month pondering the difference between cycling in the rural areas around Harwich (UK) and Hulst (NL) followed by a review of the Dutch CROW Design Manual for Cycle Traffic (which was an eye-wateringly expensive acquisition). 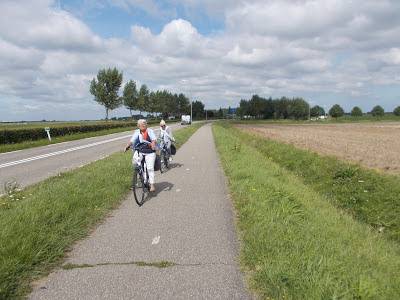 I reported from the Cycling Embassy of Great Britain's 2019 AGM in Cardiff with some cycleways under construction following by a look at the Greener Grangetown project in the city.

August
The month started with my third and final report from the CEOGB's 2019 AGM where I responded to some questions posed by Cardiff's cabinet member.

Then a look at options for crossing big roads, rivers and rail - something that the UK really doesn't get, despite some tantalising attempts in the past.

Different options for going under

The #LondonCycleSafari rode again with a trip along part of Quietway 14, followed by another look at Midland Road by Kings Crossing Station in Central London. I ended the month with a search for a bit of peace.

September
I got the month off to a start with tales from Luxembourg City, one of the places I visited for my summer holiday this year and this was followed up with possibly my favourite post of the year was a look around the Vauban neighbourhood in Freiburg, Southern Journey. I had read about the experiment in low car living and it was wonderful to experience on a cycle. 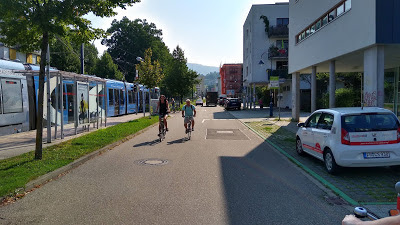 A scene from Vauban

Some thoughts next on the Global Climate Strike and the difficulty of rationalising it with my own work as an engineer. Then my final post from my summer trip, I continued my look around the wonderful Southern German city of Freiburg.


October
The month started with a little post on Lamlash Gardens, a tiny corner of London that I had cycled past many times but never noticed. 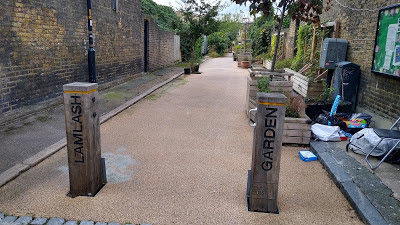 Little did I know that Chapter 6 of the Traffic Signs Manual would be out before the year end, but it didn't stop me decrying the paltry amount being invested by a government obsessed with training.

I took a moment to revel in the joy of seeing more and more cargo cycles in Central London following by a quick look at how the Design Manual for Roads & Bridges was being updated to end the month. 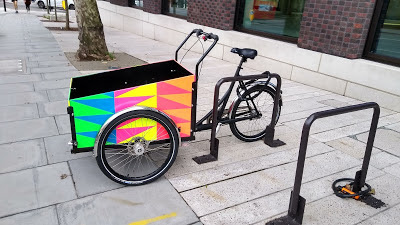 November
The month kicked off with a look at the unusual "dog bone" interchange and how it might be a useful layout to use for incorporating walking and cycling into free-flow trunk road style schemes. This was followed by
a long-overdue slice of my Traffic Signal Pie series looked in depth at pedestrian crossing push buttons and how we might do away with them. 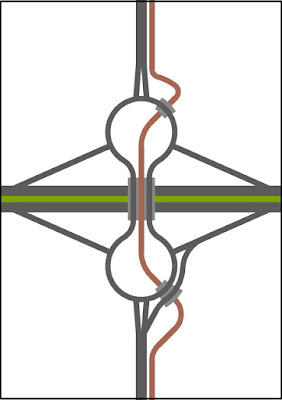 Next was an in-depth look at CD195 - Designing for Cycle Traffic which took an earlier Interim advice Note and made it a full part of the Design Manual for Roads and Bridges, although technically it only really applies to England.

I scorned the nonsense that is the Dutch Reach, a technique for opening car doors to help people to avoid hurting people cycling. I prefer to change the streets. I rounded the month of with a look at how low bridges are signed and how we might mitigate bridge strikes.

December
At long last, the government published Chapter 6 of the Traffic Signs Manual which was the missing bit of guidance following the overhaul of the traffic signs rules in 2016, but then we elected a Johnson which led to a bit of navel gazing at the UK general election.

The year ended on a high note with my post about the UK finally getting a home-grown inritbanden or "entrance kerb" which will make the detailing of continuous footways and cycle tracks so much easier.

Posted by The Ranty Highwayman at Saturday, December 28, 2019