I realise I spend a fair bit of time writing about urban cycling infrastructure and so this week I thought it was time to talk about the rural experience.

I think there are three strands to this; cycling within villages, cycling between villages and towns (or other villages) and what to do with motor traffic.

The UK has developed an extensive network of high speed roads with many bypassing towns and villages, but what we haven't done, is to go back into those towns and villages to return the space to people and nor have we reconnected these places for cycling. So, we end up seeing both the main roads and the towns/ villages full of traffic. We also have parts of the country which haven't been so touched by high speed road building and so even relatively small roads are busy with fast moving motor traffic.

The effect of this, together with poor bus services and a lack of rail, means that lots of people living in rural places have to drive if they want to get anywhere and if they have no access to a car, they are pretty much left high and dry or reliant on other people. Of course, it doesn't have to be this way if we copy the experience from the other side of the North Sea.

The Dutch have grasped cycling provision for rural areas and like urban areas, they look to provide separate cycling and driving networks. Where they come close is along the regional roads which are similar to UK single-carriageway A-roads and which are still used for long-distance traffic.

Not all national roads have cycling infrastructure associated with them of course, it's just that they happen to coincide from time to time such as here on the N290 north of Hulst in South Zeeland; 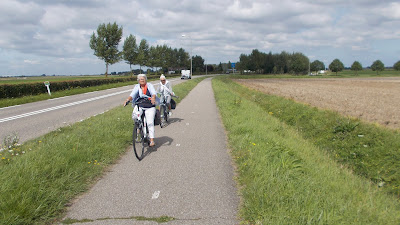 In this particular case, as one heads south to the town of Hulst, the cycle track peels away from the N290 and provides a direct link to the town centre which changes from a cycle track to simply mixing with traffic on quiet streets. The town centre probably has too much motor traffic, but speeds are slow and the town is extensively filtered so it is all managed.

To the north, the cycle track peels away from the N290 as it bypasses the village of Terhole. As the road bypasses Hulst and Terhole, it takes the longer route and so cycling between the destinations is shorter. 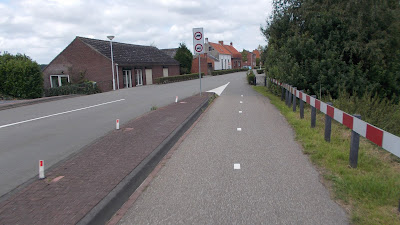 Within the village limits, the cycle track continues for a while (above) until it's safe to cycle on the main village street (below); 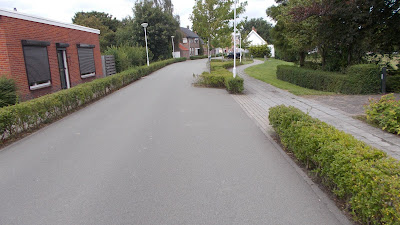 Of course, there is a risk that in the event the N290 is congested, then people might be tempted to cut through the village and so the road is narrow and traffic calmed to try and make it less attractive and to be honest, we are well away from any large towns so congestion isn't an issue.

To the northwest of Terhole, there are other villages which are connected to the N290 by another road. Because the road provides a connection and the design speed is 50mph, there's a separate cycle track.

As with Terhole, the route changes as it enters the village with the cycle track going some distance before people are returned to cycle on the road where the speed limit drops to 30mph such as in Vogelwaarde; 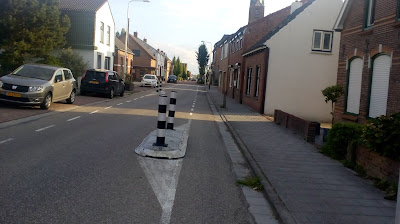 This time, the traffic calming is a little more engineered, but the space needed for cycling is clearly shown. Only at the village core do things change again with the use of imprinted asphalt and a narrower road. 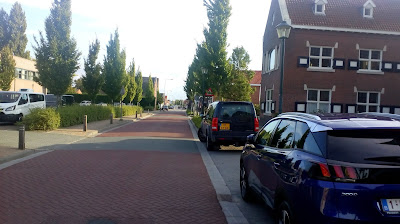 North again and the cycle track reappears before the edge of the village and the whole logical approach continues again and again; 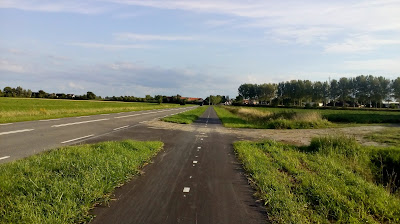 Perhaps the villages don't always feel completely safe because you are mixing with traffic, but in fact there often isn't space to keep cycle tracks going (or there's too much car parking taking up the space in some cases), but the protection is absolutely needed and provided along the fast roads.

It's not all the same of course, there are sometimes just general country lanes without separate cycle tracks and like the UK, people are concerned about speeding drivers; 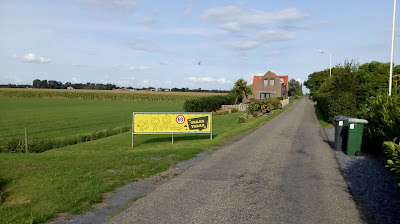 The difference is that these Dutch country lanes are being used to access farms and small groups of houses rather than being a main road to anywhere - that's what the regional roads are for and on the whole, access to this small country lanes is by the people who need to be there (that is not to say safety improvements couldn't be made).

Sometimes there will be some rural modal filtering because of the risk of a country lane being a short cut; 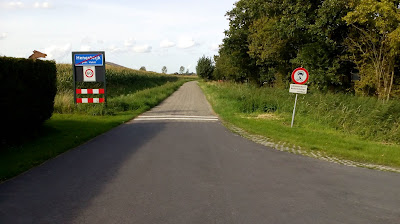 The photograph is just on the edge of Hengstdijk and it's essentially a road that motor traffic is banned from unless it's local access. The road itself is signposted as a route to be used for cycling rather than a parallel road which has no cycling provision and in fact, where cycling isn't permitted as a result because of mixing fast traffic with slower cycling. Even in a rural context, the roads system separates cycling from fast moving traffic which is a pillar of the Dutch approach.

There are different treatments across the Netherlands and different ways of laying things out, but the three principles are;


Trying to make a network operate without those three principles will end up compromising the quality of provision for cycling to the point it fails. In fact, there is an argument that Vogelwaarde is a partial failure because people can drive through to get to other places perhaps too easily.

But this doesn't just apply to the Netherlands, a similar approach can be seen all across northern Europe (with varying degrees of success and deployment). The key is that cycle traffic has been planned for as a useful rural mode of transport and with the emerging popularity of e-cycles, there is the perfect storm of some pretty good infrastructure and the means to travel longer distances without a car.

Using Hulst as an example, somebody living in Hengstdijk (5 miles away as the crow flies) could easily cycle into town within 35 minutes and an e-cycle will knock more time off that. Driving will generally be about 20 minutes but destination parking is a pain that people cycling don't have to worry about.

How do we apply this to the UK? Well, we've got to copy the three principles above and for a large part of the country, this means we are going to have to build cycle tracks in the countryside to connect places together and this means acquiring land rather than trying to squeeze things in all the time which also ends up compromised.

If the highway width is too narrow, then we acquire a strip of land. It might be on the other side of a hedgerow and in some cases, we might need to route our cycle track behind houses which are too close to the road to add a cycle track. We don't seem to have a problem with acquiring land for motorways after all. If you pick a small town and look at the villages which can be accessed within 5 to 10 miles (the further being e-cycle territory) it really shows the potential, but if you look at the roads, it shows you the task we have ahead.

Hulst has a population of about 27,500 people, the same as St Neots in Cambridgeshire. If we look at the places within 5 miles of the town centre we can get as far as Buckden (which I conveniently know quite well). However, to cycle from Buckden to St Neots it's either a direct 25 minutes along the A1 or an indirect 35 minutes through country lanes.

The former is on a narrow path, very close to a dual carriageway and when one reaches St Neots, the route in isn't a nice quiet direct link as with Hulst, it's sharing busy roads with protection having given up long before the town centre.

The latter includes busy roads performing a connector function to other villages and a lovely section of country lane with the national speed limit - roadies cycling it on a sunny Sunday morning might be OK, but it's of no use to someone wanting to do some shopping in St Neots or someone wanting to catch the train. We might be managing the first principle with the A1, but we are roundly failing on the other two.

We have to look at this at the network level and we'll have to build cycle tracks, make people who wish to drive go round the long way (and some might then just cycle) and sometimes, we might need to build some roads but only as part of a coordinated approach which leads to the three principles being met.
Posted by The Ranty Highwayman at Saturday, February 29, 2020