In recent weeks, I've been cycling along the A12, because with the lighter traffic levels, it has been more peaceful and less stressful than mixing with the maniacs on the parallel A118.

I'll write about the A12 another time, but I cycled as far as the Green Man Interchange where I headed north along Whipps Cross Road to reach the redesigned Whipps Cross Junction in the southeast part of the London Borough of Waltham Forest and which almost at the northeast end of Lea Bridge Road.

Although I have visited Waltham Forest in recent years to look at the transformational Mini-Holland schemes, I hadn't been to Whipps Cross for over 20 years. As one of a group of young drivers, we sometimes ended up in the area for a weekend kebab, mainly as somewhere different to go.

The junction itself was an enormous roundabout with a section of dual-carriageway attached to it which I assume was a remnant of a long lost period of road building (this part of London has all sorts of large road layouts which rarely link up. Google Streetview is gradually being updated with the new layout, but here's a view from 2008; 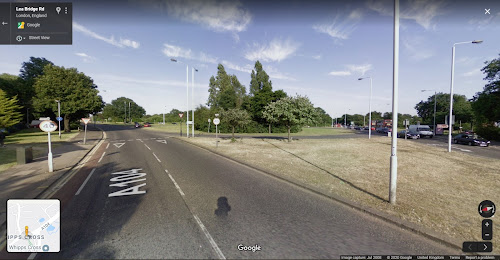 The 1920s roundabout positively encouraged people to drive into it and around it at high speed and as you can see above, the provision for walking and cycling were not exactly world class. Transforming the junction was part of the council's ambition which came to fruition last year. The plan was to change the junction into a signalised T-junction with land released for a bus terminus and land given back to Epping Forest (image from the project web page); 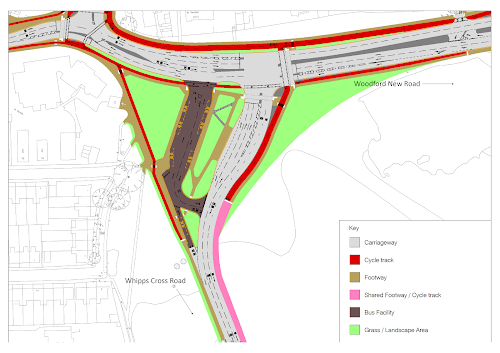 Back to my trip. I cycled north along Whipps Cross Road which skirts Epping Forest (which is vested with the City of London). There is a shared-use path on the eastern side of the road which is pretty annoying for people walking and cycling because of the lack of separation and its width; 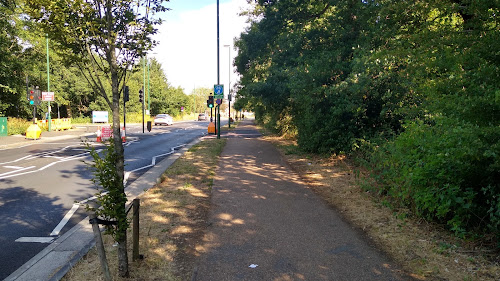 Approaching the transformed junction, the narrow shared-use path splits into a proper footway and cycle track. Yes, there's tactile paving, but only because of the transition. The footway is separated from the cycle track by a kerb with an upstand which is my preferred approach; 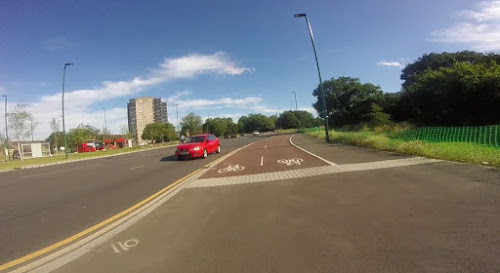 This section is 2-way simply because it connects to the shared-use path which is also 2-way. A little further north is the junction with Lea Bridge Road. The pedestrian crossings are "floating" with mini-zebra crossings over the cycle track to reach the signalised crossings over the roads. The photograph below is the zebra crossing which feeds the signalised crossing of the northern end of Lea Bridge Road; 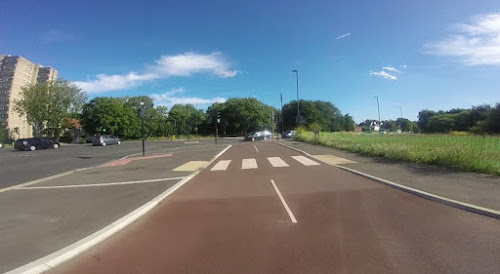 The pedestrian and cycle crossings within the scheme are single stage; in my view, the tactile paving associated with the mini-zebra crossings should be red because buff is reserved for "uncontrolled" crossings. That to one side, it is clear to people cycling that they should be letting people cross.

At the junction itself there is an issue. The crossing movement is ahead only which means one cannot turn left to head west along Lea Bridge Road; 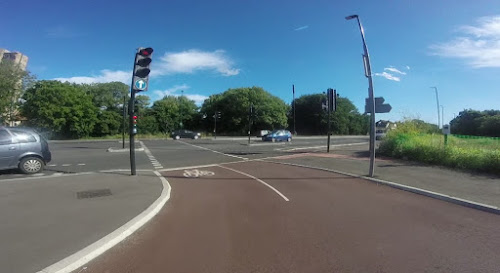 It was only in writing this blog post up that I realised that to make this left turn, one had to cross, turn left, cross back and turn right which really isn't intuitive, although you'll see me cycle most of this without quite understanding in the film linked below. I don't know, but I'm assuming that this is a compromise to motor traffic capacity, although without the signals staging diagram I can't be sure - I suspect that there will be non-compliance here because it's not a convenient layout.

The photograph below is at the junction of Lea Bridge Road with Wood Street looking west. This is where people cross back to head west using the crossing in the foreground. The right turn in the background takes one into Wood Street so at least at the network level, it hangs together. 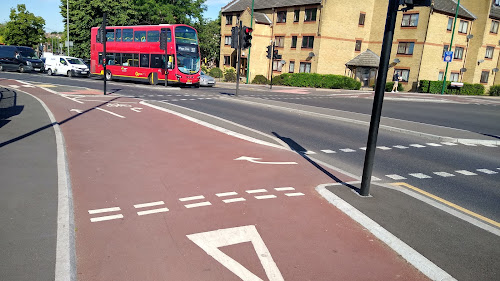 Coming to the junction from the Woodford New Road end of the scheme, there is also a one-way cycle track heading east. This is linked to further provision coming from the east which is still being constructed. The ahead movement takes one west. In the photograph below, Whipps Cross Road is to the left. This operates as a "hold the left turn" so ahead (westbound) cycle traffic and motor traffic run together. The problem here of course is there's no way for people cycling to turn left.

I think this needs looking at again because turning left into the cycle track on Whipps Cross Road is not in conflict with anyone else and with a bit of playing around with kerb lines the movement can be accommodated. 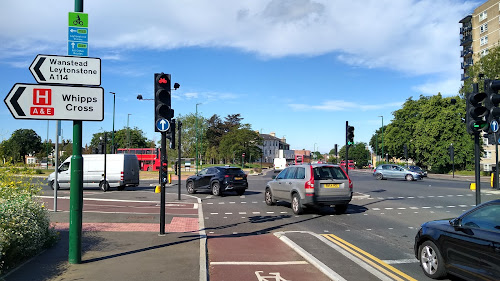 The photograph below is from the other side of the junction. To head west on Lea Bridge Road, one will come from the right of the photograph and head towards the bus before crossing at the next junction before turning right (at the Wood Street junction) which is partly why there's a two-way cycle track here. Again we have the buff tactile paving and mini-zebra crossing. 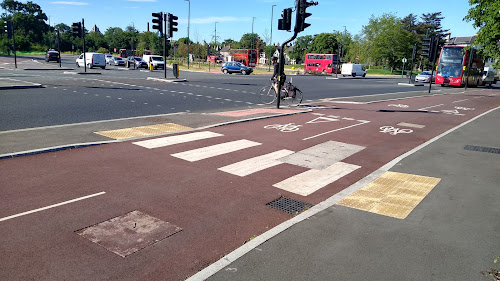 The pedestrian crossing is offset between the cycle track and the signalised crossing of the main road. I'm pretty certain that this will be at the insistence of Transport for London's traffic signal engineers who (like many across the UK) simply hate the idea of having cycle track crossings in line with those of the main road. I have yet to be shown where this is a legal requirement and so it makes crossing more difficult. In this location, the "floating" crossing island could have been much wider in my view.

One other issue which I need to raise is where the cycle track crosses the entrance/ exit to the bus terminus. Although it is only bus traffic and sporadic at that, it's a really long access to cross and the technically unlawful use of elephant feet markings don't solve the feeling of exposure. 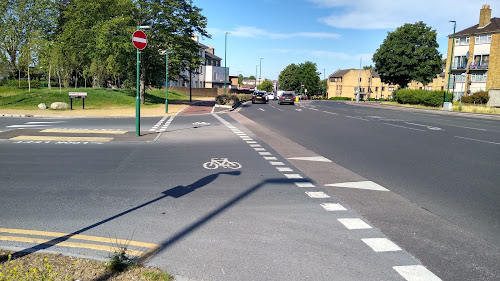 The cycle tracks are surfaced in a very smoothly laid red asphalt (AC6 for the geeks). The standard of work is some of the best I have ridden on in the UK and the contractor is to be commended. 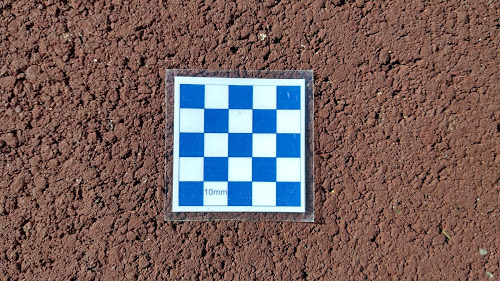 The kerbs between the footway and cycle track do unfortunately annoy me. While they should be high enough to be detectable by visually impaired people and low enough to avoid catching cycle pedals, the 45° chamfer will still keep people away fro the edge through fear of catch their wheel and those who cannot dismount and lift their cycles won't be able to leave the cycle track.

Perhaps this is less of an issue in much of the junction where the cycle tracks are wide (4 metres for the 2-way sections), but it's an issue where there are shops and other places people may wish to visit, but they cannot easily get off the cycle track. 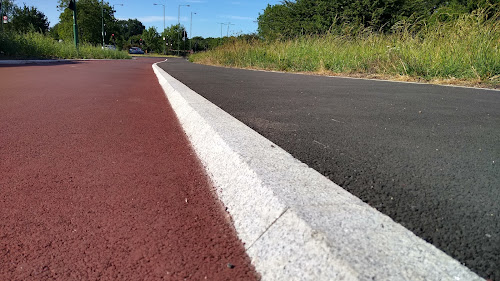 OK, so I have been a bit critical and it's very easy for me to be so as a cycle-saddle pundit. I'm not party to the design process, the discussions, the awkward issues and the whole range of things which come together on site. Please make no mistake, the scheme is a triumph and it is at the cutting edge of UK cycling infrastructure design and it's a joy to use.

On my visit, I caught a couple who where on London Hire Cycles, a very long way from the nearest docking station at the Olympic park riding in perfect, comfortable safety. 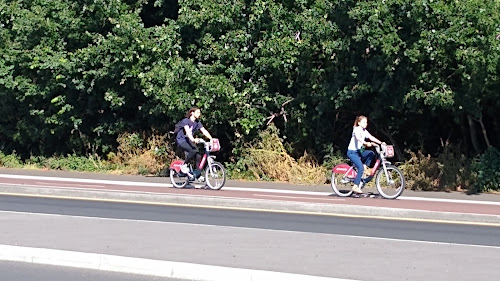 As I queued at the junction to head back towards the A12, this chap wasn't dressed up in the lycra of some of the sports cyclists I had seen in the area that morning (off out into the countryside no doubt). 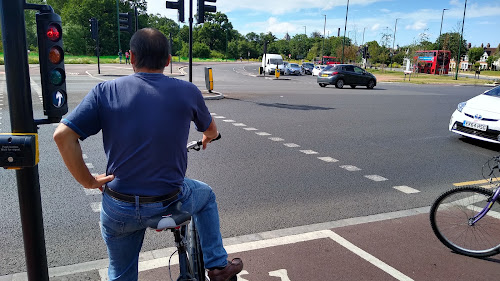 There was also who I assume were father and son just out cycling. This would have been unheard of before the transformation. 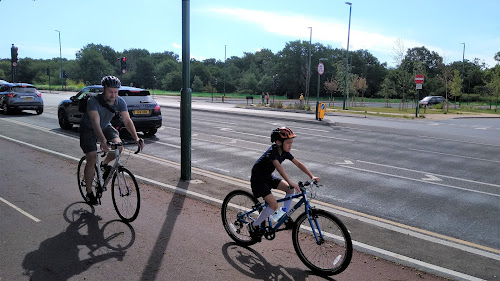 To the north of the junction, work continues along the last section of Lea Bridge Road to where it becomes Woodford New Road which will provide a link to Redbridge. Work is currently up to Oakhurst Gardens, but will continue the two-way cycle track up to Waterworks Corner (the junction with the A1406 North Circular Road). 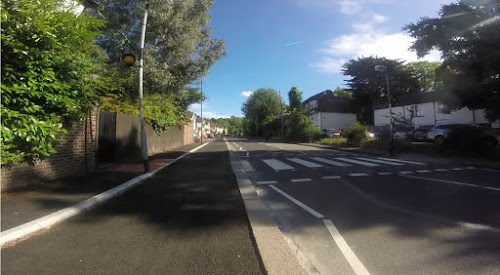 Anyway, I shall leave you this week with a film of the junction and immediate area.

Posted by The Ranty Highwayman at Saturday, June 27, 2020