Pedestrian refuges can be a bit Marmite to some people, but they remain a useful tool in our streets toolbox and if used appropriately they can be useful from a sustainable safety point of view, as well as improving subjective safety for people on foot.

In legislative terms, refuges are permitted as "safety provisions" and are authorised under S68(1) of the Highways Act 1980;
A highway authority may, in relation to a highway maintainable at the public expense by them which consists of or comprises a made-up carriageway, construct and maintain works in that carriageway for providing places of refuge for the protection of pedestrians crossing the carriageway.
In the practical sense, the design and materials to be used in constructing refuges are not universally set out, but if we are to ensure that they are fully accessible, then as a minimum, we should be seeing dropped kerbs being provided on the footways either side of them as well as the refuges themselves (either dropped kerbs, or more commonly the pedestrian area being flush with the carriageway) along with the correct style of tactile paving being used.
The layout most often seen around the UK uses two islands separated by a gap into which tactile paving is laid (although not always as you'll see below) and where people stand while waiting to negotiate the next crossing stage. The photograph below shows the typical arrangement although in this case it's a shared-use path crossing. 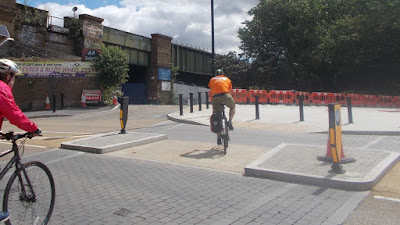 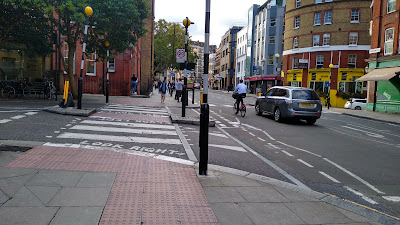 Where the refuge is being used within a signalised situation with a green man (crossing or junction), then tactile paving should not be used on the refuge as the crossing will be single stage under signals as shown on the photograph below. The push buttons you can see are simply there for anyone who wants to cross in a traffic gap or gets caught and needs help for the second half. Crossing on the green man should be long enough to cross in one stage. 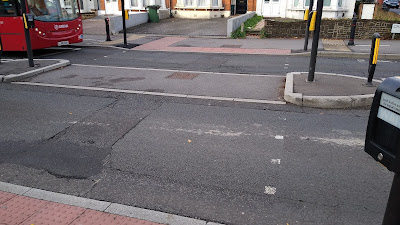 Of course, if we really want to be pedantic, we could say that the example above is not a pedestrian refuge, it is a space protected by two traffic islands which are primarily there to protect the traffic signals. Of course, it would be ignoble of me to be quite that pedantic.
If there is no green man within a signalised arrangement (which will be a junction), then tactile paving is required (but not red) because this is treated as an uncontrolled crossing point. The photograph below shows this situation, although the designer chose light grey tactile paving rather than standard buff. 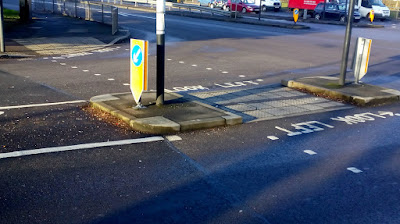 One other feature about the use of tactile paving which is worth mentioning is that on wide refuges, we don't place it over the whole crossing area. For a refuge greater than 2m in depth (from the point of view of a person crossing), we actually provide two strips 800mm deep. The guidance doesn't explain why, but maybe it's about limiting the amount of blister paving which can be uncomfortable for some people to walk on or to explain to visually impaired people that the refuge is a larger size. 800mm is used so people don't step over the line of tactiles. 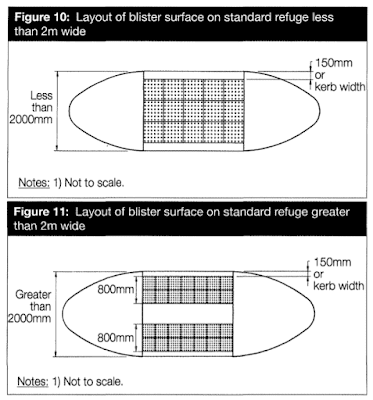 Of course, the next question is when is a refuge large enough to no longer be a refuge? Well, there's no firm figure, but I would say once we get to about 4m, then we can probably start talking and pedestrian islands such as this one over Hampstead Road at its junction with Euston Road in Central London which is about 5.7m wide; 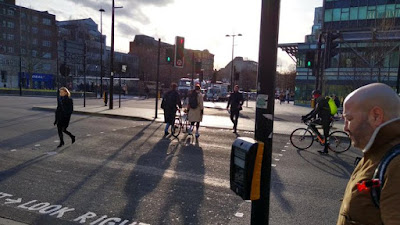 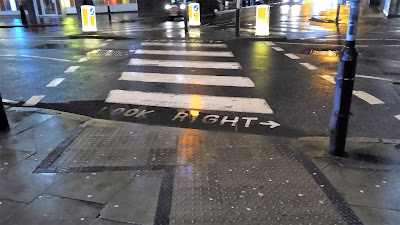 Actually, it probably doesn't matter too much. The sustainable safety point is that refuges help people cross a road in more than one part and if used appropriately, this means only crossing one traffic direction and one traffic lane at a time so someone is not having to think too much about traffic from two directions.
The implication of this is that pedestrian refuges should be at least 2m deep (from the point of view of someone crossing) so that people with buggies or pushing a wheelchair can fully fit. Of course, many  pedestrian refuges are less than 2m deep and even down to 1.2m (the operational minimum to add keep left arrow bollards which are not too close to a kerb); but this won't be enough in many cases in terms of providing enough protection. 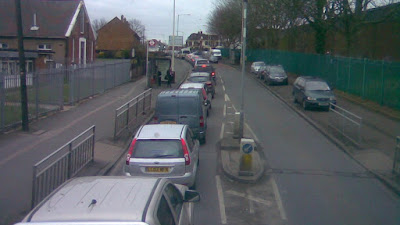 This will be a judgement call for the designer, but perhaps we should be moving to a zebra crossing as a solution (but cost often plays a part in the consideration).
The photograph above shows an example of a shallow crossing depth. Maybe this would not feel safe without slow moving traffic, but if you were crossing from right to left here on a straight through zebra crossing rather than a pedestrian refuge like this, would you be confident that drivers coming the other way would see you and stop? Context is everything and as a rule of thumb, I would be wary of providing pedestrian refuges where traffic speeds are over 35mph and where there are heavy traffic flows (OK, heavy is subjective).
It's because of the risk of being "masked" that I would be very wary about using pedestrian refuges where people have to cross more than one lane to get to them. If one of the lanes has slow moving or stationary traffic, then someone being invited to cross by a driver may not be able to see or be seen by other drivers in a moving lane. The photograph below has a single lane to cross in the first half, but the second half is a free for all for drivers and really hard to cross; 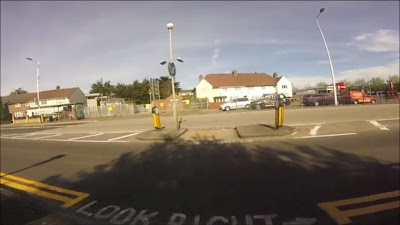 The photograph below shows just how awful it is. Imaging trying to cross here with a child in a buggy with some slow moving traffic, but others cutting through on the far side (left hand side on the image below); 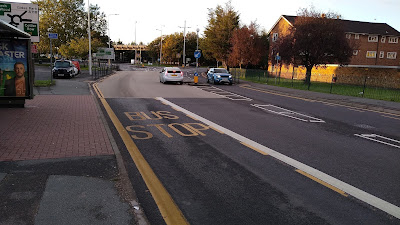 The example below has two lanes to cross on each side of the refuge. You can see how slow moving traffic in one lane might mask someone. On the right hand side of the photograph, two lanes need to be crossed with traffic leaving a roundabout at speed. 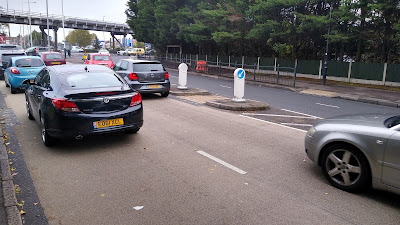 In terms of materials, most pedestrian refuges will be constructed from standard concrete kerbs and concrete tactile paving. I prefer to use concrete infill rather than asphalt because the lighter colour of the concrete helps make the pedestrian refuge a little more conspicuous to drivers (light coloured block paving does the same job).
I would also use keep left arrow bollards. There are regulations on when the keep left arrow sign should be lit, but the use of internally illuminated bollards can help spill a little light onto the feature. Keep left arrows are not a legal requirement, but in most cases, they are a sensible addition. 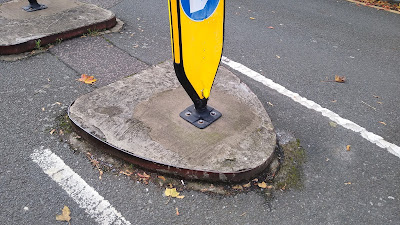 Some older refuges are formed with steel "D rings" (above) which are bolted to the carriageway and filled with concrete or asphalt. Because pedestrian refuges are in the middle of the road and some drivers cannot manage to pass them without hitting them, the metal ends up getting bent which means sharp edges for tyres (below). In my experience, you could guarantee it would be a bus driver who managed to find a sharp edge with their tyre. Of course, some layouts are very tight and the odd scrape is inevitable. 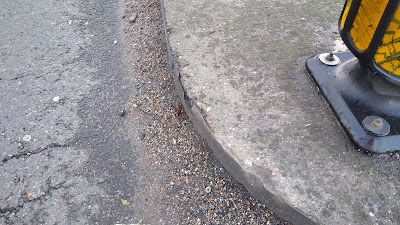 There are manufacturers who produce bolt-down rubber island units and together with stick down tactile paving, the refuges can be installed fairly quickly. Of course, you'll still need to installed dropped kerbs and tactile paving on each footway.
One other issue to mention is that of mixing people cycling with pedestrian refuges. As you can see in this clip, there isn't really enough space for drivers to overtake cyclists passing this pedestrian refuge and so people cycling just end up being cut up.
Even if the pedestrian refuge were to be wider (and the lane narrower) to make the lack of space absolutely clear, some drivers will still try to cut in. The issue in general here is that if a road is busy enough to warrant a refuge to help people cross, then people cycling should probably be protected physically.
LTN 1/20 Cycle Infrastructure Design suggests that lane widths of between 3.1m and 3.9m should be avoided, but I would want to see more (especially where there are lots of HGVs and buses) to give people cycling plenty of space. Of course this then means that people on foot have a longer crossing distance.
The other issue to watch out for is where cycle traffic is going to be filtering in a lane along the inside of slow moving traffic. Like the masking issue mentioned above, there is a risk of someone invited to cross by a driver masking an oncoming cyclist. The person cycling has a responsibility to watch for people walking, but perhaps a controlled crossing might be of help in this situation;
Finally, if a refuge is to be provided for people cycling to cross a road, then it should be at least 3m in depth (from the point of view of the rider) so that all kinds of cycle can cross. If the refuge is for cycles only or shared, then give way markings should be provided unless it's a parallel zebra crossing (below) or a signalised arrangement; 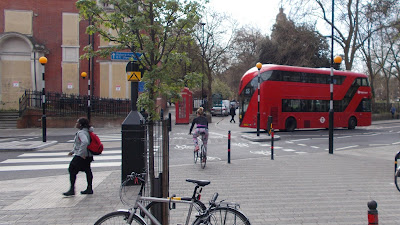 I'll leave you this week with a refuge in Malmö, Sweden. It's actually where a walking and cycling route crosses a distributor road, so don't let the road cyclist fool you. 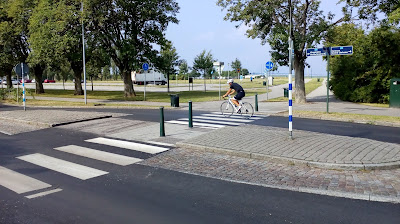 It's a great design as the road layout forces people driving to slow down and makes crossing in two parts really easy. I might even go as far as saying, it's a baron among refuges. 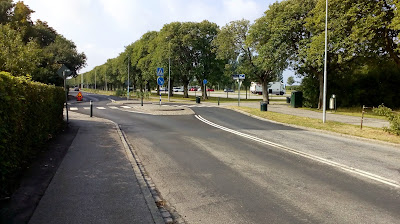 Posted by The Ranty Highwayman at Saturday, October 10, 2020