It's simply wonderful to see Low Traffic Neighbourhoods spreading across the UK, although at least in my part of the world, I wish I did't have to cycle quite to far to find one. Hot on the heels of the LTNs in Redbridge starting to be rolled out, another interesting scheme is running.

In the first cross-authority scheme I am aware of (please let me know if I am wrong here), the London Boroughs of Newham and Waltham Forest have joined forces to create two new LTNs straddling their boundary. The Maryland and Odessa LTNs remove the ability for drivers to cut through a large residential areas which contains some nice suprises.
As with my trip through Redbridge's schemes, these new LTNs actually make Quiteway 6 nice to use and on this side of the A406 North Circular Road, it significantly improves its utility for both short local trips and longer distances for people wanting to head further east and west. Of course, being partly in Waltham Forest, there is now more opportunity for access by cycle to the north and vice versa. One issue which still remains is the Q6 route is not signed, an issue I noted back in June.
This isn't a Covid-related project, it has been in the planning for well over a year, but the pandemic has seen the prioritisation of Transport for London's Street Space programme which has funded this project in the immediate term with the project going live at the end of the Summer using the experimental process.
The image below is from the consultation website set up for the project which creates the Marylane LTN in the west (to the north of Maryland Crossrail station) and a larger area, Odessa, in the east. 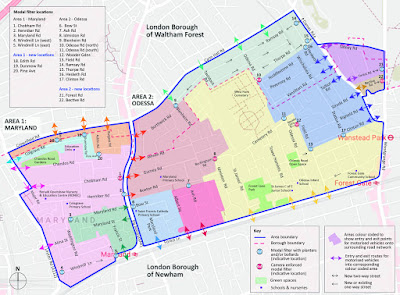 To the south, both LTNs are bounded by Forest Lane (which connects the A114 Woodgrange Road (which connects to the A12 at the Green Man roundabout much further north) and the A118 Romford Road (via Grove Road). To the north, we have Cann Hall Road and Crownfield Road (which perform a distributor function).
To the east, there is the A114 Woodgrange Road itself (with a section of the A114 Woodford road) and to the west, we have the A112 Leyton Road. Between the two areas, Leytonstone Road runs north to south. The eastern boundary is a little less defined as there is already a little bit of filtering there, with Dames Road running north-south through the edge (it's a bus route).
The boundary between the two boroughs runs along the very northern edge of the Maryland LTN and, maybe, through the northern third of Odessa. The cooperation was vital to create a logical scheme and for the user, they frankly don't really care who is in charge of the streets as the walk and roll through them. The other point of note is that in many cases, the filters are within the LTNs rather than on the edge which allows drivers to enter and exit without having to perform three point turns (the reversing part of which is a safety risk) - this isn't the case everywhere because of local contexts.
Wonderfully, Waltham Forest is planning a third and fourth LTN in the area to the north of these two which nicely fill in a gap which wasn't covered by the borough's original Mini-Holland project - the South Leytonstone project.
My entrance to the area came from the east via Capel Road (part of Q6) which has recently had a new cycle track opened at it western end which really makes a welcome change from the eastern end of the street where you have to mix with traffic and parked vehicles and it was nice to see families out and about using it (below); 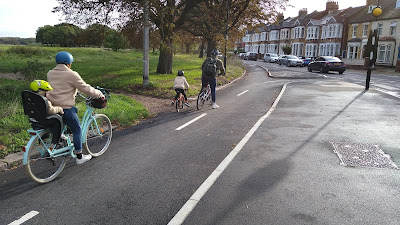 Crossing Woodford Road using the parallel zebra crossing into Brownlow Road isn't great because the interface between the Capel Road cycle track and the approach to the crossing is via a kerb which really isn't flush (below_; I also found that both on my outbound and homeward legs of my trip, drivers really didn't want to stop. You've also got to swing across the junction of Browlow Road with Woodford Road which is an awkward layout. 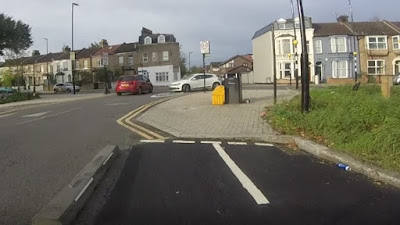 Beyond the filter between Brownlow Road and Anna Neagle Close, there's Dames Road and after crossing it into Bignold Road, I was in one of the traffic cells of the Odessa LTN. The first filter I saw was on Station Road, just south of the junction with Clinton Road (below); 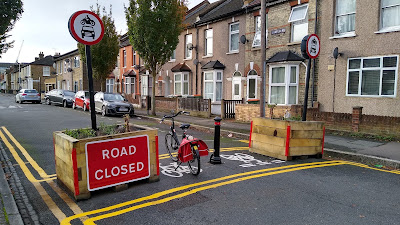 It's the now familiar timber planter and in this case the central bollard is for emergency access. The "no motor vehicles" traffic signs are cleverly fixed into the planters which means no additional footway clutter. The next one I saw was on Field Road, just north of Dean Street (below) which was an all planter affair; 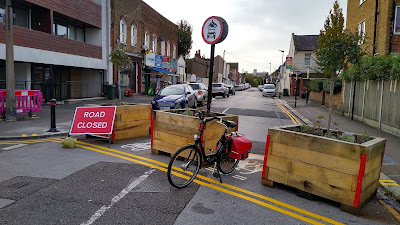 This is a great location because it has made the area around a cluster of shops lovely and quiet - this is ripe for some public realm improvements assuming the scheme stays. Dean Street is a narrow residential street with one-way for motor traffic and two-way for cycling which keeps it all nice and permeable for active travel. Next was Odessa Road, north of Cemetary Road with planters and emergency access bollards (below); 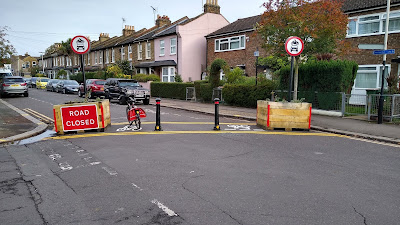 A little further north on Odessa Road, I found another filter which is on the Waltham Forest side, just north of the junction with Huddlestone Road. This time, the filter was a couple of planters with the restriction enforced by camera (below). I assume this is for emergency access because just beyond is a different traffic cell and an series of streets subject existing to one-way control. 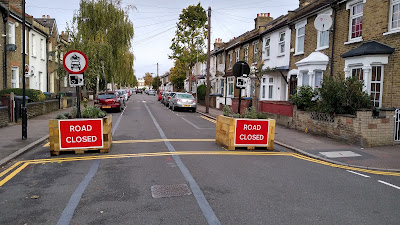 This cell at the northern limit of the scheme is really quite annoying because I wanted to head west, but the next two side streets before Cann Hall Road are one-way east. Rather than backtracking, I went to Cann Hall Road and turned west. I think Waltham Forest needs to review this and either make the streets 2-way for all traffic or 2-way for cycling.
Cann Hall Road was actually very quiet for a Saturday morning and the Mini-Holland continuous footway treatments had made it to the south of the borough (below); 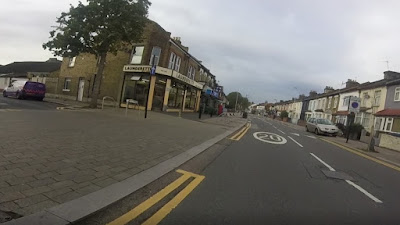 Back into the western part of Odessa was another cell with a much larger filter in Blenheim Road between Ramsey Road and Borthwick Road and my first spot of a road open to people sign (below); 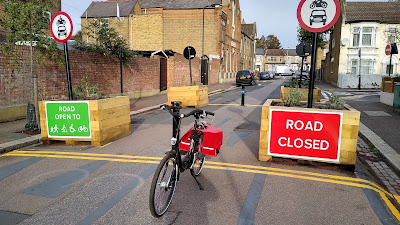 To the south of the filter, the streets don't connect with roads, just a series of existing alleyway paths which aren't suitable for cycling. I went through and found Janson Road where I headed back east and zig-zagged to Ash Road, just south of Buxton Road (below); 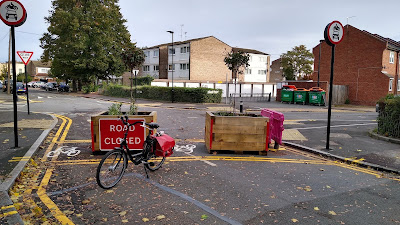 I then turned into Buxton Road and headed west again. Buxton Road is one-way for general traffic and 2-way for cycle traffic. The last time I was here (as this is the unsigned Q6 route) I wrote;
The route does pass Maryland Primary School which is useful, but I really cannot see why the one-way is necessary - I can see a safety issue with drivers knowing they don't have other drivers coming towards them. The wider area needs filtering in my view.
Well, it's certainly filtered now, although if the LTN stays, the street could revert back to two-way for all traffic. At the western end of Buxton Road, the Q6 road crosses Leytonstone Road on a parallel zebra crossing (which again, some drivers didn't fancy stopping at) into Henniker Road and the Maryland LTN. The photograph below shows the eastern end of Henniker Road looking back over the crossing to Buxton Road. 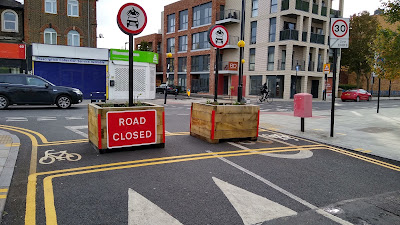 I cycled west along Henniker Road and then turned off the Q6 route into Community Road and left again into Maryland Road and another filter. This one has an emergency access bollard (below); 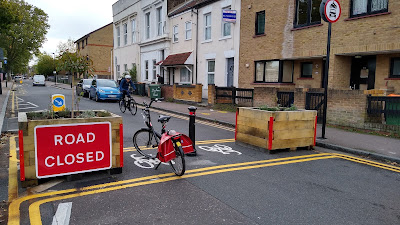 Just east of Falmouth Street, Maryland Road becomes one-way for general traffic heading east with cycling remaining 2-way. At the end of Maryland Road it was a case of finding a gap in the traffic on Leytonstone Road to cross into Bow Street and the last filter of the day marking a return to the Odessa side of the scheme (below - looking back at Leytonstone Road); 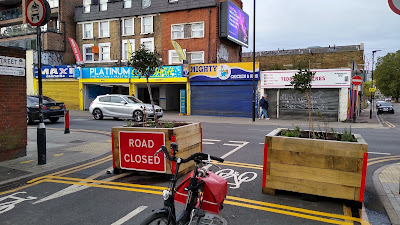 This is another small traffic cell which essentially cuts out the junction of Leytonstone Road and Forest Lane, the latter of which I turned left onto in order to start my trundle back east and home. Forest Lane runs north of the mainline railway corridor (Crossrail and Greater Anglia). It's a soulless place to cycle with it's speed cushions and the entire southern side fronted by a concrete plank fence topped with barbed wire to keep people off the railway - it wasn't busy with traffic which was a small mercy. 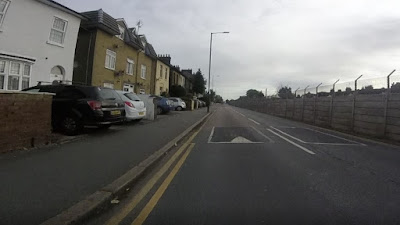 I didn't get round to all of the filters, but the the cells I cycled through were largely traffic-free. I did see plenty of people out walking (certainly the Waltham Forest experience has been that LTNs are good for walking) and a few people cycling around. Even the main road I cycled on weren't particularly busy, although when I left the area just before 10:00, I guess it was still quite early for some people.
The one think I did notice (even more than I did with the Redbridge schemes) was just how many of the streets had been traffic calmed with road humps. I have had a quick look and I reckon that there are over 150 humps across the two LTNs with maybe 10% being speed tables (across whole junctions). 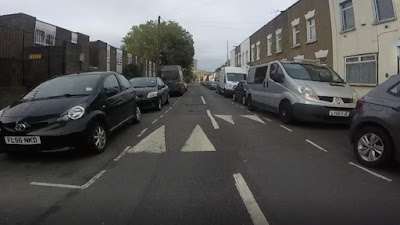 It's hard to estimate how much they all would have cost, but with them, the weight limits on many side streets (to stop lorry drivers cutting through), other bits of traffic calming and the various one-way schemes must surely outstrip the cost of the LTNs by many, many times. And yet all of this is essentially a failure when measured against the impact of an extensive filtering scheme.
The final interesting thing about this scheme is that because the experimental process is being used, additional filters are being added to the LTNs based on initial feedback. This is a great example of the process in action and I really hope the scheme gets the public support it deserves.
I'll leave you with a video of the scheme;
Posted by The Ranty Highwayman at Saturday, October 17, 2020