There seems to be lots of talk out there around enforcing guidance and so I thought it might be useful to explain why this is wrong, but possibly right at the same time.

I'm of course thinking about changes to our roads and streets (as always) and so I think it is worth setting out some basic concepts before diving in. First - what is a law?
From a highways management point of view, a law gives duties to people/ organisations and the necessary powers to fulfill those duties. A failure to comply will give rise to potential criminal and/ or civil liability. A law may also set a minimum level of behaviour which equally gives rise to potential criminal and/ or civil liability for those breaking such.
We then have standards which will prescribe how things should be done in order to ensure consistency. It may be that a standard could be used to ensure compliance with the law. We also have guidance which perhaps explains how we might comply with the law or comply with a standard. It might also set out what best practice might be.
Finally, we have policy. This is something set by a body in charge on what they expect to see. This could be a very high level around what outcomes are important or it could be specific in how a standard or piece of guidance should be applied. One could argue that a policy might also be a standard or a piece of guidance? Yes, it is all a bit confusing.
In the UK we have two types of legislation to be concerned with - primary and secondary. Primary legislation is concerned with Acts of Parliament and they exist to set a framework within which to work within the area being legislated for. We then have secondary legislation which take the form of Statutory Instruments (setting out how things are to done in more detail). 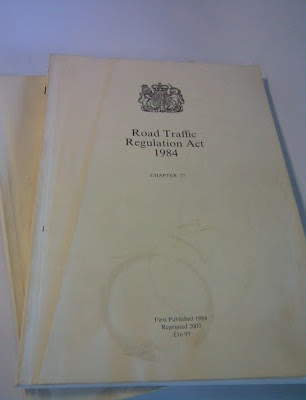 For example, the Road Traffic Regulation Act 1984 (RTRA1984) is, unsurprisingly, an Act which about how traffic (in its widest sense) should be regulated. Despite being a volume of hundreds of pages (for print enthusiasts), it doesn't provide the full detail needed to regulate traffic, but it points to the appropriate secondary legislation.
Take traffic signs. Part V of the Act is where local authorities are granted their powers to erect traffic signs, but there's no information on what they should look like. In order to provide this level of detail, the Act (under S64) grants powers to the Scottish Ministers, Welsh Ministers and the Secretary of State (Northern Ireland has a separate system) to issue secondary legislation. In this case, all three administrations have one Statutory Instrument - the Traffic Signs regulations & General Directions 2016 (TSRGD 2016). 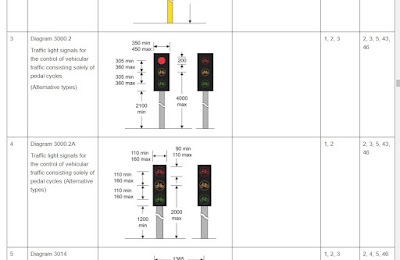 An extract from one of the schedules in the TSRGD2016
which shows the layout of traffic signal units.
The TSRGD2016 has extensive text explaining in detail how and when traffic signs should be used, along with a whole series of schedules with drawings showing the form of traffic signs, how they may be combined and other information required for consistent design and deployment.
What if people don't follow the law? This gives rise to the potential for criminal or civil sanctions, depending on the law involved - and this is where a legal brain needs to comment! For highway and road traffic law, the criminal side tends to be around the sanctions for breaking rules just as exceeding the speed limit, whereas the civil side tends to be around more minor issues such as people putting up unlawful signs which would be dealt with by the highway authority.
Back to TSRGD2016. This is still a complicated document and so we need some guidance. This comes in the form of the Traffic Signs Manual (TSM) which is arranged over a number of chapters and sets out in detail where and how traffic signs (including road markings) may or should be used (some of the advice is around the mandatory and some is advice on the possibilities). Of course, given that the TSM gives information on mandatory requirements, then I'd argue that it is both a standard and guidance. 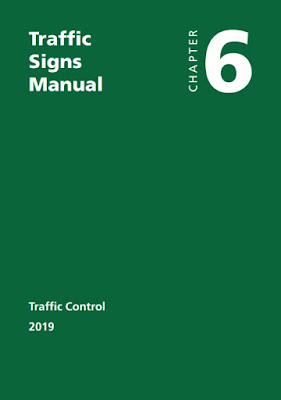 Chapter 6 of the Traffic Signs Manual
The Design Manual for Roads & Bridges (DMRB) is often cited by highway authorities and campaigners. If I were to be playful, I would say it gets cited when it suits an argument. In fact, the DMRB is essentially a set of standards stretching over a number of documents which are for the planning, design, construction and maintenance of motorways and trunk roads which are operated by Highways England, Transport Scotland, the Welsh Government and the Department for Infrastructure In Northern Ireland (national organisations).
There's also lots of notes of guidance surrounding how things should be done, so we have the hybrid of standards and guidance again, but the stuff that has to be done is very much a standard. For example, CD109 - Highway Link Design, sets out how roads are set out with width, length of overtaking sections, horizontal and vertical alignment and so on. The DMRB is all about providing drivers with the consistent and predictable experience required when moving at high speeds and it's why the four national organisations often struggle in historic locations within which the standards don't fit.
This is also why we end up building bypasses of bypasses because the older roads are seen as "substandard" or in some cases, the road is "detrunked" and the local highway authority ends up with a mess to deal with. It's also why trunk road and motorway schemes go through an area and leave weirdly wide bits of road over bridges road tie-ins because they have essentially rebuilt a section of local road to the DMRB standards.
When local highway authorities use the DMRB, they may be building high speed roads which, to the average punter look, and feel the same as a road operated by one of the four national organisations. However, their decision to use the DMRB is a matter of policy. In this case the DMRB may be looked on as guidance in terms of any official status and this is important because in many cases, there is a great deal of picking and choosing on which bits of the DMRB get applied.
From a campaigner's point of view, it is easy to get sucked into the detail of the DMRB with the use of it to "prove" a single point. This might be appropriate if the local highway authority is using the DMRB for a scheme, but I would suggest working a bit smarter and maybe question why the DMRB is being used in the first place and why (inevitably) they are cherry picking what they use.
For the four national organisations, it is a comprehensive document to be applied in full (for the situation) and bits cannot be ignored if they don't suit and so if a local highway authority is cherry-picking they need to be clear on why they are doing so.
I recently reviewed a new road scheme which was apparently designed in accordance with the DMRB. One of the issues with the scheme was a shared-use path was proposed against the carriageway without a verge buffer on a high speed road. It was accepted by the highway authority that a verge was required, but that the design was not going to be changed. In other words, they had decided to use the DMRB as guidance where their design did not meet the standard. More than that, it wasn't clear why they had gone for the shared-use path in the first place which is a very common starting point, rather than the conclusion after proper analysis.
One thing which has come up recently is the scope and use of the new cycling design guidance; Local Transport Note 1/20 - Cycle Infrastructure Design. Some people have been asking how it will be enforced. Well, it is guidance, not the law. Of course, local authorities may adopt its use as policy which might sort of make it more of a standard, but unless the policy can set out how the document is used, that is going to be tough because the guidance gives options and allows nuance. If there are specifics a local authority requires, it needs to define them.
LTN1/20 has essentially been linked to government investment in schemes (in England) and so one could argue that this is a policy position which again pushes this towards a standard, but unless the touted Active Travel England has powers and resources to call-in and demand changes to designs, then it's hard to see how there will be enforcement (from a policy point of view). It may be that schemes have to be submitted to a design review for example, but the government will argue that local authorities are the best placed to make decisions.
LTN1/20 should be the starting point for local highway authorities. We are already seeing it being used by planning authorities to reject planning applications and in time, we'll see it in planning appeals and potentially used as evidence in criminal or civil actions where a designer has failed to take it properly into account. This stems from it having official government backing. So there's guidance and there's guidance!
It's a complex subject to be sure, but if we are at the point where we are arguing about what is on a drawing and how it might comply with the law, standards or guidance, then maybe something as gone fundamentally wrong upstream.
Posted by The Ranty Highwayman at Saturday, November 28, 2020