As I reach the end of my 10th year of cycling for transport, I thought it would be nice to tell you a bit about my cycles. They often appear in this blog and in my tweets; and I'm often asked about them.

I returned to cycling at the start of January 2011 as a means to get to work. I had moved offices from the edge of the countryside to the town centre where I was sitting in traffic twice a day for a 3.5 mile journey thus pushing me to make a change. I had an old Apollo bike at the time which did the job, although unfortunately it was stolen from the supposedly secure compound within a few months.
I then got myself a Carrera Subway (below) which was a really nice bike and I rode it for a few years to and for work. It's still going as a beater for my son, although it's a bit knackered now and sadly not economical to overhaul. 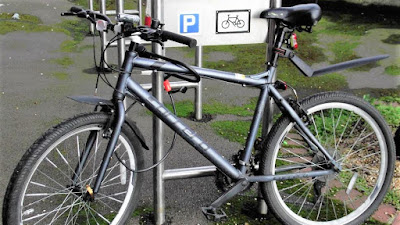 Looking back, the Carrera had 21 gears which was *way* too many and the thumb-push gear changers eventually became a bit painful to use and so I was on the look out for a replacement, although I had managed (I think) a good four years out the bike which included a go at the London to Brighton cycling event.
Next was my big Specialized which I got in the Spring of 2014. I've no idea what model it is, but it had one set of 8 gears on a twist grip - my thumbs were saved! 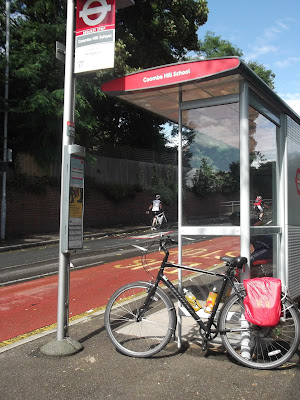 It had an extra low first gear which I put to good use when I used it on the London - Surrey 100 Classic in August 2014, although it got cut a little short by the organisers as a storm hammered the country on the day of the ride. An odd choice I guess, but I struggle with the riding position on racers. I came a bit of a cropper on it in December 2018 when a right turn on some ice had me and the bike part ways. I've still got the bike, but it needs an overhaul and maybe I should get shot of it.
Now, in August 2017 on a trip to the Netherlands, I hired a Batavus Personal bike from our campsite in Amsterdam. The bike was a tank, which is probably why it was a popular choice for hiring. In fact, you see them all over the city being used by tourists. 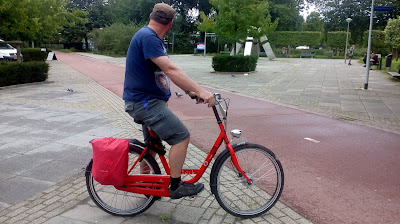 Back in the UK, I had always fancied one and in the Autumn of 2018 I got my hands on one. It's a 3-speed with a coaster (back-pedal) brake, a rim brake on the front and a little dynamo bottle on the front for the headlight (which can be engaged and disengaged). As is the style of the model, the frame number is cut out of the little low cross piece on the frame and this one is A655 (below). 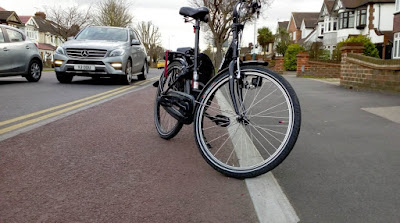 It was a fairly cheap Ebay find and despite having a smallish frame, it was fun to ride, much easier to get on the train than the Specialized and so without really thinking about it I started using it more and more and the Specialized less and less.
As fun as A655 was, I really wanted something a little larger and so I kept an occasional eye out on Ebay. In the Spring of 2019 I spied another Batavus Personal which had a larger frame. I put my bid in and ended up paying only a fiver more than the other one. This one is frame number M3276 and is third hand. The chap I bought it from had used it a bit, but found the three gears to be not enough for his local hills. He got it from a defunct pool bike scheme where it had been barely used and he had kept it in his garage. 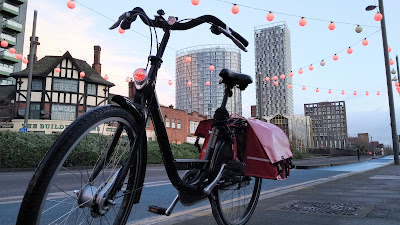 M3276 is a *really* nice bike. It has three speed hub gears with a pair of roller brakes, an LED dynamo front light (which I just leave day running), fully covered chain, a heavy duty rack with a battery-powered rear light, front and rear integrated mud guards, a jelly seat and a frame lock. I added a chain which plugs into the frame lock, a trailer towing ball and a set of rechargeable LED lights. I also invested in a set of Clarijs pannier bags, including a shopping bag which fits neatly inside; 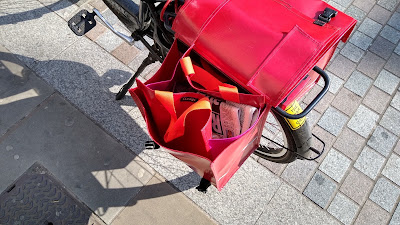 Being able to get out and ride this past few months has been a lifesaver mentally (as I have been working from home since March) and my trips have been functional with regular runs to the local parcel post boxes for Mrs RH's business (below) and of course others have seen me cycling all over East London looking at infrastructure to write about. 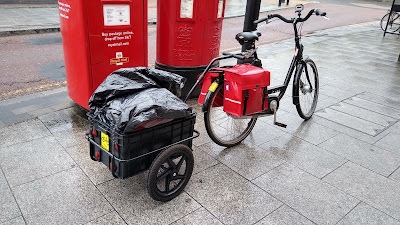 I had M3276 serviced by the lovely people at Havebike at the end of the Summer because it had taken me so many miles each week. I splashed out on a set of Marathon Plus tyres which are puncture resistant, but of course I then got a puncture a couple of months later. I am an old hand now at repairing punctures without taking wheels off because frankly, Dutch bikes are a pain to get the wheels off with all of the hub gears and whatnot. 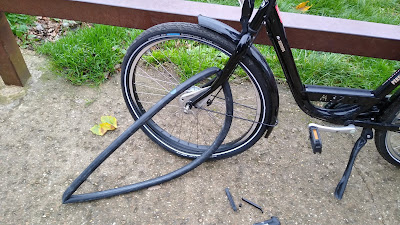 You can by gaadi inner tubes which makes replacement without removing the tube possible and that's what I have on the rear, but hopefully punctures should be rare. As a day to day cycle, my Batavus Personal Bike is easily the best I have owned in terms of it's specification and comfort in use with a fully upright position and a step through frame. 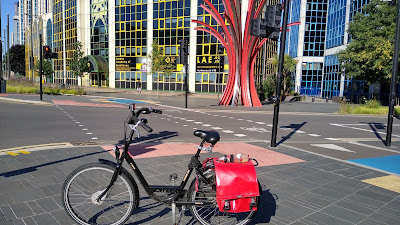 I think the only thing I would change is the rear brake because I do like coaster brakes and the roller brakes are not as sharp as other systems (but they are not affected by the weather and pretty much maintenance-free). I suspect the pair of roller brakes come from the bike being used as a pool cycle because coaster brakes need a bit of practice (my Dutch hire didn;t have a coaster brake). There's also a version with a front rack which would make it even more versatile.
I wish I knew today back at the start of 2011 as I would probably have gone for the Batavus from the start, although I don't think I could have done the two long distance rides on it, although I topped 40 miles on it for my safari ride to Enfield a few weeks back.
Now that's not the whole story. I have two other cycles which I regularly use. First is my Tern Link D8 which is a folding bike. I bought it in the sales at the end of December 2012 in order to have something a bit easier to throw on the train or in the boot of the car for occasional use. It has been used a fair bit in London as well as travelling around the country to look at infrastructure. 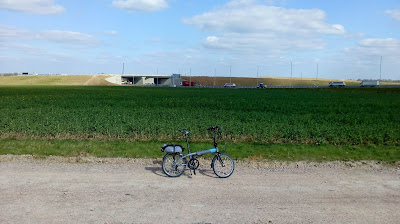 I put M+ tyres on it's 20" wheels some years back and other than adding a set of LED lights and a bag for it's integrated rack, I've not changed a thing and it has only had one service - of course being a folder it's convenient to keep indoors which helps keep it in good condition. One slight issue is that when folded it is luggable rather than portable so you'll want to unfold it to move any distance rather than try and carry it. 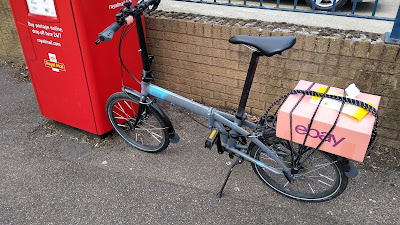 It's a nifty all-rounder really and could easily suit someone as a day to day bike. Tern do a slightly different model with hub gears which is very nice. I think the brand has developed really quality bikes in recent years although the price tags are a higher to suit - I'm glad I picked up the bargain when I did.
Finally, my other cycle is perhaps the most famous of the three on Twitter because it has it's own feed, it is of course @LDNSharkTrike. This is my Christiania Tricycle which we got third hand in early 2016. I must admit, it wasn't a vital purchase, but after trying one in 2015, the opportunity to own one was too hard to resist. 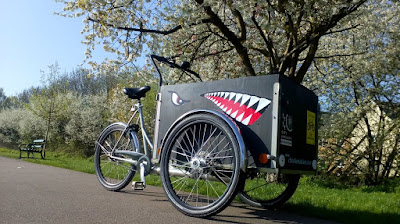 As it has turned out, whilst it's not ridden every day, it has replaced shorter car-based trips to shift stuff such as bags of concrete and timber from the local big box DIY store, supermarket shopping trips into town and joyrides out with the children, although the youngest will probably outgrow the ability for my legs to pedal with her within the next 18-months or so! 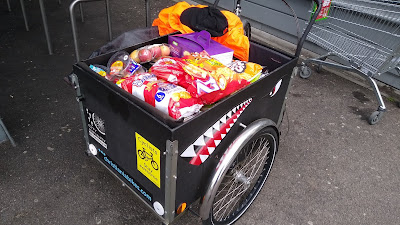 It's great fun and shows how practical a cycle can be and in fact, even with some basic infrastructure it opens up all sorts of possibilities. My local trips with our youngest child is all on shared-use paths which makes cycling easy. It's no wonder that they are so popular in their home city of Copenhagen.
Finally, I have one cycle which I only occasionally use because it's so damned terrifying to ride. It's an old Giant Peloton Superlight which I inherited from a friend who could no longer ride it because of their hip. As I said earlier, I do struggle with racing bikes, but it's just a nice thing to look at, it may need going on the wall as a piece of art, only to be ridden a few summer Sundays! 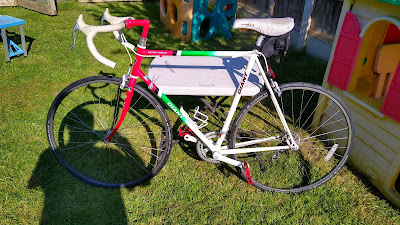 So there you go, that's my cycling history. What do you ride? What's your dream cycle - do you already have it?
Posted by The Ranty Highwayman at Saturday, November 21, 2020