A Glimpse Of The Past

The footways are being reconstructed on my street and the work has offered a little glimpse of the past and serves to remind us a little of the effort that goes into the fabric of the streets that we rarely see.

Our street is around 90 years old and sadly the wonderful old concrete paving flags are giving way to asphalt. It's a maintenance-related decision because asphalt is seen as easier to maintain than flags. That may be true to a certain extent and the new surface will be far better for many, but I like the warmer look of old fashioned flags. Anyway, that's besides the point for this post. 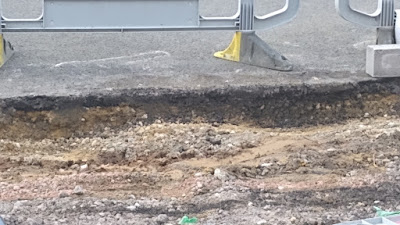 The photograph above is the excavated footway. you can seen the thin asphalt layer of the carriageway (about 50mm) over a lightish brown layer. This lower layer is an old-fashioned road-building material know as "hoggin" or "as-dug" (and there will be all sorts of regional names). It's a naturally occurring mixture of sand, gravel and clay which is just the right consistency for compacting into a good, solid base for a carriageway or footway. 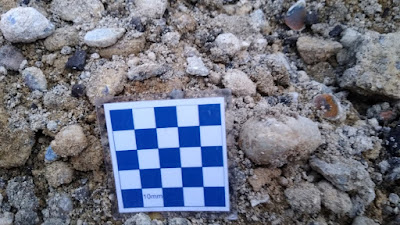 The photograph above is a closer view. The material is a little lighter here because I took the photograph a couple of hours after the other one and the hoggin has dried out a little. Against the scale square, you can see the varying size of stones going from around 30mm-40mm in size down to the tiny particles of sand and clay. The stones are quite rounded which shows that they have been subject to the action of water at some time in the past.
The reason why this material compacts so well is that the graded sizes of stones and sand provide a tight "matrix" with the clay particles acting as a "filler" for the tiny gaps which are left. Hoggin can be compacted to a very smooth and impermeable surface and if profiled properly with decent drainage, this can be a perfectly serviceable material for paths. The problem comes when you try to run wheeled traffic on it because it starts to degrade the surface allowing water to get into the material and left unchecked, it will rut and fail.
The old-fashioned solution to this problem was by the use of "tar and chips". The old roadworkers would complete the carriageway from hoggin and then the surface would be coated with a tar-based bitumen and then stone chippings spread, maybe with a couple of layers. The tar used was a byproduct from the production of "town gas"; gas which was produced from coal. Tar is carcinogenic and so it's use in roads is another legacy of industrialisation.
This means that the hoggin was protected from wheels and rain. If potholes formed, then they were easily repaired and a new surface could be laid over the top. There is a modern parallel with surface dressing and microsurfacing, two techniques which are able to seal an old surface and add a little bit of resistance to rutting as well has having anti-skid properties.
My street doesn't have a tar and chips surface, it is relatively modern (although at least 30 years old I would guess). Any old surface has long since been replaced, but the overall construction is pretty simple. We don;t get heavy lorries on our street and so the thickness of asphalt is appropriate. Main roads will be more heavily constructed (with thick asphalt layers), although running constant heavy traffic on a construction like our street will fail - an issue where side streets are being used for cut throughs.
In building the carriageway, the old roadworkers will have relied on muscle a lot more than today, but there still would have been heavy rollers to help with the compaction - maybe even steam-powered. Today, roadworkers will have a little more help with grab-lorries, mini-excavators and a whole range of compactors from the whacker-plate type up to vibrating dead-weight rollers depending on the job. 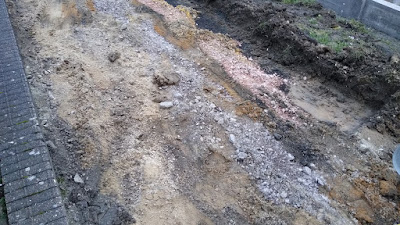 The photograph above shows the footway after the slabs had been removed along with their bedding layer of sand. The old hoggin is still evident across most of the area, but the greyish and pinkish strips on the right are modern. The greyish material will be crushed limestone sub base and the pinkish will be crushed granite sub base. This is where utility works have taken place and rather than carefully setting the hoggin to one side for reuse, it was tipped away and replaced with more modern materials. 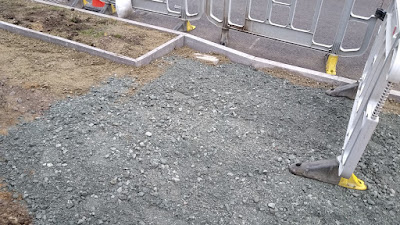 The photograph above shows the next stage of the work. New kerbs have been laid and thankfully the verges are being retained (although the soil is going to need to be cleared of kerbing concrete). The grey area is additional limestone sub base to fill up the space which used to be concrete for a dropped kerb to a driveway. This hasn't been compacted yet and so we get a good look at the different stone sizes. Like the hoggin, we have a range of stone sizes. In the case of the modern specification this will be large stones up to 75mm in size down to dust to fill the gap in the matrix. 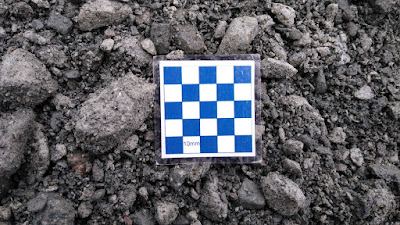 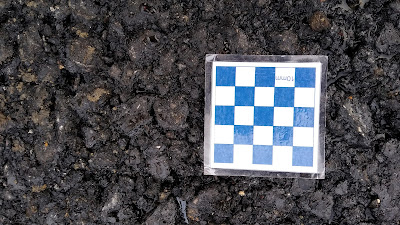 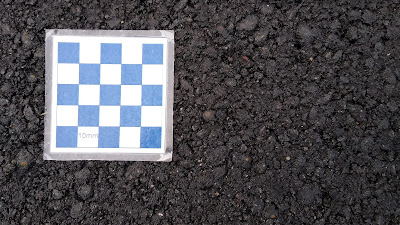 So there we are, a glimpse into a little bit of mundane road building history. Once the work is finished, we'll soon forget about it and go back to taking a nice new walking surface for granted until the next time someone digs it up!
Posted by The Ranty Highwayman at Saturday, January 23, 2021