I detest outdoor advertising. At best it's an ugly addition to the street scene and at worst, it makes it harder to walk along the street given that it adds zero utility.

One of the most ubiquitous pieces of outdoor advertising is the advertisement board, also known as the "A-board". In bygone days, you may have seen the odd one tucked outside a greengrocer displaying prices, but these days it seems that every shop and business operator feels the need to have one in the arms race to entice customers into their premises (Covid-19 notwithstanding).
In many circumstances, the use of A-boards significantly restrict the ability of people flow along a footway and in some cases, they can physically prevent some people from passing where the footway is narrow. For visually impaired people, A-boards create unexpected and unpredictable hazards which have the potential to cause a fall. 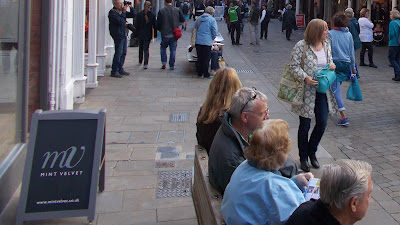 This A-board narrows the space between the
bench and the shop front.
To business operators and the public alike, the rules are not straight-forward, inconsistently applied and so it's no small wonder that streets get strewn with the things. I've often had it explained to me that A-boards are part of the vibrancy of places and that they show people that businesses are open. I've been told that they're needed to help direct people to tucked away businesses and criticising their use is anti-business. Well, I don't care. The ability for people to move safely and easily in an uncluttered environment trumps any of those "benefits".
From a legal point of view, A-boards are covered by provisions of the Highways Act 1980 (England & Wales). S130 is a general duty for the highway authority to protect public rights, including preventing obstruction. S137 sets a penalty for wilful obstruction of the highway - level 3 on the "standard scale", a reference to the Criminal Justice Act 1982 (£1,000) which can be imposed by a magistrate's court. S148 sets the same penalty for depositing things on a highway. 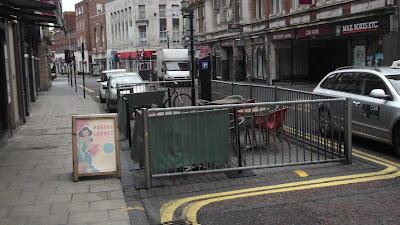 The seating space isn't taken from walking space,
but the poorly place A-board does.
S143 of the Highways Act 1980 gives powers to highway authorities to remove obstructions and S149 gives powers to remove things deposited on the highway. Scotland has its own powers under the Roads (Scotland) Act 1984, but I'm afraid I am not as conversant with these as I am the Highways Act. There are also provisions for licencing of things on the highway using S115E of the Highways Act which is a bit of a catch-all, but generally used for giving permission to miscellaneous "things" on the highway owned by third parties.
There is also planning legislation to contend with. In England, there is The Control of  Town and Country Planning (Control of Advertisements) (England) Regulations 2007 with other variations in the other administrations. The effect is, however, to generally exclude A-boards from planning law, so long as they are placed on the owner's land or with permission from the owner (including the highway authority). More guidance on this is available here. In some cases, a shop's forecourt could have accrued highway rights through public use further complicating the issue. 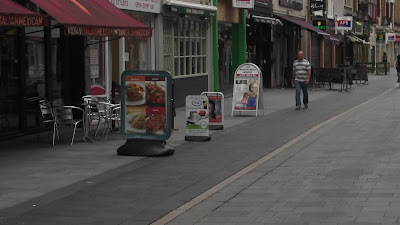 An A-board arms-race. Adverts jockying to grab
the attention of passers by sterilising a whole area
of footway.
In terms of managing the issue, there are a range of approached. For example, Edinburgh City Council has a complete ban on A-boards (apart from some specific situations). This isn't actually a ban per se, because placing things on the highway is already banned in law, it is just that Edinburgh has put into place a policy that it won't grant a licence for them. The London Borough of Hackney has gone even further and has a complete ban without exception. I like this approach because there are no arguments.
Other authorities have policies of tolerance so long as business owners follow general rules (positioning, carrying public liability insurance etc). I'm not entirely sure this is the right way to do it because no lawful ability for people to put A-boards out in the first place and in the absence of a licence with each owner, this is a policy of ignoring the issue. Authorities such as Hertfordshire and the London Borough of Havering operate this way, but with differing guidance. 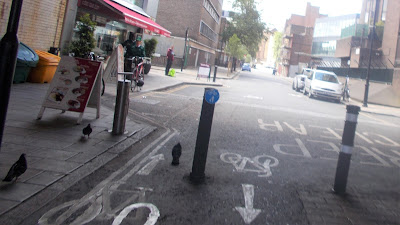 The footway on the left is pretty much blocked.
Many other authorities operate on a licence application whereby the owner must submit an application (with varying levels of detail) which will be assessed to reach a decision. A licence will be charged for on an annual (or longer) basis with the fee covering the administration and presumably a level of enforcement to ensure licenced A-boards accord with their licence conditions and non-licenced A-boards are removed.
What is generally common is that where an A-board is in contravention of the local policy or a licence, it will be removed with a release fee charged. This is because having to go through the magistrates court process to have a fine issued is costly and time-consuming. 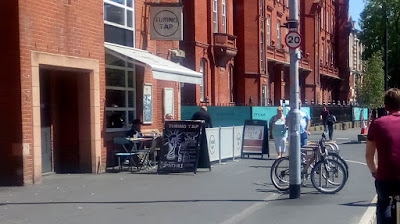 It's not just the A-boards, the streets are under pressure
for seating as well as containing "official" clutter.
So what? There's lots of clutter out there, so surely a few A-boards isn't the real problem here? That's true to some extent. There is lots of pressure on street space, whether it's "official" clutter coming from lighting columns, traffic signs and all of the other stuff; outdoor seating for pubs and cafes; and other things like telephone kiosks, telecoms cabinets and phone masts. However, other things being done badly is no excuse to make things worse.
My general approach has always been that things in the street should earn their right to be there and things which perform more than one function are even better. There are things we need to for basic utility such as providing lighting and having some traffic signs - of course these should be well designed. We might want to encourage outdoor cafe culture and that is fine if again, it is well designed and there is space which means that we should be rejected the poorly thought out. A-boards do not perform a useful function for the street or its users and so well done to the authorities which have banned the rotten things (or who won't licence them by policy if I'm being accurate!)
Posted by The Ranty Highwayman at Saturday, January 16, 2021