As I continue to get my lockdown exercise within a sensible cycling round trip of home, my options are becoming somewhat exhausted. However, I realised there was a relatively new development I hadn't had a nose around and it was as good a reason as any to get out in the fresh air.

So, I wound my way through the hostile streets of Outer London (east) down to the A13 in search of something a little different at Barking Riverside. The area is part of the post industrial Thames Gateway which loosely covers both sides of the Thames from the edge of Central London out to the Thames Estuary. There have been a variety of development models and attempts to regenerate areas; the fortunes of which have ebbed and flowed with the tides.
The area covers the area roughly between the River Roding in the west and The Gores (another water course) to the east. It's hard to pin down exactly what is going on given the mish mash of old industrial land, existing businesses and housing which charts the areas history from marshes at the end of the 19th Century to modern times. The area continues to develop and redevelop with a new residential area under construction towards the eastern side of the site.
My visit took me to the central area between River Road and Thames Road, a newer development bounded by industrial areas to the north and west, a declining industrial area to the south (flanking the Thames) and a part of the old Barking Power Station complex to the east. This phase of development is known as "Rivergate" on the site masterplan with other areas at different states of construction. 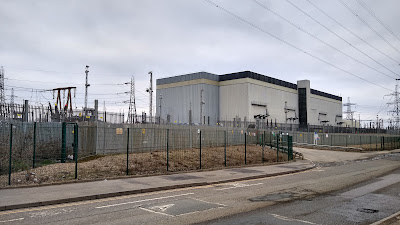 The photograph above was taken on Renwick Road showing a huge electricity transformer complex. The development I sought was behind this to the west. As you'll see on the video which goes with this post, Renwick Road is a very hostile place to cycle.
Renwick Road becomes River Road (forming a long loop which meets the A13 at each end). I turned right off Rover Road into Handley Page Road into one part of the more modern development. 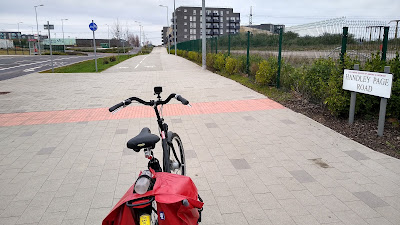 The photograph above shows the Handley Page Road with a toucan crossing just out of shot. A little further up and walking and cycling get their own space. For cycling this is good because you can avoid the buses which help connect the site to the outside world. 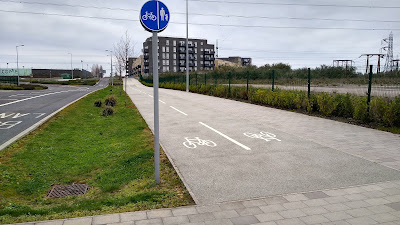 There is plenty of space for everyone (above) and the 3.5 metre wide cycle track feels generous, but at this end of the site, it doesn't really connect to anything, so I assume it will feed into developments replacing the open storage along the Thames to the south. There's also a nice buffer for sustainable drainage. 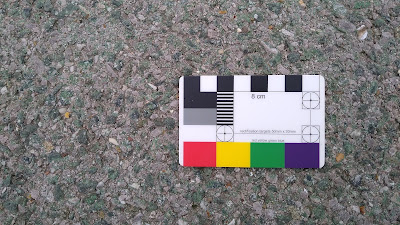 The cycle track is reasonably smooth and in this part of the world, green is the chosen colour (above). There is no tactile or vertical separation between the cycle track and footway which is disappointing given the site has been developed within the last ten years. The development is still under private control, a fact given away by the private parking signs and patrolling security guards. 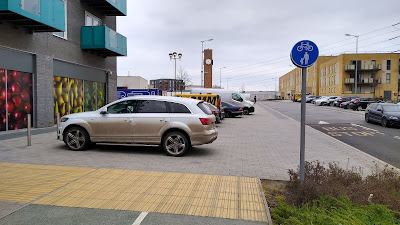 Unfortunately there didn't seem to be much control at the "village square" in the middle of the development where walking and cycling is ostensibly mixed, expect it's made all the more difficult by the car parking free-for all on both sides of the street (above and below). 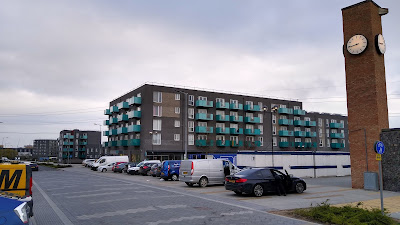 The other big issue with the layout is the junctions. The separation ends and people walking and cycling have to mix again and indeed give way to motor vehicles (below). Here I wanted to turn right into Minter Road because I was running out of development. 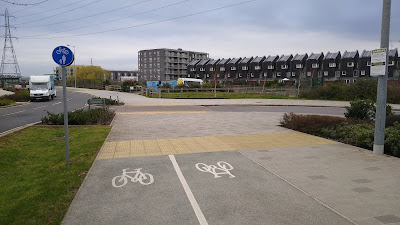 I crossed over and then saw the same kind of layout in Minter Road (below). It just demonstrates that links are easy to design, but junctions need thought and no thought had been given here to prioritise walking and cycling. 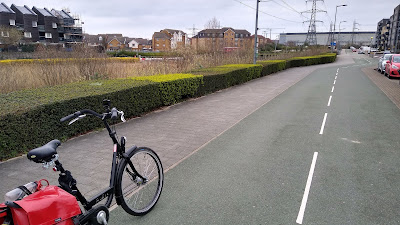 Minter Road does have a great feel about it. There is a wetland area with a more formal lake at one end which I assume is all about drainage attenuation, plus it's under electricity pylons where there will be a restriction on building in any case. Apart from the cycle tracks not actiually connecting to a proper network, the main problem with the two-way cycle tracks in the development is residents living on the opposite side of the street don't have any easy way to access them. 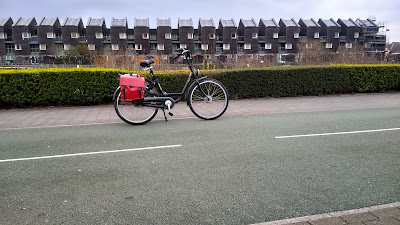 There's actually some interesting modern architecture in the development which is in complete contrast to the existing housing stock which is very late 20th Century box-shifter style (below). 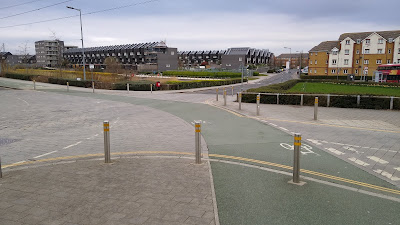 Minter Road meets with Mallards Road with an attempt to carry the cycle track through on the main loop (above). It doesn't work well because drivers see a fairly traditional layout with people walking and cycling perhaps assuming priority. The main loop heads back round to Handley Page Road and so we see a triangle spine loop within this part of the development.
Mallards Drive is an older street and there are no cycle tracks so people cycling are back on the carriageway and now mixing with the buses which serve the heart of the wider development. There could have been an extended cycling network being new build, but for some reason it was forgotten. Just off Mallards Drive is Drake Close/ Harlequin Close, a mix of flats, houses and town houses (below). 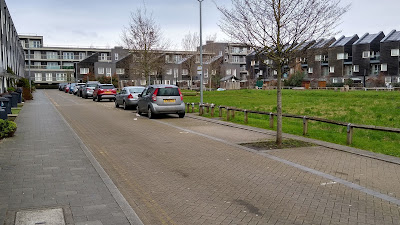 The dwellings surround a central open space with some fronting and some having back yards/ gardens opening onto it. Again, the open space also provides drainage attenuation. One thing which struck me was the attempt to use the car parking as traffic calming; with the block-paved carriageway and the square it really felt quite Dutch/ Scandinavian.
Sadly, the demands of parking cars everywhere has taken over the good design and rather than maintaining the staggered and subtly laid out parking spaces, the white paint has just stuck them all on one side of the street. In the photograph below, you can see the original parking bay on the right had side of the street in the distance which would have created a stagger with the one in the foreground. 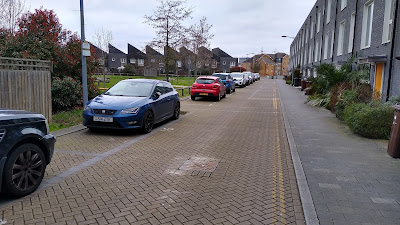 I then carried on up to Galleons Drive with the older late 20th Century housing on one side and the new on the other. The original footway has been designated as a shared-use path, but I stayed on the carriageway and headed west over a watercourse to another section of newer development.
The separate footway and cycle track model reappeared on Galleons Drive, although the cycle track was a bit narrower than before and someone had forgotten to mark it as two-way. 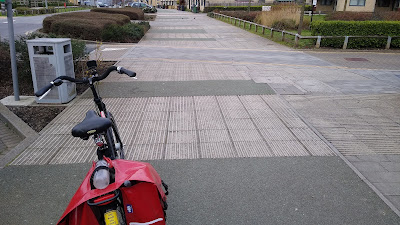 At the side streets the designers give priority to motors again. The photograph above is the entrance into McAllister Grove which is a small access road forming part of a network of residential streets. There has been an attempt to differentiate the walking and cycling sides at the junction, but with a shared area as a landing to an informal crossing point and a second junction in the distance, we have death by tactile paving and instead of "tram and ladder" style, we have corduroy. It's a total mess. 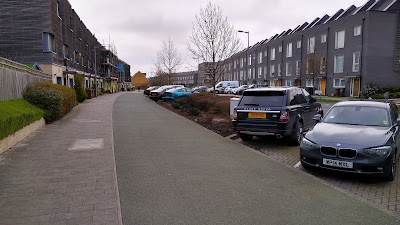 One thing which was almost done well was some of the car parking along Galleons Drive. It's echelon style with the angle arranged so most drivers would reverse into the space. This means that as they leave the space, they have a decent view of what's happening around them. Unfortunately, some of the bays abut the cycle track leaving vehicles overhanging. 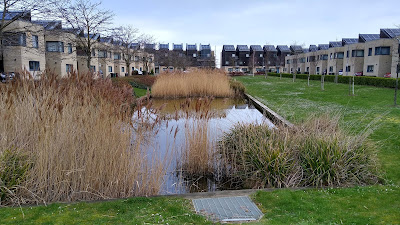 The photograph above is another open space/ drainage attenuation feature between McAllister Grove and Middleton Grove. The housing here includes some single storey dwellings (below) and there are other open space areas, but behind the dwellings with the same private space opening out onto them as I mentioned earlier. 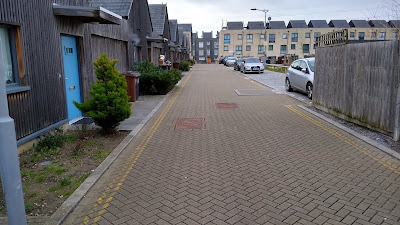 The street layout is pretty compact with the roads design to provide access rather than car parking (below). Although the kerbs to the footways are low, the designers unforgivably forgot to drop them where people need to cross the road. 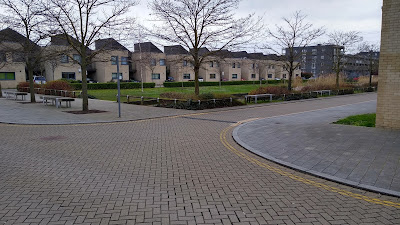 The original intention appears to have been having mainly off-street car parking (some cleverly hidden within the private curtilages with a bit of on-street provision designed in to the layout. Unfortunately, this has been abandoned in favour of marking out lots of new spaces on one of the footways (Lawes Way, below). This leaves no space to get passed. 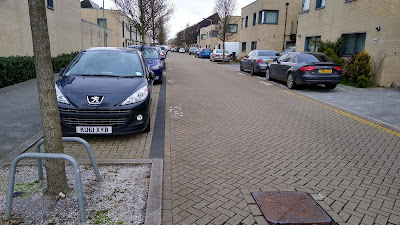 Over on the western extent of this phase of the development we have Crossness Road (below) which is a very wide street, yet cycling is given some intermittent paint and you can see some of the parking issues spilling out on the right hand footway. 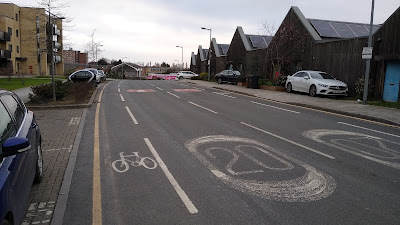 The northern end of Crossness Road joins the Thames Road industrial area and the south is still under development.
I really tried hard to like what I saw on this little trip and to be sure, there are some nice features and even a half reasonable attempt to try and sort out a street hierarchy. Sadly, though, there are too many mistakes and compromises at both the planning and detail ends of the scale.
One of the most significant issues is the poor connectivity to the rest of the world. The site has a Public Transport Accessibility Level (PTAL) of mainly 1a/ 1b with some areas of 2. This is what suburban London has which means the use of private cars will still be important or necessary to some residents. There is an extension to the London Overground being built at the moment to the east of Renwick Road which will allow interchange at Barking.
However, the area is still relatively isolated because of natural and man-made barriers and coupled with the hostility of Renwick Road and River Road, cycling isn't going to be an option, especially with the lack of coherent local network. Sadly, the UK seems to suffer from a malaise of building car-centric developments. Even where public transport is planned, unless it is open and operating for the very first person to move in, the use of the private car is being baked in from day one.
The other thing to note is that the there were also lots of existing residents and businesses in the area who were forgotten about with transport and their existing travel habits will be tough to change. Frankly, there needs to be a detailed walking and cycling review of the area with investment into making proper changes, including better crossings of the A13/ rail corridor to the north. I shall leave you this week with a video of my spin around the area.
Posted by The Ranty Highwayman at Thursday, March 25, 2021