The other day, I posted a photo of a dropped kerb at a brand new toucan crossing which had been left sticking up about 25mm above the road surface. I thought it was obviously poor, but some disagreed.

Having a flush dropped kerb at crossing points really shouldn't be a point for debate and frankly, it's not. If you disagree with flush kerbs then you are purely and simply wrong. 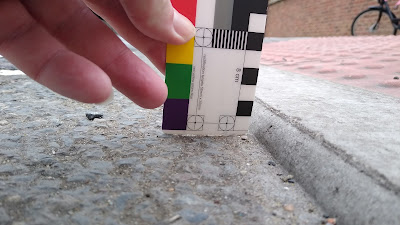 The photograph above shows the offending kerb and before I talk about why kerbs should be flush in these situations, it's worth exploring a couple of other points. Notwithstanding drawings and scheme specifications, the actual type of kerbs we have available make kerb upstands more likely simply because the units are not designed to be laid flush. 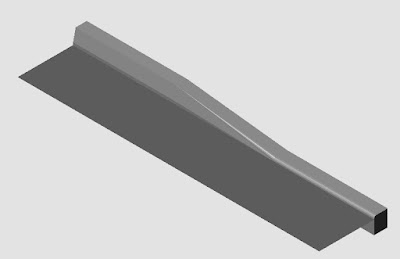 Many British Standard kerbs are designed for road only applications and a general approach is to lay them with a nominal 125mm upstand. The image above shows a HB2 standard half battered kerb laid with a 125mm upstand and a BN3 bull-nosed dropped kerb. Half battered means the top part of the kerb is angled back from vertical and bull-nosed means the traffic-facing corner is rounded. Between the two is a transition kerb.
To get the dropped kerb laid flush with this units, we either have to run with a general upstand of 100mm or cut slices out of the transition kerbs to be able to tilt them down to meet a flush bull-nosed kerb. The problem with a flush bull-nosed kerb is that it's hard to properly compact asphalt tightly up to it. 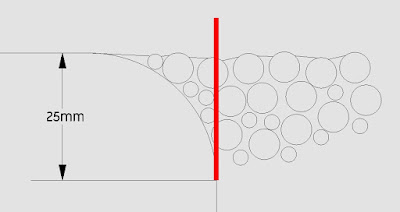 The sketch above is a representation of the stones within the asphalt at the interface with a bull-nosed kerb laid flush. The stones and other particles within the asphalt matrix to the right of the red line never compact properly and the result is they "fret" or gradually come loose through traffic and weather action and eventually potholes form.
These dropped kerbs are actually designed for vehicular traffic, not pedestrians. Many manufactures make kerb ranges which are all square edged which means it's easier to get the dropped kerbs right, but the British Standard kerbs remain the most common and with retrofit schemes, they are often the option which fits into existing kerb lines.
The other feature of the bull-nosed kerb is that the upstand can help direct water and this is often the reason designers give for not providing a flush kerb; so that the crossing point doesn't get flooded and in low temperatures, ice doesn't form.

The sketch above shows a bull-nosed kerb with water (in blue) as it would run past assuming a general gradient along the road. The upper image has an upstand and with 500mm of water running along the channel of the road, this is the "flooded" area which stays in the road. The lower image shows that water would go over the kerb and the bottom of the ramp. The width of water running along the road channel is a function of intensity, road gradient and road crossfall.
However, this is the situation during a downpour with water running along the road channel and so in both cases, if the rain is that heavy, pedestrians are still going to have to deal with water. A well-designed crossing will have involved the designer looking upstream (hydraulically speaking) to see what the drainage is like. Having a gully just upstream of the crossing will help reduce the amount of water passing the crossing point.
After a rainfall event, there might be some residual water sitting on the kerb, but this will drain away. In the round, I don't buy this argument because it is tenuous at best. I imagine that crossings with puddling problems will be more down to local surface irregularities and quality of installation rather than flush kerbs being a drainage problem on principle. Perhaps designers are double checking local levels properly because it's more staff time and therefore cost.
In the UK, we provide flush kerbs at crossing points to favour wheelchair users (electric, self-propelled and attendant propelled), mobility scooter users, people pushing prams and buggies; and indeed push scooters. The intention is to make the transition from footway to carriageway and back as smooth and easy as possible. It does then follow that we provide appropriate tactile paving to aid visually impaired people (more on that here).
If we are left with an upstand, it means that users with small wheels risk catching them which could end up with people people being tipped from their conveyance - a fair greater risk than the theoretical possibility of it being a bit wet. 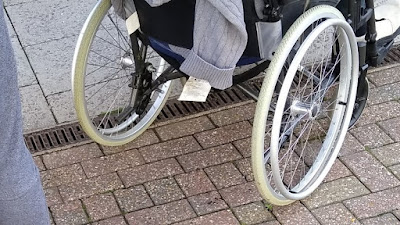 The wheelchair in the photograph above has a small pair of wheels which can turn in all directions (like supermarket trolley wheels). If being self-propelled, the user may not be able to easily mount a dropped kerb with an upstand and if being pushed by an attendant, there is a risk that the person gets tipped out if those wheels get caught on a kerb.
The answer to this problem is to use square edged kerb systems which certainly fit with urban realm outcomes far better than the British Standard units. A nominal kerb face of 125mm can be high for people stepping up when crossing away from a formalised crossing point, although I should add that some advocates for visually impaired people would prefer the high kerbs for certainty in detectability.
The other option is to turn the bull-nosed kerb upside down as it has a square edged base (or use a square edged channel block). It requires a skilled roadworker to get this right, but there's no excuse. Some specifications (including guidance) suggests a tolerance of flush to +6mm which is fine, but in my experience, a skilled roadworker will be able to locally set out a dropped kerb to be flush. 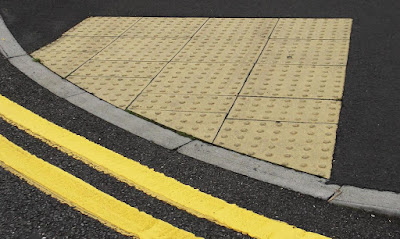 If you look very closely at the photograph above, you will see that the flush dropped kerb has been formed with bull-nosed kerbs laid upside down. There is a very slight upstand on the right-hand end, but it is well within 6mm.
None of this stuff is particularly complication, but it does require good design, clear instruction and skill roadworkers to bring it all together for the right result. If you have upstands on crossings near you - demand better.
Posted by The Ranty Highwayman at Saturday, April 03, 2021