This route runs for 3.8km between Bournbrook (and Birmingham University) on the edge of Selly Oak and the Gay Village area of the city centre, passing through the edge of Edgbaston.
Where the A34 didn't really confront the severance issue, and despite being another bidirectional scheme, the A38 Blue Cycle Route is better with some areas of shared paths on the other side of the road connecting with toucan crossings so one can ride a bit, cross and then ride more quickly and in comfort on the cycle track which is again, wonderfully machine-laid. 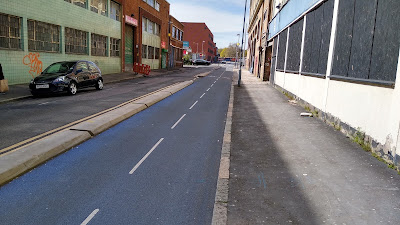 Starting at the city end on Kent Street in the Gay Village (above) we're immediately confronted with a conundrum. The formal protected cycle track starts here and competently runs for 275m until it meets the A38 Bristol Street. The conundrum is whether we should be providing protected cycle tracks in city centres at all?
In an ideal world, city streets would be low or no vehicular traffic and so cycling on the "carriageway" or centre of the street would be the default, but in this part of the city, we still have plenty of access for motors and so building cycle tracks is required to grow a level of cycling. Of course it also raises the question of "through cycling"; that is where people cycling have business elsewhere and we should be diverting them away from areas busy with pedestrians.
This might start getting solved as Birmingham delivers it's transport strategy including the ambitious "City Segments" programme which will use a series of traffic cells to push through motor traffic onto the large city ring road and which has been accelerated by the Active Travel Fund.
Anyway, Kent Street connects to a bit of a local network of one-way streets (below) with two-way cycling and is a good a place as any to start/ finish. 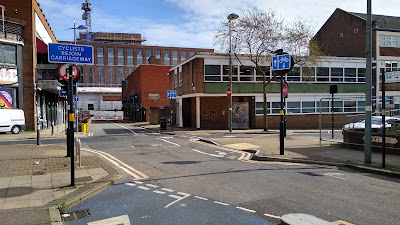 At the A38, the cycle track turns south from Wrentham Street onto the A38. You can see in the photograph below that vehicular access from the A38 is closed which is part of the City Segments programme. 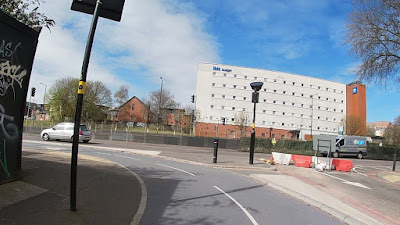 On the A38 itself, we have some fairly standardised treatments for the cycle track, although it's a bit narrower than the 3m of the A34 route in places. The first section is to the east of the A38 (below). 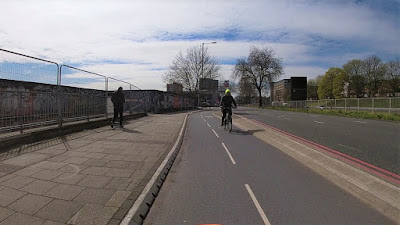 There's a very large junction with the A4540 Belgrave Middle Way (part of the city ring road). The junction is so large that as well as pedestrians having several stages to cross, cycle traffic has two crossings, although at least heading south, I caught a pair of greens and went right through (second stop line below). This is because the left turn for traffic was held and I was running with the A38 ahead traffic. 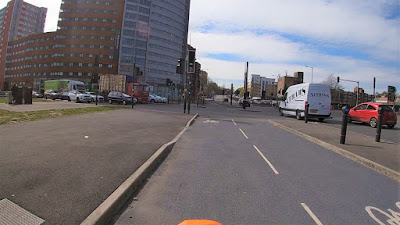 At the junction with Bellvue (below), the cycle track bends out from the A38 (now Bristol Road). The heavy kerb separation between walking and cycling changes here to something more subtle which is feels more shared space which would not be my preference. 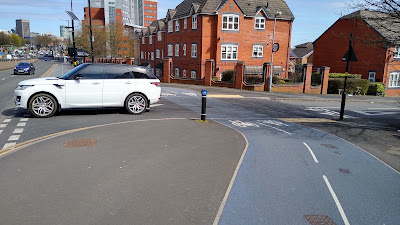 Just south of here, the cycle route crosses to the western side of the A38 (below) and this coincides with a new right turn for general traffic into Wellington Road and the centre of Edgebaston. This was in compensation for the junction of the A38 at Priory Street which has had its right turn to Edgbaston banned to accommodate the cycle route - some network-level thinking going on there! 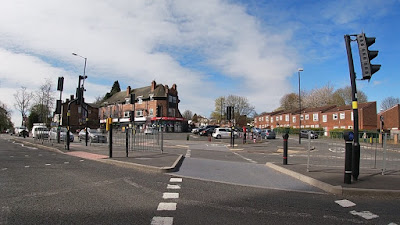 The route then continues south with the cycle track around 3 metres in width. There's a small buffer forming a strip for dropped kerbs to private accesses and it's notable that the cycle track stays level while drivers face a short, steep ramp. This section has a few shared areas where toucans land (because there isn't space to "float" the landings) and one location has a very large tree. It's not a massive issue. 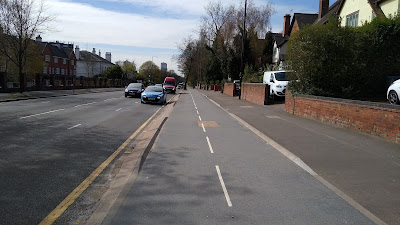 Next is the junction with Priory Road (below) and the new right turn at Wellington Road pays its dividend here with the banned right turn allowing cycle traffic to run with general traffic. The issue here, though, is cycle traffic cannot turn left and right from the cycle track and so the toucan crossings around the junction have to be used. It's a common issue with two-way cycle tracks being threaded through junctions where there is still a demand to maintain traffic flow, but it's probably an iteration we'll have to go through. 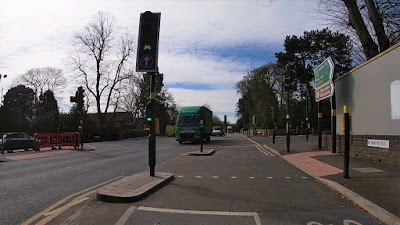 Further south and there's an example of one of the toucan crossings on the route (below). It is isn't ideal to have to squeeze people into the same space, but it works fine and gives cycle access too. This crossing is staggered and so maybe a future iteration would be to have a single stage crossing with the space from the central reserve going to provide a floating landing on the cycle track side, although this would probably require a mast-arm signal for visibility. 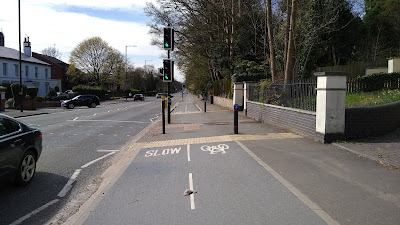 Then there's the entrance to the Elmhurst Ballet School site which curiously has cycle traffic giving way at the (large) private access. Perhaps it's the poor emergent visibility from the site which pushed the design decision, I'm not sure. A little further south and things take an interesting turn - literally. The route on the western side of the A38 ends and people cycling are invited to cross the road within a signalised crossing (below). 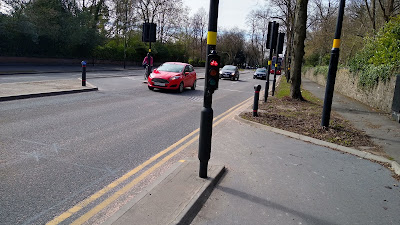 It's quite an odd arrangement, but when you have a look around this section of the A38, you'll see the western side has a fairly narrow footway and verge full of mature trees. The eastern side has a slightly wider verge, but also mature trees. As luck would have it, there is a wide central reserve with space for a cycle track (below). 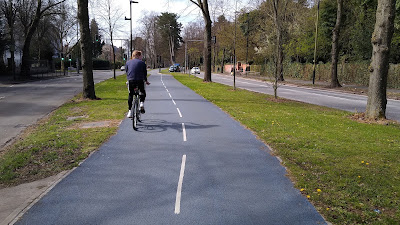 The reason for this piece of luck is a quirk of history whereby there used to be a tramway in the centre of Bristol Road as can be seen in Carlton Reid's article. One of the reasons for central tramways (and indeed bus lanes) is that it is very easy to give priority through junctions. Have a look at the modern arrangements on Middenweg in Amsterdam or Manchester Road in Bradford. The disadvantage is the passenger waiting and crossing experience might be less attractive.
This is one issue with the central cycle track on A38 - you can only access it from certain points via side roads or toucan crossings. If you live in the street fronting it you've either got to cycle along the footway to a crossing point or try to cross the verge to get onto the track. 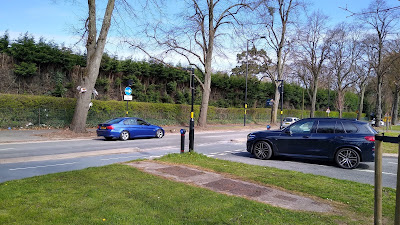 Another interesting feature is motor traffic management at some of the junctions where a network level approach is being taken. Above is the junction with Eastern Road where drivers can leave the side street by turning left onto the dual carriageway or right through the central reserve. Right turns from the A38 were banned as part of the scheme. The cycle track moves over to one side to give drivers space to get into the central reserve before checking for a gap to complete the turn. 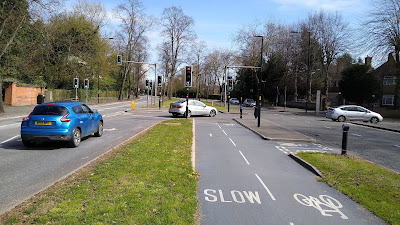 Above is a slightly different arrangement at the junction with Pebble Mill Road. In this case, right turns from the A38 are permitted, but because these can be heavier, they are signalised. Only left turns are possible from Pebble Mill Road. Cycle traffic can access a short protected cycle track in Pebble Mill Road when there is a gap in traffic on the A38 (below). 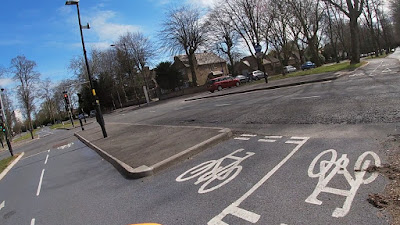 It might have been nice to have signalised solution which runs for cycle traffic when the general traffic right turn runs (although an extra stop line would have been required where drivers perform U-turns on the A38) because not everyone is good at judging driver speeds to find a gap.
Pebble Mill Road could carry on the central cycle track theme in the larger central reserve providing a link to Pershore Road which has a cycle track on its eastern side heading north from the junction.
Back to the A38. The old tram section comes to an end at the junction with Edgbaston Park Road and the University of Birmingham. The cycle track crosses back to the western side (well more north by this point) and another give way (below). 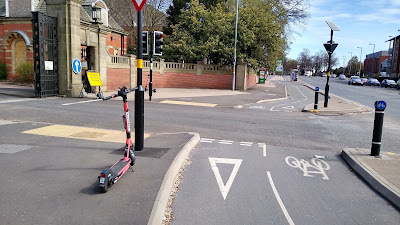 I'm not quite sure what is happening here, but it's within a signalised junction serving a university access road. On the day of my visit, there were signs showing the university was "in" and yet in Google Streetview, you can see "no entry" in certain years. The signs can be manually "flipped" and you can see this at the other end of the access road.
Looking at the signals on the A38 for the right turn, it appears there is a "banned right turn" which comes into force at different times. So, there is a facility to reverse the traffic flow at this access, although I haven't found the details - the traffic order would be an interesting read! There is are cycle lanes on both sides of the access road which operate at all times and so maybe the give way makes sense for the specific conditions.
Slightly further on the Blue Cycle Route ends at a shared area by a toucan at the junction with Aston Webb Boulevard. In fact the last 60 metres of Blue Cycle Route is a cheeky repainting of an existing cycle track which is essentially a painted cycle track on a wide paved area. This carries on along Aston Webb Boulevard, but it's not blue.
Here's a video of the route from the city to the university;
So that's almost it. There are two things I want to finish with. One thing which I'd like to see is a some better wayfinding along the route to show local destinations as these two routes are core spines for future development. I'd also like to see a bit of information about journey times. Some people don't like time-based cycling traffic signs, but they are a great way of showing potential users just how quick cycle trips can be - maybe a few cleverly placed totem signs might help get the message across.
There is lots going on in Birmingham and it's definitely one to watch. For me, the City Segments plan is incredibly interesting and pretty revolutionary for the UK. I'm looking forward to my next visit!
Posted by The Ranty Highwayman at Saturday, May 08, 2021