For those reading my posts over the last year, I have been eager to get out and see infrastructure wherever possible, but aside from the odd return trip by train from Central London, my adventures have been within leg-range of home.

I have been trying to do my bit by sticking to travel rules and so as restrictions eased a bit, I was really pleased to have the opportunity to travel much further and life took me to Birmingham for a work trip. As you might expect, I took a cycle because it is the perfect way to get a little insight into a place - you can go where cars are not allowed, you can usually stop on the spot to look at things and you're about 4 times faster than walking, so you can cover more ground.
Although I managed to see lots of things in the city centre, the pieces of infrastructure I really wanted to experience were the two Blue Cycle Routes which provide ways into the city centre from the north along the A34 and the southwest along the A38. This week, I will look at the A34 Blue Cycle Route.
This route starts in the Birchfield neighbourhood and runs to the west of the A34 into the edge of the city centre, right by Aston University. It passes through the Lozells and Newtown neighbourhoods and provides a spine route accessed by many car-free links. The basic design is a 2-way cycle track which makes sense next to a large road (which creates significant severance). 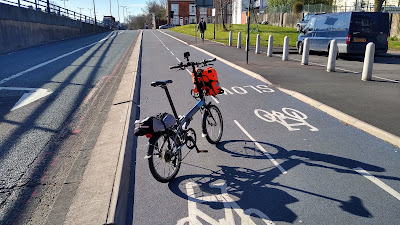 The photograph above is just by New Inn Road, one of the many filtered side streets giving excellent access to the route from the places it serves. The cycle track is generally 3m in width with a buffer on the carriageway side and a stepped footway. There are some different design decisions along the route and a few compromises, but it's a very clear and legible with the blue asphalt. I'm not sure why blue was picked (red is my personal favourite), but the surfacing is a machine-laid asphalt concrete or bitmac / dense bituminous macadam in old money as you can see below. 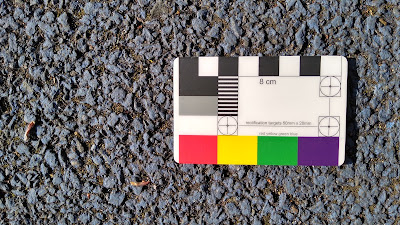 There is a significant issue however (at the wider network planning level). The A34 is a really complicated dual carriageway which has a core road in the centre and long slip roads which are a cross between local service roads and slip roads. Many of the junctions are grade separated (over and under the main road) and the whole thing is a huge barrier between people on the east and west.
This means that people living to the east of the A34 are going to have trouble accessing the route in many locations and where there are crossings, they are often odd mixtures of subway and footbridge such as can be seen at the Lozells interchange. Further south, access is a little easier, but there isn't really a cycling network. However, you have to start somewhere and building such a significant piece of infrastructure along a key city corridor is a bold statement of intent.
As with any piece of linear cycle route, the links are fairly simple, pick a cross section and go with it - it is the junctions which are always the issue and the A34 route provides a variety of treatments.
Where minor side streets join the A34 corridor, there is already a certain level of filtering because of the dual carriageway and so drivers have a left in/ left out arrangement. Consequently, people have to drive a long loop if their journey goes/ returns the other way. From a cycling point of view this can mean left hook for northbound cyclists is risk, although in some locations such as Wilson Street (below), being exit only for drivers removes this problem completely. 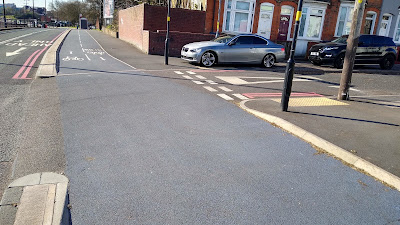 In locations where the A34 connections to larger roads, there are signalised solutions for the cycle track. Below, is the junction with the B4144 Lozells Road, just to the west of the roundabout it joins. Pedestrians unfortunately keep the staggered two-stage crossing you can see to the right, but cycle traffic gets a single stage. This is essentially because people can cycle more quickly than walk and so take less time from drivers - the scheme manages to leave quite a bit for drivers! 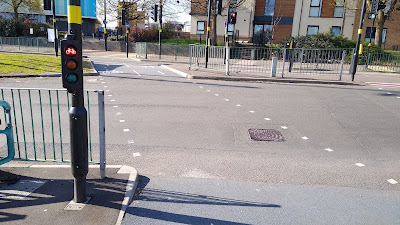 South of the junction we have one of a few compromises where the route is shared with pedestrian traffic (below). The compromise comes where the highway space is pinned between the main A34 in an underpass and the edge of development; with a zebra crossing. There just wasn't space to "float" the zebra crossing landing point 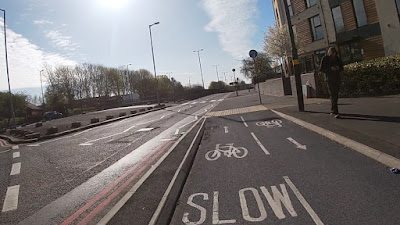 A little further south and we have the junction with Newbury Road (below). Again, pedestrians have to put up with a 2-stage staggered crossing and cyclists have a single stage crossing. 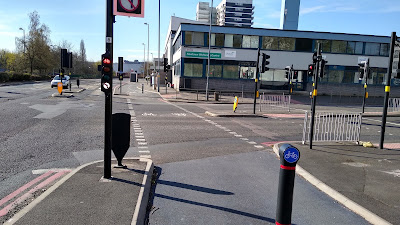 This junction is interesting when viewed looking northbound (below). The nearside lane is a "hold the left" and what this means is that the cycle track runs on green with the A34 mainline which provides lots of green time for cycle traffic. When the left turn comes into play, cycle traffic is held. 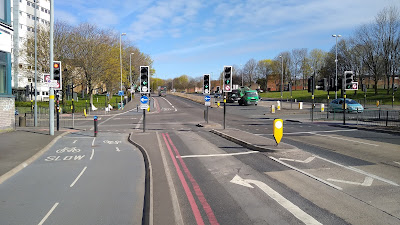 More unusually, buses are allowed to proceed ahead in this lane which essentially breaks a bus lane. In other words, we have a bus lane, a left turn mixing zone for left turning traffic, but the bus lane being taken virtually through the junction to the marked bus lane beyond (like a bus gate). In theory (and I don't know if this happens here), an approaching bus could be detected and trigger the movement. Mixing zones are used in other cities such as Copenhagen and New York, but that's where right (UK left) turning drivers and ahead cyclists mix. Doing it with traffic and buses is a much better balance of power! 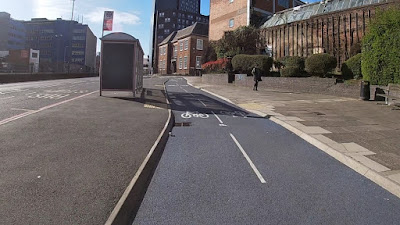 Talking of buses, there are plenty of bus stops on the route and most are decently "floated" within the generous space. In some cases, I would prefer to see the shelters to be maybe better positioned with clear ends to improve intervisibility between passengers and cyclists. 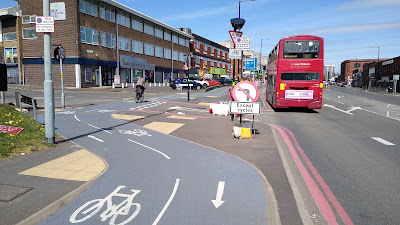 There are also some examples of the "bent out" layout where the cycle track turns out from the main road, crosses the side street and turns in towards the main road again. Above is the junction with Lower Town Street which interestingly only allowed turns from the A34. I say "was" as this has now been closed to general traffic as part of the Active Travel Fund Tranche 1 programme in the city last summer and as a result the potential for left hook has been removed. 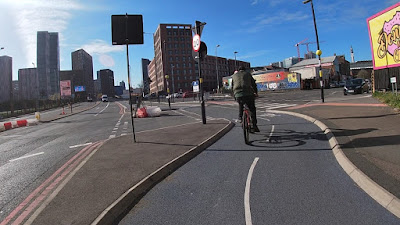 In a couple of locations, zebra crossings are placed on the side roads which I take to mean that turning traffic is a little busier such as Cecil Street (above), although in this case, another ATF1 scheme had closed the left and right turns from the A34 which makes the zebra crossing redundant and the layout far safer.
Bent out cycle tracks are useful because they allow drivers to leave the main road and stop if there is cycle traffic. It's a sustainable safety feature which breaks down movements and in this application, cyclists don't have to give way and therefore gain an energy penalty as each stop uses around 100m worth of cycling energy. 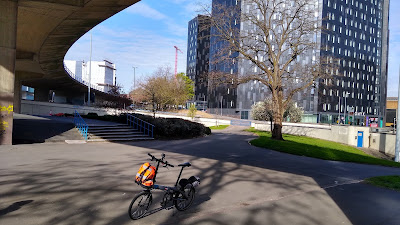 The route crosses the A34 on a toucan crossing just north of Lancaster Circus and then it follows pre-existing (and of its time) infrastructure down into the subways under Lancaster Circus and the A38 Aston Expressway (above). I did get slightly lost here and I think some specific Blue Route branding and signage to guide people over the toucan and through the subways would help. 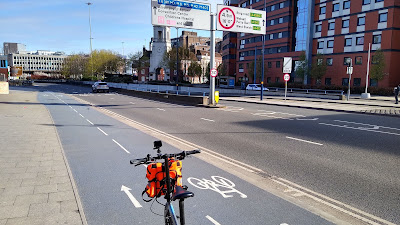 The route pops up out of the subway at the B4114 James Watt Queensway on the northern edge of the city centre (above). I'm often out looking at things at the weekend, but this time it was a weekday at around 08:30. As it was half-term the streets were still fairly quiet (including the Blue Route), but what struck me was the demographic of the other people I saw out cycling - all ordinary clothes and ordinary cycles just pootling along. 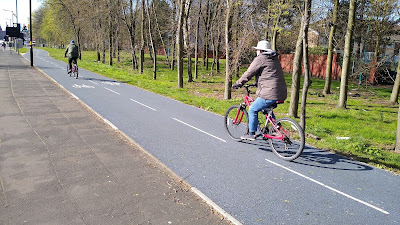 I had my video camera and so here's a glimpse of the A34 route from the edge into the city where I shall leave you this week.
Posted by The Ranty Highwayman at Saturday, May 01, 2021