In Search Of The Diagonal Divider

The "Diagonal Divider" is a relatively rare beast, but if you search carefully enough, you can find some interesting examples. Thanks to a little bit of crowdsourcing on Twitter, I've managed to collect a few more examples for my collection which I recently visited by cycle.

OK, many people won't have a clue what I am on about (settle down), so let's start with a little more information. A diagonal divider is a type of modal filter which uses the space within a crossroads to create a pair of opposing bends for motor traffic. For those that don't know, a modal filter is a point or section of street through which different classes of traffic are filtered out. This usually means motor traffic, but filters can be designed to permit certain classes such as emergency services vehicles.
Diagonal dividers are methods of filtering which can be see all over the world and they are a feature found in the excellent NACTO Global Street Design Guide from which I reproduce this nice little graphic;

As you can see, the general approach is to use one of the diagonals to "break" the general traffic grid while still leaving things completely permeable for walking and cycling.
Of course, with NACTO being a US organisation this might give a little insight on the use of diagonal dividers given how many cities have streets set out on grids. There's an interesting graphic in the 1981 Federal Highway Administration report "Improving The Residential Street Environment" (Figure 3); 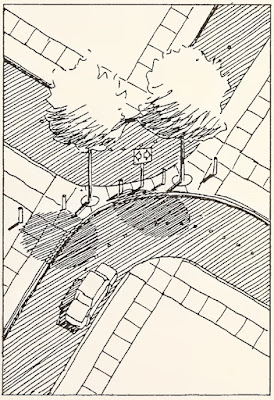 The report was written by Daniel T. Smith Jr and Donald Appleyard, the latter of which some readers will know as being a giant in liveable street design and research in the 1960s and 1970s - it's a similar diagram to that in his more famous (and hard to get hold of) work "Livable Streets". In this case, Smith & Appleyard call the features "diagonal diverters". As is often the case, we are looking at something which has decades-old thinking behind it.
Building streets on grids is a really space efficient layout and it's thinking which can be found in the contemporary UK "Manual for Streets" where there was interest in the efficient use of space with layouts and junction design stemming from it.
Permeable streets are fantastic for walking and cycling, but they can suffer from rat-running, high driver speeds (where roads are straight) and collision risk at the crossroads. Smith & Appleyard use diagonal dividers in three layouts in Improving The Residential Street Environment (below). 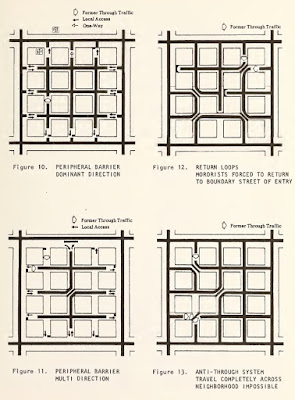 My favourite of the three layouts is Figure 12: Return Loops, where drivers end up back on the street they accessed the area from. Anyway, let's head back to the UK (well London at least). 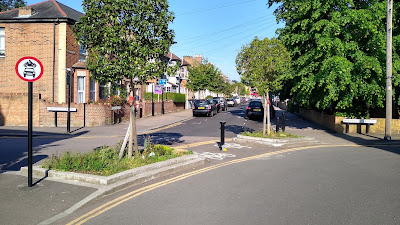 Above is the junction of Barclay Road and Mornington Road, Waltham Forest. The photograph is taken from the east side of the junction, looking west. I'm standing on Barclay Road and general traffic is one-way going away from me and turning right. On the left is Mornington Road and general traffic comes from the left and turns left into the distance. There is a lockable bollard in the centre for emergency access. A different angle of the diagonal divider is shown below. 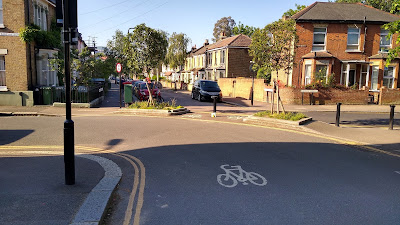 Cycle traffic is permitted in all directions which means that there is a local network which completely permeable, whereas drivers have to take a longer route, but have full access to each location. The arrangement gives an opportunity to add planting to the street. 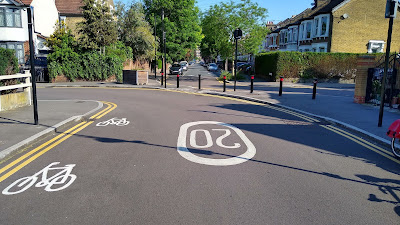 Two kilometres west is the junction of Capworth Street and Vicarage Road (above) which is has less landscaping. Again, the streets are one-way for general traffic and 2-way for cycling. Although there is less landscaping on the divider itself, the council has taken the opportunity to add some near the bend where car parking isn't permitted (below). 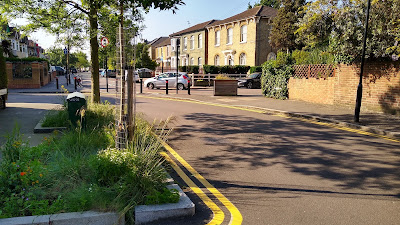 The use of diagonal dividers is often associated with developing a network of one-way streets for general traffic. This works well with dividers because in general, vehicles need more space when turning (because of the way steering geometry works) and dividers squeeze space on what becomes a pair of tight bends. Of course, if the streets are quiet, then the risk of vehicles needing to pass each other is reduced to a point where it doesn't have to be an issue and so below is the junction of Skipworth Road and Primrose Square in Hackney; 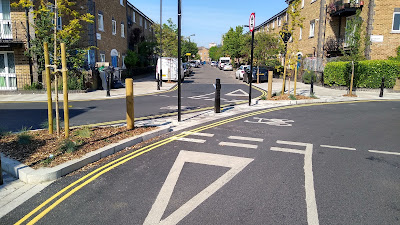 The give way markings are not because of the tight bend, but as a way of trying to prioritise cycle traffic running left - right on the photograph above (north - south through the junction) which is part of a local cycle route. I'm in two minds about the give ways because they don't guarantee that drivers will slow down and look. 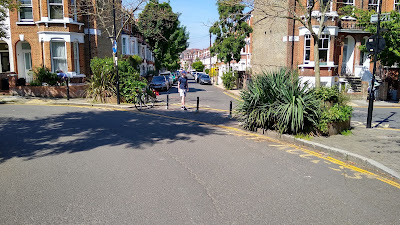 The photograph above is the junction of Ronalds Road and Avron Road, Islington. This layout has both streets being 2-way for all traffic, although there is a wider traffic control strategy at play which means that the streets are only of use for people driving with business in the area. This filter as a twin just down the road at the junction of Ronalds Road and Horsell Road (below); 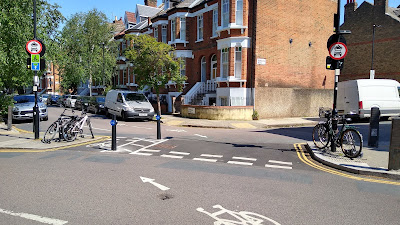 This filter has a much wider access point which allows some general traffic (coming towards us and then turning left) as part of local changes to traffic management as for the construction of Cycleway 38, although this is different to the original proposals because of other filtering works in the area. The layout does also give more emergency access to the area, but it will require camera enforcement to ensure compliance. 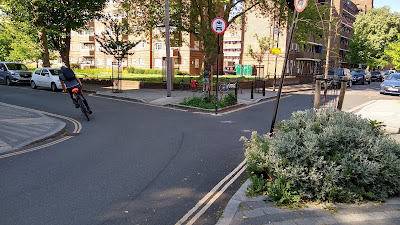 Camera enforcement is becoming more widespread in London such as a the junction of Frampton Park Road and Loddiges Road in Hackney which had a makeover with public realm and planting improvements a couple of years ago, but more recently has had lockable bollards removed in favour of camera enforcement.
Personally, I think cameras should be used in very special circumstances, but I think the bollards were being continually removed so I can understand the change. In the long term, motor traffic levels need to come down and so this should hopefully allow filters to be redesigned to be full motor traffic closures because emergency vehicles won't be held up on main roads.
For me, one of the main advantages to using diagonal dividers is that the local traffic can access the area without having to resort to three-point turns or reversing movements. This is especially important where refuse or servicing takes place because reversing vehicles adds safety risk to other highway users. They are also good driver speed-reducing devices and they can reduce conflicts at existing crossroads.
The main disadvantage is that where point filters create almost zero motorised traffic either side which is great for giving space back to the community (especially children) dividers don't generally give such space and they still have traffic passing by which is less conducive to street activity near the filter. While there will be opportunities for planting and landscaping, they just don't release public space in the same way. 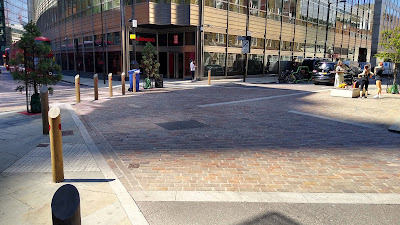 Above is the junction of Worship Street and Curtain Road which is on the Hackney/ City of London border. The public realm works give the impression of a nice public square, but in reality, the streets on both sides of the filter are busy. The City of London side runs one-way for general traffic between Appold Street and Worship Street to such a level (including buses), cycling requires protection in the contraflow direction by traffic islands on each side to stop drivers cutting the corner; 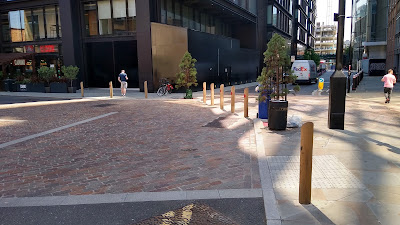 The Hackney side of the divider is two-way for general traffic, a fair bit of which is providing servicing in the local area. The bollards of the divider are timber and with air gaps up just under 1 metre, they are simply unhelpfully arranged for cycling permeability. As a concept, I would be wary about selling dividers as a way to create public space unless the junction being treated was very large and substantial space was being released.
One of the issues I saw with some of the examples was that walking hasn't been properly considered, but this is also an issue with many junctions generally. In order to make our divided crossroads fully accessible, we need four pairs of dropped kerbs to accommodate all of the desire lines.
Usually, we only tend to provide dropped kerbs across the side roads of a crossroads which is pretty motorcentric thinking anyway because we don't move past the desire lines of drivers. It is one of the issues that experimental schemes have not always addressed in terms of either not having all of the dropped kerbs needed, or the use of planters which have blocked existing dropped kerbs. 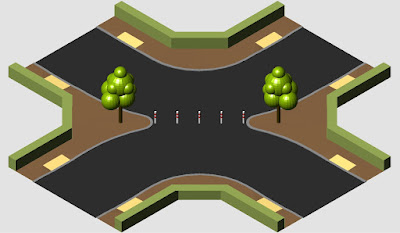 Dropped kerbs provided to accommodate all desire lines (yellow)
Diagonal dividers are a great component to have in our low traffic toolbox because they allow general access traffic to move around a neighbourhood in loops while keeping maximum cycling permeability if done correctly (and we are trying to make cycling easier than driving). But care is needed around whether to have 2-way general traffic, the carriageway width at the tight bends created, cycle safety through the features in terms of interaction with general traffic and that pedestrians are properly supported in walking through.
Posted by The Ranty Highwayman at Saturday, June 05, 2021