Last summer, I had a mooch around the Tower Hamlets - Hackney border looking at some neighbourhood schemes. Well, this week I am back for another look at the Old Bethnal Road project which has been recently completed.

I've seen this scheme on Twitter a fair bit, but as ever, I like to make my own visits to see things in the flesh as well as to get a sense of how something "feels" which is very important as a designer.
The Old Bethnal Green Road scheme is part of a much wider "Liveable Streets" project developed by the London Borough of Tower Hamlets. At it's simplest, the project is just a piece of modal filtering, but it fits within a wider jigsaw of pushing through traffic back onto main roads.
As usual, there is controversy with some people unhappy that they can no longer drive through and have to use the local A-road network. Anyone posting praise for the scheme on Twitter is immediately challenged or sometimes abused. We should acknowledge that roads like the A107 Cambridge Heath Road and the A1209 Bethnal Green Road have issues of congestion and air quality, but we should also recognise that they are better designed and managed for longer distance traffic.
We should also recognise that we need to change our streets and that endless debate never gets us started. We're always told that whichever scheme is promoted is the wrong one, it's the wrong street, there's something else going on which is more important and so on. Tower Hamlets has decided to start making strategic changes which have emerged from a great deal of local engagement and co-design.
The scheme itself runs between Mansford Street and Clarkson Street, and essentially allows Middleton Green to extend into the street at the eastern end of the scheme which is a large filter between Clarkson Street and Temple Street. 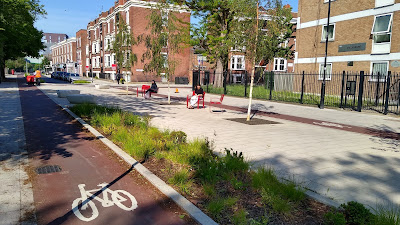 The photograph above shows the layout by Middleton Green. The carriageway has been replaced by a pair of one-way cycle tracks and a central open space with trees and seating. 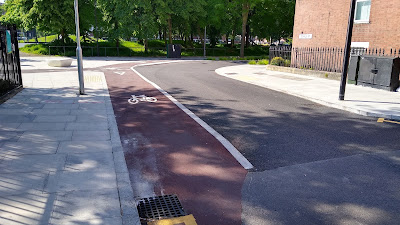 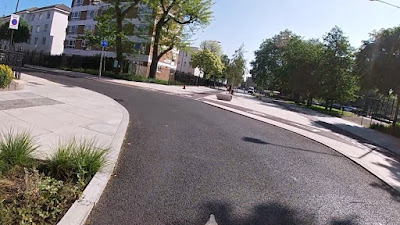 The photograph above is looking east along Old Bethnal Green Road with Temple Street to the left and the eastbound cycle track ahead. The sketch below shows the general layout with the cycle tracks hatched in. 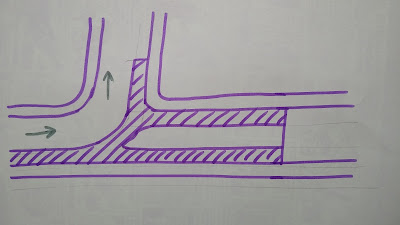 Of course, there could have been a single two-way cycle track which I have sketched below. This would have maximised the space contiguous with Middleton Green and maybe would have been an easier route to keep clear for emergency access, but as it stands, the layout does flow well for east - west cycle movements. 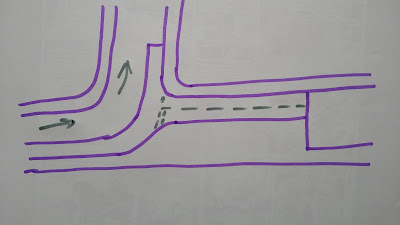 There could also have been a scheme without cycle tracks, but having something marked clearly does help with legibility. The cycle tracks are at footway level which might be an issue for some visually impaired people, although I would tend to say that this is a pedestrianised area through which people are allowed to cycle and materials have been used to guide people cycling into an appropriate place, although the give way triangles at the western end are overkill (below) 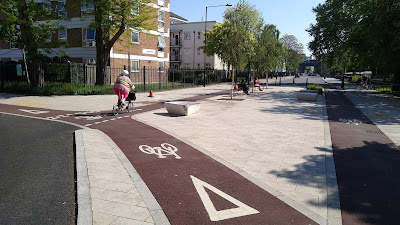 There is one problem with the layout, however. There is no way for people to cycle west and then turn north into Temple Street. My two-way cycle track option would make that a simple right turn onto the northbound general traffic route for Temple Street, but the scheme as built hasn't made any provision. I've added in green what should have been included in the current scheme (below). 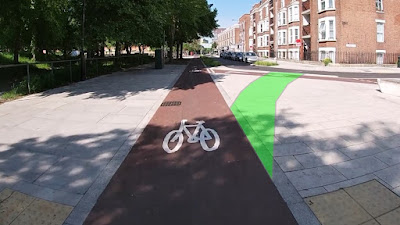 As well as the hard landscaping, new planting has been added with trees and rain gardens (below). It is a completely changed place. 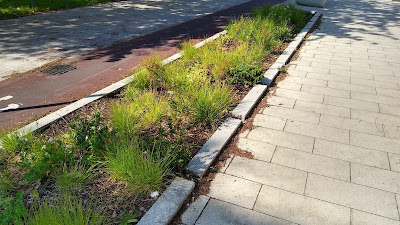 To the west of the new open space, the westbound cycle track is buffered with planting where there is space (below). 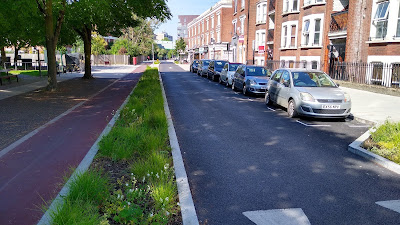 Eventually, the cycle track runs next to the oncoming general lane. At Manford Street (below), drivers emerging from the side roads can turn left or right as the general traffic running lane switches to westbound with a mandatory contraflow cycle lane for eastbound cycle traffic which is part of the local system to remove through traffic (below). The end of the westbound cycle track does drop to carriageway level with jolt and that needs sorting out. 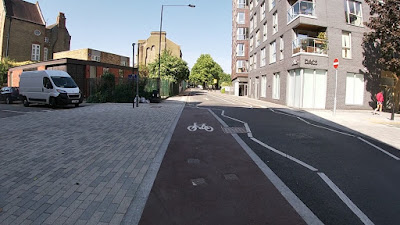 Aside from my concern about the absence of the right turn for cycles from Old Bethnal Green Road into Temple Street, the project is otherwise excellent. You don't need to take my word for it, in the 20 minutes or so I spent nosing around, there were a couple of people sat on the chairs in the public space while people cycled through every few minutes (below). 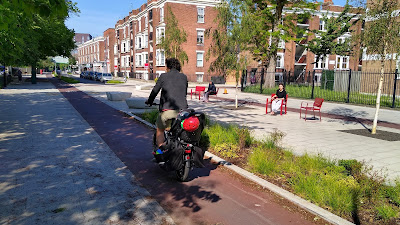 Securing the space could have been achieved with a line of bollards at each end, and at the eastern end, there is such a line to prevent anyone from driving through, other than emergency vehicles. However, I think with any scheme to remove through traffic from an area, there needs to be something "given back" through how the new space is managed.
There will be some people in the area aggrieved by the fact that they need to drive a bit further (depending on their journey) which will be seen as a loss. The provision of new open space may not be immediately something they see as a gain personally, but in time the space as an anchor for a quiet neighbourhood might reduce the feeling of loss and they might even change their minds. 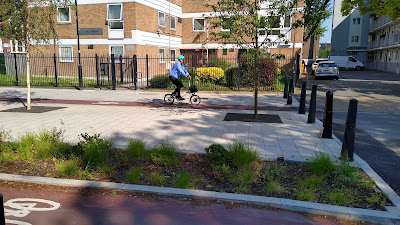 Despite the cycle tracks, this is not a cycling scheme, but people in the area now have a decent east-west option over Hackney Road and Bethnal Green Road. There's also the Oaklands Secondary school to the western end of the scheme which now a little easier to cycle to. I'll leave you this week with a short film of the scheme.
Posted by The Ranty Highwayman at Saturday, June 12, 2021