The Versatility Of Modal Filters

This week, I return to the London Borough of Hackney to have a look at a pair of very different modal filters, but ones which really show that the technique represents a spectrum of (motor) traffic management and where we can tailor things to the local context.

My trip made use of Cycleway 1 which runs from near Liverpool Street Station (Wilson Street) up to Church Road in Tottenham. This is not a post about C1, suffice to say that unlike the first proper set of main road cycleways in London, C1 mainly avoids the parallel A10 and as such remains incongruous from a directness perspective as well as being poorly signed in places.
Still, it was a handy route for my trip and for certain, it does pass through several "low traffic neighbourhoods" (LTNs) which were built before it became a catchy term. In particular, it passes through De Beauvior Town which was originally filtered in the 1970s as documented by Hackney Cyclist in 2015. 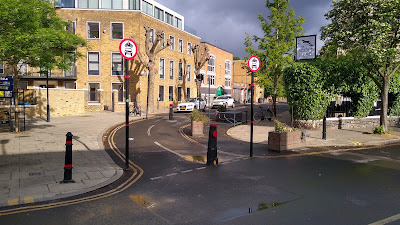 Despite running through old filtered estates, C1 still suffers from drivers cutting through and so the first filter I stopped at was part of more recent work to deal with that issue. The junction of Culford Road (on C1) with Ardleigh Road (above) was closed to motors as a trial in late 2016 (as an experimental traffic order) along with another closure just north on Culford Road itself. This was part of a wider traffic reduction plan for the area which essentially built on the original 1970s work.
As we have come to expect, there were campaigns against the proposals, but the London Borough of Hackney, working with Transport for London, decided to make the filters permanent with a permanent traffic order coming into force in March 2018. The design swapped the junction priorities of the old layout where Ardleigh Road was the main road with Culford Road as the side road. This means that Culford Road now has priority which makes for a more legible C1 route. The filter design is a "hard" filter in that there are actual bollards (above) to stop driver access (and they can be unlocked in an emergency). I prefer this approach to filters managed by enforcement camera because bollards add to the subjective safety of the location where you know you're not going to be bothered by drivers - these are the type you'll most often see people of all ages lingering.
The layout has created space for new trees and hire cycle parking (below) with a couple of planters thrown in for good measure. One thing which is missing is seating - this would be a perfect location for people to pause a while and enjoy the peace and quiet the LTN has brought. 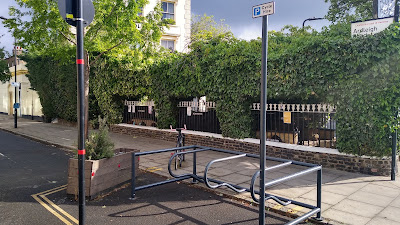 One thing I haven't worked out yet is why there is an area of carriageway which has seen planters added and the double yellow lines pushed out round them (below). There is no Google Streetview for the initial experiment and so maybe there were more bollards to start with rather than realigning the northern corner of the junction. As the area is closed to motors, there really isn't any need for the yellow paint in any case. What was good to see is that care has been taken not to block the pedestrian dropped kerbs. 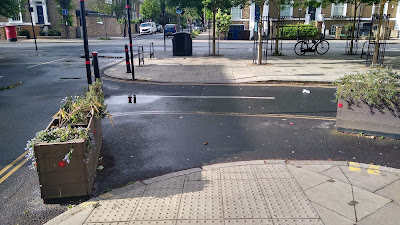 After pausing to take some photographs, I headed north on C1 once more looking for a very different filter on a very different street layout. Despite being just a couple of kilometers away, I did manage to lose the C1 signage, but I eventually arrived at Stoke Newington Church Street which has C1 doglegging through between side streets. 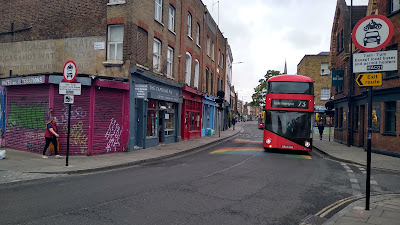 The view from the Marton Road side.
The modal filter I had come to see is essentially a 20 metre section of the street between Lordship Road and Marton Road which has been closed to most motor traffic between 7am and 7pm. Buses are exempt as are holders of the "HAC01" permit (which I'll come back to in a bit) as are emergency vehicles. Businesses can continue to take deliveries during the day and people can be dropped off, it's just they will need to go a different way. The filter stops the peak hour driver commuter use of the street, so it's safer for cycling and during the middle of the day it's quieter for those shopping or visiting.
The scheme was introduced experimentally in September 2021 and is part of the borough's general push to get longer distance motor traffic back onto the A-road network, along with making local neighbourhoods better for walking, cycling and buses. What I hadn't appreciated is that this filter was only part of a wider scheme which has created 5 low traffic neighbourhood "cells" in the greater Stoke Newington Area.
The HAC01 permit is an interesting addition. It is actually a blue badge permit exemption for certain modal filters in Hackney. In general terms, there is the ability to exempt all blue badge holders from modal filters, but Hackney has taken the decision to restrict this to permit holders. 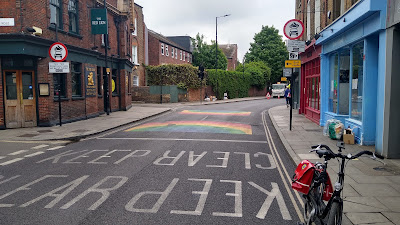 The view from the Lordship Road side.
This approach is a local policy decision and applies to filters on classified roads such as Stoke Newington Church Street which is the B104. There is a little more complication with other streets which take through traffic and so Hackney considers the same exemption to be applicable to bus routes. The point here is the borough has tried to ensure blue badge holders are not impacted by filters on the local strategic road network while maintaining the integrity of neighbourhood filters (even where camera enforced) by not applying permits there.
The use of permits also means that blue badge holders from out of the borough do not get the exemption, keeping it very local and essentially a "reasonable adjustment" for the borough's disabled residents who rely on cars for trips within the borough. This is a very subtle use of traffic powers, but it really demonstrates how schemes can be constructed to try and deal with the main issue of a local high street being used for long distance traffic, while maintaining necessary access for those most in need of it.
The Stoke Newington Church Street scheme opens up significant future possibilities because the current road design sports main road features such as pedestrian refuges, wide sections of carriageway, narrow footways and signalised pedestrian crossings. If the scheme is made permanent, there is the potential to rebalance things back towards walking which is a key high street mode, while maintaining access for buses and cycling. It's hard to sum that up in a photograph and so I shall leave you with a video which really shows the incongruity of a road managed for motor traffic where the motor traffic is removed.
Posted by The Ranty Highwayman at Saturday, May 21, 2022