Electric vehicles were on my mind again recently as I walked along the street and saw a cable running from a first floor window of some flats and across the footway to plug into an electric vehicle.

I of course tweeted out a photo and thinking my caption of "this is fine" was a little dry, I added
"This is bullying. Subsuming public amenity for private gain and there's little people walking and wheeling can do about it. If you buy a car, make your own arrangements for fueling it."
I partly post these sorts of things through general annoyance at what I consider to be basic unthinking behaviour, but because it will always get a reaction and so spark debate. 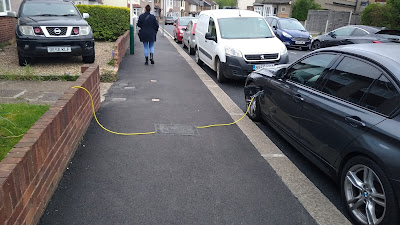 As you can see in the photograph above, the owner had some idea that their choices did create a problem for people walking along the footway, but it's was a pretty half-hearted attempt to mitigate the problem they were causing.
Let's not be under any allusions here, cables left like this are trip hazards for anyone and particularly those with low or no vision. They can also create problems for people using sticks, crutches and rollators as well as wheelchair and mobility scooters. In general highway engineering terms, anything over 6mm is very likely to constitute a trip and for people using wheeled mobility aids, smaller wheels can get caught at this level difference.
The problems with my example didn't start with the lazy draping of the cable though, this is actually the end point of policy failures which didn't foresee the shift from petrol and diesel to electric power, or if it did, a policy position which is predicated on people driving as they always did. I wrote about EVs in 2013 and 2017 where I explored these (ahem) disconnects and now in 2022, we are at the position where the government seeks to ban new internal combustion engine vehicles by 2030 as well as pressing on with roads expansion in England. Throw in car-dependent development and the demand for driving will continue to grow as well as pressure on recharging facilities. 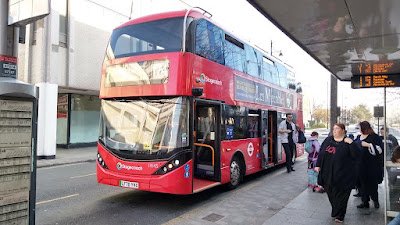 A fully electric London bus
My favourite transport planning model is "avoid, shift, improve" (ASI) which essentially looks at ways in which we can avoid travel in the first place, then shift it onto sustainable modes and then decarbonise what is left (including service, delivery and construction vehicles). It isn't just transport theory, it is interlinked with spatial planning so as many people as possible can live and work within walkable and (more often) cyclable distances, with electrified public transport talking up the slack for medium and long trips.
The policy failures in my example also extend to my local authority which has so far refused to countenance any on-street charging facilities. Those people trapped in electrifying car dependency without access to off street parking are going to find things potentially more difficult going forward. There is a wider risk that with car-dependent development, we're simply going to carry on expecting that roads between such places and city centres end up being kept mainly for moving low occupancy vehicles for commuting trips and for those who can afford cars (whether easily or by struggling) and the significant maintenance costs therein. 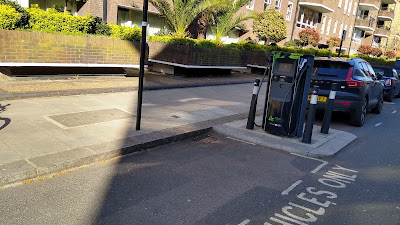 I've mixed views as I would rather we didn't clutter streets with charging kit at all, but pragmatically I guess we'll have to facilitate it, but let's take the space from the run of parking bays with a build-out and not the footway as with my example from the City of Westminster in the photograph above. I'd prefer to see much of the charging provided in repurposed petrol stations and destination parking. An "electric forecourt (below) could have a place, especially as part of a mixed use development which has retail elements. Even the fastest fast chargers take longer than filling up with petrol and so those needing them could plug in, do a small shop, and then be ready to get underway again. 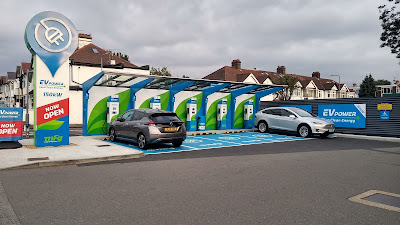 As well as local politics, the shift from private forecourts to public streets relies on local authorities which are under resourced for management of charging kit, even if the day to day operations are privately managed. It will be interesting to see how charging costs change as electricity costs rise because home charging will always be cheaper as it doesn't need the on-street kit, maintenance contracts, local authority management etc.
Some have suggested solutions to the wire over the highway problem (and thanks to those highlighting the initiatives). In Oxfordshire, a small pilot has been running to install channels in the footway to provide somewhere for cables to run. This of course assumes the user can park reasonably close to their home and in this pilot, it needed people to be on good terms with their neighbours. Interestingly, they found people only needed to charge up once or twice a week. 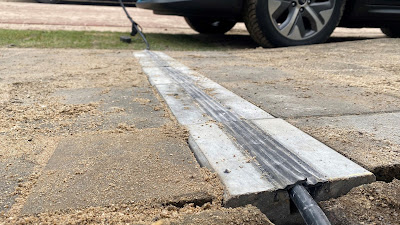 The photographs above and below are of a Dutch scheme which used a street reconstruction to add modular channel blocks within which to run a charging cable. As with the Oxfordshire scheme, this relies on neighbourly goodwill, but it deals with the tripping issue. Thanks to Sjors van Duren and RoyalHaskoningDHV Netherlands for the photograph and background. 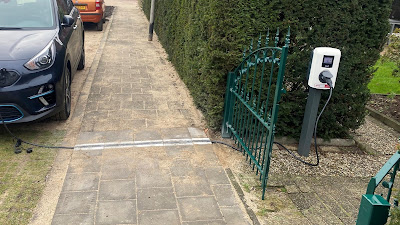 This is a pretty tidy solution, but in situations where on-street parking is dense within a controlled parking zone and where people can't often get to park in front of their dwelling, it's going to be a struggle. Potentially, permits could be developed to reserve bays for EVs near where the private chargers are located, but eventually we'll have an EV fleet and the same problems unless we reduce the number of cars people need through planning and transport policy levers.
It's also worth mentioning another Dutch solution to the problem which uses an arm swung over the footway to dangle a cable down to the vehicle. Have a look at this website for something which is way less practical than a cable channel and way more ugly in the street scene.
There's probably not a single solution to these problems and having multiple solutions is probably more resilient anyway. At the heart of this, though, remains the very real problem that policy is playing catchup and until or unless it does, we are going to get cables run over the footway. Because most people are at home at night, it will be overnight charging which makes it tougher for local authorities to deal with and what then? People have cars to charge and while it's very easy to say it's their problem to solve, some of the problem is created through policy. Expect this subject to rumble on for years to come.
Posted by The Ranty Highwayman at Saturday, May 14, 2022