In my last post, I had a look at how the Dutch use modal filtering at the macro scale to provide for cycling and this week, I zoom right in on one neighbourhood in particular where filtering is the bedrock of community-friendly streets.

Although my blog posts are a little more sporadic these days, this one is very special because it was ten years ago that my first post posed the question "What do we really want?" It's a still a question the UK grapples with, but I know what I want and it's places like the Westerstraat woonerf in Delft through which I was able to walk on my recent trip. I've read that this was the first example of the concept in the country, but I've yet to find an official source; it's at least early vintage though!
Westerstraat sits in the wider Westerkwartier neighbourhood to the southwest of the city and was built in the late 19th century as an expansion to Delft with the rest of the area springing up into the early 20th century. The streets are very narrow and over the years, they have had to face motorisation and modernisation.
One of the issues for the area was a lack of open space given the density of the buildings and the layout and so the community space for many residents was the streets themselves. The problem was that by the 1980s, private cars were dominating the space and through traffic was removing the important community function.
It's slightly tricky to pin down exactly when things changed, but it seemed that in the late 1970s/ early 1980s, through traffic was being removed from the wider neighbourhood using modal filters consisting of a mix of one-way loops for general traffic and closures to general traffic. As you might expect, this allows two-way access for cycling throughout and full permeability for walking and cycling. I'll get onto the details later, but this actually one of the first woonerven (plural) developed in the Netherlands. A woonerf (singular) translates as "living street" or "living yard". 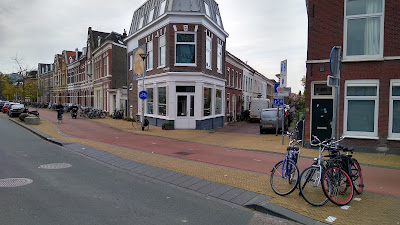 The photograph above is the northeastern end of Westerstraat where it meets Coenderstraat, a connector road which itself is actually modern because for many years it was also a narrow street fronted by the elevated railway which cut through the western side of Delft.
There are some really interesting features at this junction. The main road has one narrow traffic lane in each direction (just out of shot) with a central verge which keeps driver speeds down, but as it is providing a connector function, cycling is separated onto a two-way cycle track skirting the residential side of the street. Westerstraat here is one-way for general traffic going into the neighbourhood (but two-way for cycling) and it's the start of a controlled parking zone (more on that later). you can also see inritbanden the sloping concrete kerb units designed to help reinforce the change in street use to drivers. 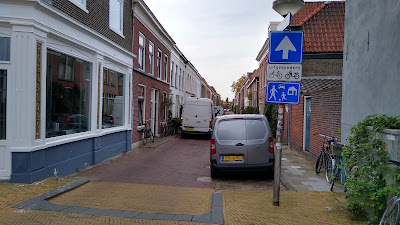 The photograph above is the view just entering Westerstraat where you can see the one-way sign (with two-way for cycles and small mopeds) plus a blue sign. 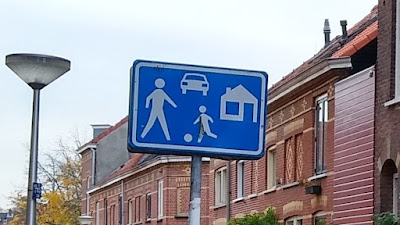 The photograph above is from a different entry point, but it marks the start of a woonerf and is covered by Dutch traffic laws and it means that pedestrians have priority over the full width of the street, drivers must proceed at walking pace. The design of the sign reinforces that this primarily a place for people and their homes. In the UK, we have "home zones", except we don't have that many as the idea didn't get off the ground.
UK Home Zones can be established under S268 of the Transport Act 2000 and include "use orders" which essentially can be used to replicate the Dutch approach. I think they never came into fashion mainly because early schemes were retrofitted and were quite expensive. Of course, a Dutch retrofit is also an expensive undertaking, but my perception is they care way more about it than the UK and residential public realm is seen as important. 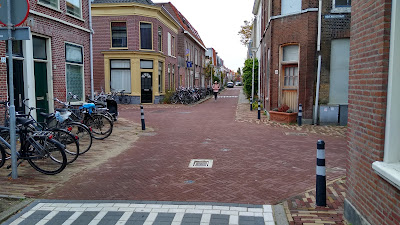 The photograph above is the junction with Hovenierstraat which had just been reconstructed when I visited because one could still see the fine sand used between the block paving to "lock" the surface in place. When you look at Streetview, the old paving didn't exactly look shabby, but one of the key differences is that car parking has been removed. 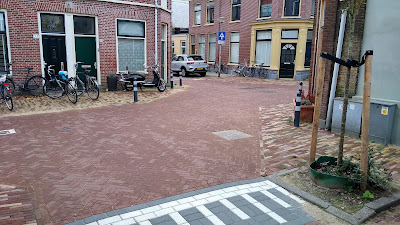 The photograph above is a different view of the junction and it shows that although the area is a woonerf covered by the entry signs, it is actually the design which encourages people to walk and cycle where they wish and it is drivers who are the guests.
This does mean that the street is being shared, but it is more like a pedestrianised shopping area with occasional access and without removing through traffic, it simply couldn't work. What you can also see is space has been given to cycle parking to try and control it's positioning in planned blocks and a chance has been taken to squeeze in a street tree. You can also just see in the grey and white blocks a ramp leading to the junction to further require slower driving. 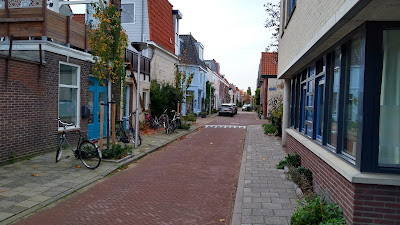 The photograph above is the junction with Tuinstraat and the layout is a little different because there are footways here. I am not quite sure why this is the case but just beyond the building on the right there is a little playground and a refuse collection facility (with underground bins) where a little bit of loitering space may be desirable. I filmed this junction so you can get an idea of how it feels to stand in the middle of it.
The photograph below is the junction with Handboogstraat to the left which itself is a no through road for driving, but fine for walking and cycling. 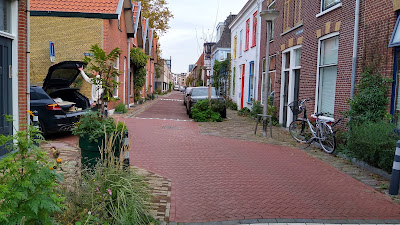 The interesting thing here is that again there has been a rebuild and car parking has been removed in favour of planting in the street and an adjustment in the horizontal geometry. The previous layout had a very narrow and virtually unusable footway to the right with a car parking bay in front. From a driver's point of view, the space ahead was a straight line. The rebuild now requires drivers to actually steer. 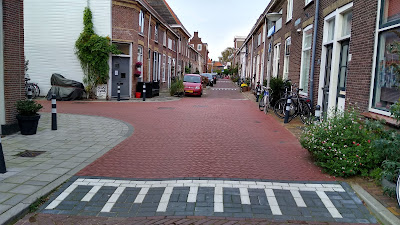 Turning north from Westerstraat, the photograph above shows Graswinckelstraat at its junction with Plateelstraat which has also been recently reconstructed. Here, the footway on the left is new and replaces what was a fairly open junction. 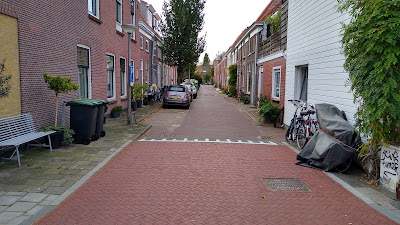 The photograph above is Plateelstraat itself and perhaps the new footway on Graswinckelstraat provides both another speed reducing feature and a bit more dedicated walking space to transition to the side street. 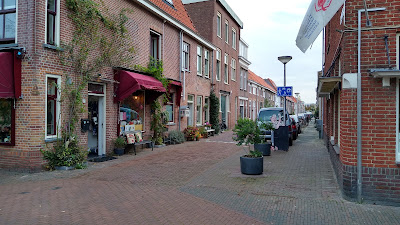 At the northwestern end of Graswinckelstraat, we meet Buitenwatersloot and it's from here, the photograph above looks back into Graswinckelstraat, but we are now outside the woonerf. The buildings either side are a fabric shop and a butchers and in fact there is a little cluster of local shops here. 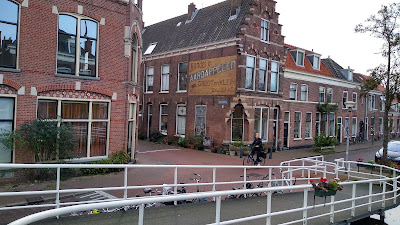 Buitenwatersloot is an interesting street in its own right. There's a canal running down the middle of the street. On the southeastern side, there is one-way motor traffic access and two-way cycling. In fact this street is part of a cycle route which eventually take you to the Hook of Holland. The photograph above is taken from a bridge over the canal looking back at the junction with Van Bleyswijckstraat which connects back to Westerstraat. The bridge is S-shaped with long ramps on each side of the canal and so is accessible to all. 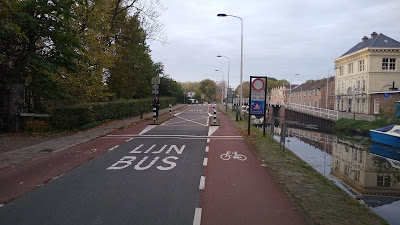 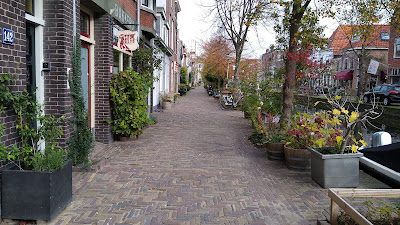 On the northwest side of the canal, the street is pedestrianised and strictly speaking, not for cycling (but people do). The shop on the left in the photograph above is a bakery which serves the local area - this place is already an 15-minute city! 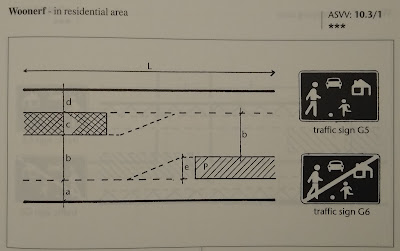 There is design guidance on the design of woonerven in "Recommendations for traffic provisions in built up areas" which is sort of like the general Dutch road and street design manual. It has been around since the 1990s and in some parts feels a bit long in the tooth, but it is an interesting reference guide and it can certainly help us unpick the design elements of a woonerf. Above is an example where car parking is used to create a chicane (but of course this could be anything other than car parking) and below is an example of where the centreline can be shifted at a crossroads. 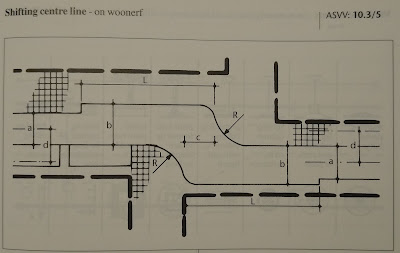 The guidance also talks about the motor traffic flow needed to be under 100 vehicles an hour which is roughly the threshold below which people start to take control of the street on foot and crucially, there's guidance on the maximum size a woonerf should be which reinforces the idea that it's a subcell of an LTN. If you want to learn more about the details, I recommend the short (free) course from Urban Mobility Academy "Designing a Livable Neighbourhood: The Woonerf Concept" which takes about half a day if you undertake the exercises.
At the start of this post, I mentioned that Coenderstraat used to be a narrow street facing an elevated railway. Until 2015 this was the case, but the Spoorzone (railway zone) project buried the railway as it went through Delft. The project released land on the surface for redevelopment including a new station which is easily accessible to Westerkwartier and helps reconnect this part of the city to the whole.
The other interesting thing is around car parking in the area. There was a backlash from residents when permit parking was proposed in 2001 and a residents' association was formed. Then as part of the railway zone scheme, lots of car parking was removed which prompted residents' groups to commission the Delft Technical University to undertake a study. This was generally a short lived problem as new underground parking was built.
I have been interested in wresting places back from the utter dominance of the car for a decade and my walk around Westerkwartier and in particular Westerstraat has well and truly cemented that interest. While the streets here are narrow, interesting, beautiful, quiet and community-facing, their operation are underlain by simple traffic management techniques. None of this is technical. It is all political.
Posted by The Ranty Highwayman at Saturday, November 26, 2022