A Walk On The Wild Side

We are lucky in London, even if we don't know we are. I am talking about the often maligned Transport for London, which when not upsetting people by doing/ not doing something, undertakes an awful lot of research and data gathering.

Personally, London is better for having TfL trying to think strategically across the city and it is heartening to see other parts of the UK trying to go the same way. Perhaps if we could dismantle the borough structure and abolish The City, we might get somewhere (at least with cycling!). OK, I am digressing and being flippant again, this is a walking post!

I was at CIHT HQ this week for a meeting of its "Walking and the Needs of Pedestrians Group" (the Walking Group for short) onto which I have been recently co-opted, where we received a presentation from the excellent Bruce McVean, who is working on updating TfL's walking strategy (which is for another day). He was giving us some background information from TfL's "Travel in London - Report 7, 2014" which looks at data for 2013/14. 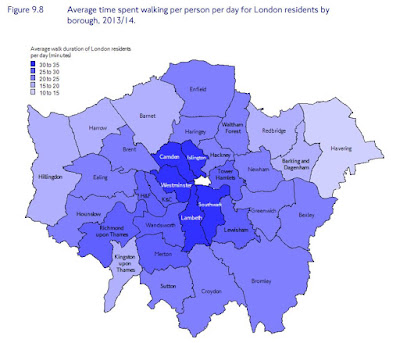 One thing which struck me from the presentation was this map for the average time London residents spend walking each day. I don't think there is a single reason, but I don't think it is surprising that people in Outer-London are walking less than in Inner-London.

The core boroughs are compact and geographically, easy to walk around. It makes me smile to see that in pro-car Westminster more time is spent walking than in the supposed pedestrian-friendly Hackney. There is also the suggestion that with Inner-London, more people use public transport which itself is associated as being used by people who are more active as well. Of course, those walking in Outer-London could commuters traveling to their local station which would distort the averages against local walking as single-mode trip.

Unlike cycling, walking generally has well-developed and mature networks, so lack of infrastructure is not a limiting factor. Of course, the quality of the infrastructure must play a big part in terms of the level of maintenance, safety (personal and threat from traffic) and opportunities to safety cross big roads. In Outer-London, there are many arterial roads and railways with limited crossing points which creates severance (as diversions are too far) and many town centres remain in thrall to motor traffic provision. There are also demographic considerations, Outer-London generally has an older population, especially in the suburbs which also have services provided in a low density way as the with the housing. 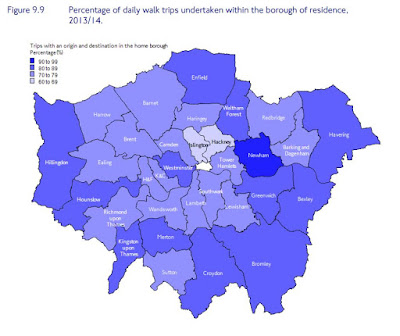 There is also a map for percentage of trips undertaken within the borough of residence. In Outer-London, it does perhaps reinforce the point that people may be commuters walking to the station! Newham does amazingly well for some reason, but Inner-London generally has less intra-borough walking trips which is suggested to be a consequence of good transport connections and smaller areas making trips outside of borough boundaries easier.

So how can we enable more people to walk further and walk more? I think we should start with our town centres and shopping parades - the areas councils fall over themselves trying to cram parking into, often cheaply and increasingly with free periods. Economically, pedestrians spend the most over time which is something which is always missed by businesses who have no idea who spends what and how they travel, but campaign for free parking. We also have councils who listen to the businesses and drivers who make the most noise and as usual, he car is seen as economic activity. Don't take my word for it, Living Streets has put the case far better than I ever could in this summary or full report.

Of course, we also have the car-centric government pushing parking as a solution to the fall of the high street. This week's mouthpiece is so called High Streets Minister, Marcus Jones, who was reported to have suggested "that small town centres could become “parking meter-free zones” in an effort to save shops from closure". I think we need to start with these places because if they fail, there will be less reason to walk locally. Is your local town centre or shopping parade well maintained, or falling apart? Is is quiet and pleasant to walk around, or is it rammed full of through traffic going somewhere else? Would you happily sit on a bench watching the world go by, or have the benches been removed?

We also need to concentrate on the areas around our schools because walking is a habit to be learnt from a young age and covers so many areas such as independent travel, health and even just being sociable. All too often children walking to school have to run the gauntlet of other children being driven so that roads are hard to cross and footways are clogged with parked vehicles.

For our short trips of around a mile (about 20 minutes), walking has got to be the mode to prioritise and our politicians need to start waking up to it. When the free parking experiments at shops come and the shops go, when children no longer walk to school because it is not safe, where will we be?
Posted by The Ranty Highwayman at Saturday, July 18, 2015