In last week's post, I reported on some of the bigger projects we saw during our first day riding around Leicester as part of the Cycling Embassy of Great Britain's AGM and Infrastructure summit. This week, I will look at some of the smaller (but no less important) things we saw, with a round up of thoughts at the end.

Our second day saw more relaxed riding with more stopping to discuss what we have seen. Starting at the Secular Hall again, in Humberstone Gate we headed west towards the city core. At this point, I will mention Humberstone Gate as it is pretty hostile to cycling being bus-central and the right hand side advisory cycle lane was not much fun to get into in order to proceed ahead into the core. 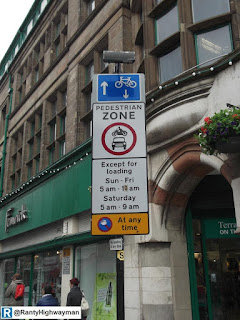 The city centre (which is apparently the largest pedestrianised area in the UK) allows cycling pretty much throughout, and it allows loading in the morning so that shops and businesses can be serviced (or by cycle any time!) In some locations, access is by rising bollards. There are also areas which allow more general motor vehicle access, but they don't go anywhere and so one cannot gain any advantage driving through the core.

The access arrangements for vehicles generally follow one-way loops, with cycles allowed in both directions. In short, one can cycle mostly anywhere and in any direction. It is lovely being able to cycle through the core and cycle parking is provided everywhere so highly convenient for activities and city visits.

One issue which has been the subject of debate is the impact large number of people cycling can have on pedestrians, especially those with visual impairment. In other words, some of the (valid in my view) arguments against sharing space* are presented as some people can feel intimidated. The routes we followed tended to be arterial to the centre rather than radial skirting the centre and there is merit in the suggestion that access to the centre is desirable as well as decent routes skirting the centre for people not stopping. The same argument for motorised traffic. 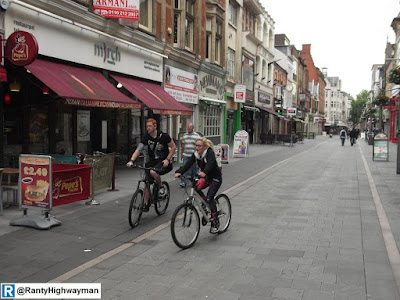 Personally, I liked the layout of Market Street which used parallel (but flush) channel blocks to mark out a "road" which was easy to cycle along. As with many towns and cities, there were too many adverting boards and many of the cafes along the street had their tables and chairs too far out. We were looking at Market Street reasonably early on a Sunday and so one can guess that it would soon fill up with pedestrians, making it less suitable as a through route for cycles.

Some of the older areas of the city had various little bypasses and contraflow cycle lanes (which in places had been curiously paved to give a bit of visual priority). For cycling (and walking), the places felt less comfortable compared to the newer stuff because there were more vehicles around (many taxis). And we saw one feature which could be tidied up, mirrored over all arms of a junction and called "simultaneous green" (sort of!). Here are some photos;

Outside of the core, we visited a neighbourhood to the southeast of the city which had been subjected to a series of road closures (to motor traffic) around 20 years ago apparently to push out kerb crawling (not our kind, the other kind). What has actually been created from the grid of streets as a layout which one can walk and cycle around in safety, while maintaining access and parking for residents. It was wonderful to move around (although a bit tatty in places) and shows how traffic can be tamed on an area-wide basis without resorting to traffic calming (which still permits the rat-running). Here are some photos;

So, there you have it. We had the opportunity to see all sorts of road and street layouts in Leicester, some good, some bad, and yes, some ugly! In one of the discussion sessions, we talked a little about the Dutch concept of "Sustainable Safety" and more specifically, we looked at single-function roads. That is;


Leicester certainly has plenty examples of access roads with modal filters in the city core and some of the residential areas to give access, but no specific cycling infrastructure. There are also distributor roads (such as the ring road) where it is recognised that protecting cycling infrastructure is required as would be the case across the North Sea.

This has certainly got me thinking on the application in the UK as we seem to try and make everything work in the one street (like Leicester's Golden Mile I mentioned last week). Often, "shared space" rears its head in situations like this, rather than unpicking and simplifying streets from a network perspective. Leicester has come a long way, but it still has a long way to go, but the city does show what can be done with political support and drive at the highest level. Oh, and it is a great place to visit and cycle around!

*I have now decided to used the term "sharing space" because "shared space" is now too associated with a type of scheme which tries to mix everyone together, regardless of mode and flows, with the assumption that it will all be fine. This couldn't be further from the truth. Sharing space implies that it has to be under certain terms (and those terms need to be defined on a case by case basis). Market Street is an example of where pedestrians are "sharing space" with cycles and (at certain times) essential vehicles. The sharing is on the pedestrian's terms (although some users may disagree with me, such is the debate raging).
Posted by The Ranty Highwayman at Friday, July 10, 2015