I have different ideas for blog posts listed - some I have even started. I've just done a tidy up and found a post I had started to write back in July 2017.

I had got as far as writing the following;
As I piloted our cargotrike around central London on the Ride London Freecycle a couple of weeks ago a chap drew next to be and asked about it.
It's a Christiania and it caught the chap's eye as he was Danish (Denmark being home of the Christiania trike) and he was surprised to see one in London. He asked if we had hired it for the day, but when I said it was ours, he further wondered if it was our second car which was very perceptive! He himself had recently got rid of his second car as his heavy lifting was done on his Bullitt, another Danish classic. 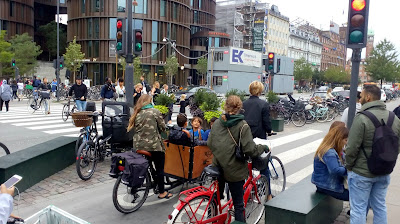 Cargocycles are a common sight in Copenhagen.

I don't recall why I stopped writing the post, but it's an interesting thing to come back to. My revisited fleeting chat with the Dane sparks a conversation in which both highway and spatial planning come together in shaping how people travel and the tools they have available. It also prompts thought about how policy (and therefore what gets built) shapes our environments, how we interact with them (and each other) and who we prioritise. Of course, it also has me thinking about how cargocycles can be instrumental in changing our urban fabric. 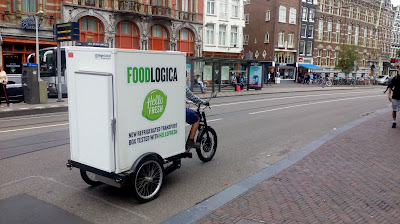 Even larger cargocycles operate at a human scale
At a basic level, the experience of using a cargocycle in a typical Outer London borough is stark in contrast with using one in Central London (or maybe Waltham Forest). Decades of spatial planning for low density housing and a stratification of employment and commercial land immediately means that people have to travel and for some things they have to travel quite a long way. 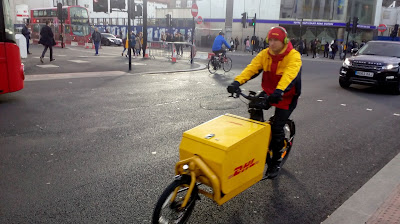 Cargocycles can replace light vans for deliveries
Outer London (as with many urban parts of the UK) has based decisions on significant numbers of households having access to private cars and from this flows the continuance of the same type of development and highway management which maintains the status quo. What is often missed is that where a household has access to a car, it is not available to all members of that household who are left to use whatever transport options remain. 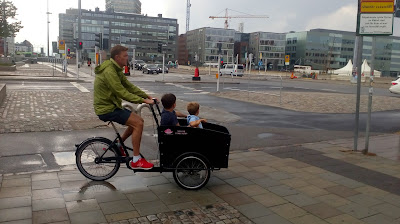 Cargocycles can fill in the transport gap between
walking and driving, especially when something or
someone needs to be transported
The thing about cargocycles is that they can fill a transport gap where a distance to be traveled is a bit far to walk (either distance or time); where something (or someone) needs to be transported; and where the distance is easily cycleabe (and that distance increases with e-assist). For example, the suburban task of doing a food shop often means having to go to a large supermarket which is a product of spatial planning policy with highway connectivity which facilitates access to such by car. 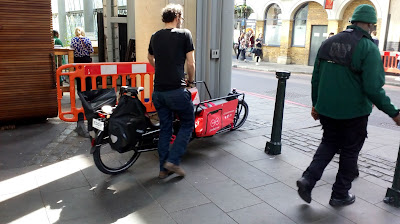 Cargocycles are the ultimate door to door shifters
of stuff because they can go where motor vehicles cannot
The large supermarket model also favours those who are able to purchase in bulk and so in terms of time efficiency, it makes sense to visit such a supermarket infrequently, but to do a large shop. Cargocycles can disrupt this model because they can deal with both the distance and the carrying issues created/ perpetuated by the model. That's not to ignore the problem with the centralisation of all sorts of services which by accident or design favour driving, but cargocycles create competition on this uneven playing field. 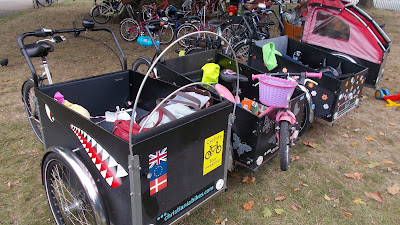 Cargocycles are great for shifting small children
and they take up way less space than cars
So what? Well, my fleeting Danish acquaintance got rid of his second car in favour of his cargocycle and he assumed I had done the same. In fact we have only ever had one car, but it is true that they cargocycle has replaced many car-based trips which are too far to walk, but easy enough to cycle and transport stuff. This is important because people dropping cars in favour of cargocycles are reducing car parking demand (at home or at destinations) and freeing up highway capacity. 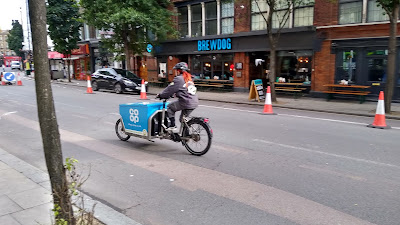 A shift in development density could make store
deliveries by cargocycles commonplace
Of course, most people are worried about the safety of cycling with traffic and cargocycles will seem quite alien to many, let alone being able to imagine how they would use one (secure parking and storage is a significant barrier for example). This means that we are back with the chicken and egg problem of needing to build a decent cycling networks to enable people to switch to cycles in the first place, but places serious about being progressive will be doing this anyway. 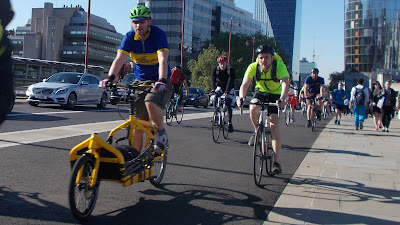 Enabling cycling makes it easy to choose a cargocycle
As time goes on, there will surely be a critical mass of cargocycle users (including commercial users) which will further erode the need to run so many private vehicles and space can be given over to cycling (and by extension walking). This has implications for spatial planning and highway policy because it nips at the heels of the model of large supermarkets, urban retail parks, drive-through restaurants and the like. 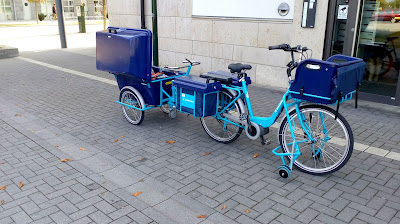 There is always a cargocycle for the job
Developers are not fools, they look at future trends, especially those who run pension funds and other investments. Sitting on a large low density commercial/ retail site starts to look like a long term risk where the transport mix starts to shift and so thoughts will turn to higher density mixed-use sites. The challenge can be that sites such as this have been serving private cars for so long, there has never been any investment in public transport and so it is clear that cycling is going to be a vital part of many people living and working on such sites in the future. In fact, could today's retail parks be tomorrow's local or district centres. 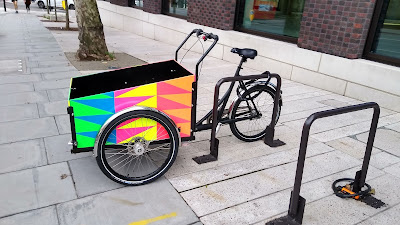 Cargocycles: for the win
Cargocycles are the pioneer species of the humanisation of suburbia. They can help terraform low density development and provide a genuine bridge between needing a car for some tasks and a reduction in suburban car ownership.
Posted by The Ranty Highwayman at Saturday, January 09, 2021