The Design Manual For Roads & Bridges Is Changing

The UK's design standards for trunk roads and motorways is changing, but there's no fanfare as the Design Manual for Roads & Bridges is rewritten.

It's not a document that I am expert in by any means, but it's essentially a design approach which (in theory) leads to consistent and legible designs which provide for safer roads. The Manual does recognise that there are people using these roads who are not driving - either in parallel or crossing and so if the requirements and advice were followed, I've no doubt that at least on the strategic road network, we'd have a similar standard to that of the Dutch where walking and cycling has to interact with large through roads.

The DMRB is a UK-wide document which covers roads managed by Highways England, the Welsh Government, Transport Scotland and the Department for Infrastructure in Northern Ireland). The Manual is set out into a number of volumes and within each one there are a number of documents setting out standards and giving advice. There are also Interim Advice Notes which cover emerging thinking in the time between the individual documents being rewritten.

The Manual used to be commended to local authorities, but that's no longer the case, but nothing stops anyone using it as a reference and for a roads scheme not being promoted by one of the four owners of the Manual, it would be perfectly reasonable to use it for the same style of road. The Manual is pretty much not applicable to local roads and streets, although there are still useful pieces of advice such as highway structures management which tends to be locally adopted.

For walking and cycling (and in fact horse-riding), some of the terminology has changed. People have become used to Non Motorised Users (NMUs), they are now termed as WCHRs (walking, cycling and horse riding) which is probably just as clumsy given that it lumps people with varying needs together. For WCHR matters, there are some key documents which are concerned with the nuts and bolts of design; 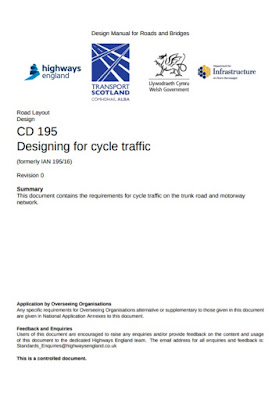 The documents I have marked with a '*' are in the old format and so I expect them to be updated or absorbed into others in the future - the whole thing is being reviewed as reported in Highways Magazine earlier this year. There are inconsistencies and contradictions, so having everything updated (and easier to update going forward) will be very helpful.

With the old format, the letters and number had a meaning. For example TD36/93 was about traffic control (T), a design document (D) and published in 1993. The '36' was just a document reference. The new system drops the publication year as the current version will be digital at the main website. The new format has five digits with the first two relating to where the document is stored in the overall structure and the three numbers are allocated by the policy group dealing with the particular document - most people won't need to worry about this of course!

Because the Manual takes time to be changed, there will be schemes which use older documents for a while, especially those which are already underway in the design phase because of a "design fix" which draws a line from where design work starts. However, as new schemes come forward, they will be using the newest documents. For those campaigning for change out there, it is a slow thing to change direction, but it's good to know what designers are working to in order to hold decision makers to account.

In the next few weeks, I'll take a look at some of the documents to give a more detailed flavour on what they are all about.
Posted by The Ranty Highwayman at Sunday, October 27, 2019