Hands up who has heard of the Dutch Reach? Well I've heard about it because I'm writing about it, but even for me it's a relatively new concept.

The Dutch Reach is apparently the way that Dutch drivers are taught to open their car doors so they don't open it into a person cycling. The thing which apparently makes it uniquely Dutch is they open the door with their hand that's furthest away from the door because the movement. Except, if the anecdotes of Twitter are to be believed, it's a sporadic movement at best. I tagged the idea with my Twitter Bullshit Klaxon which I appreciate is not subtle and not conducive to a polite discussion, but you sometimes need to tell the Emperor that you can see his nuts.

As someone pointed out on Twitter, the English don't refer to English muffins as English muffins. So why does this idea keep doing the rounds? As a person who occasionally drives and who passed their test in 1991 I have always checked what's going on around the car when getting out even as a passenger - first using the wing mirror, then checking over my shoulder and then as I open the door - a little at first.

My driving instructor taught me lots of little tricks such as filling up with petrol on the "wrong" side of the car before hoses were quite as long as they are now and when changing lanes, checking my shoulder just in case.

It turns out the resurgence of the technique is because the AA and BSM (owned by the AA) are apparently teaching it and it made some of the newspapers and trade press in the week and 62% of British drivers haven't heard of it (and it's been long picked up by some cycling campaigns). Of course, if I hadn't seen it on social media, then I wouldn't be writing this post and besides, what have I got against the Dutch Reach?

Well, if it helps you not to door a person cycling then be my guest, but it's not some amazing behavioural fix because even though it's a specific motoring offence, plenty of people are getting hurt and this is the problem with behavioural campaigns - it's going to take one hell of an effort to get the message out to the 62% of drivers who haven't heard of the Dutch Reach!

Somewhat ironically, we also learned (I had missed the March announcement) that despite the fifth anniversary of the AA's "Think Bikes" campaign that "more drivers are surprised by a cyclist or motorcyclist apparently ‘appearing from nowhere’ than they were five years ago".

Perhaps we need to actually face up to the reality of all this because drivers (and sometimes passengers) are pretty poor at seeing people cycling (and let's face it, people walking). There is lots of incompetence out there, there's lots of rule breaking and let's be honest, people are not very good regardless of their chosen transport mode.

This is why personally, I advocate for design-led solutions to road danger which anticipate that humans are fallible and that mistakes will be made (and this could be by anyone). Mistakes on our streets should not be a death sentence and frankly, we can educate and enforce until we are blue in the face, it is never going to be enough. So, dear reader, if you want to import sometime Dutch to keep people safe, then import "Sustainable safety" because it's the only thing which keeps people safe 24 hours a day and all year round. Of course for the Dutch, this all remains a constant work in progress. 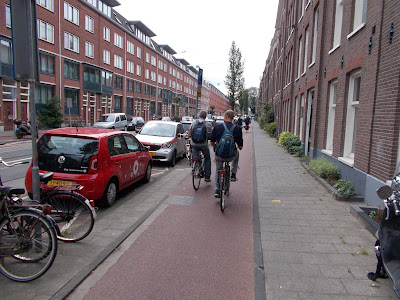 Cycle track with a buffer from car parking to
reduce the dooring risk.
Posted by The Ranty Highwayman at Saturday, November 23, 2019