For the second part of my look at Q6, I headed back to where I left off last time just outside the City of London Cemetery and headed west towards Stratford.

So, I got myself back to the junction of Aldersbrook Road and Forest Drive and carried on along Q6 to the south via Forest Drive. This section of the route has a nice smooth 2-way cycle track, but the demarcation from walking space is just paint - not even a raised tactile line. I don't know why, but the designers have put the cycling space to the rear of the highway. Convention has people walking to the rear because we are arrangement traffic by speed differential. About half way along, the speed limit drops to 20mph signifying the start of the Manor Park neighbourhood. 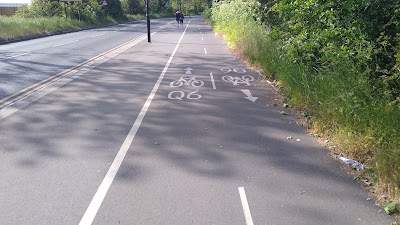 Alas, this section is just 300m long and ends in a clumsy shared area. The parallel zebra crossing helps people cycling cross the road to more shared space before rejoining the carriageway to continue south to Manor Park Station, another 250m away; 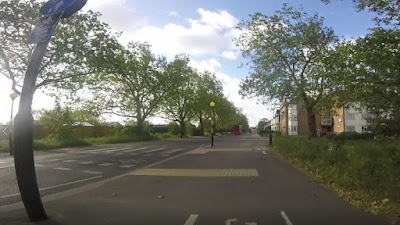 I didn't cycle to Manor Park Station, but you can see for yourself a mandatory cycle lane, interrupted by bus stops and which fizzles out before the station. Forest Drive is a bus route and it's open to all traffic so the compromise is to provide paint for cycle traffic.

Q6 carries on it's function of rarely connecting to places where people want to go and one turns right into Capel Road with another awkward layout in the mouth of the junction and with the speed limit going back up to 30mpg. 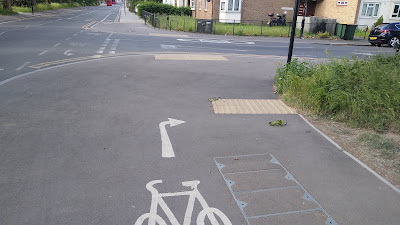 Once in Capel Road, that's it. No more signs for Q6, despite it being shown on TfL's route mapping page as I showed in the previous post. Newham's section Q6 is currently vapourware!

Using the map and my phone, I carried on - it had taken a while to get to the start of the ride, so I thought I should persevere. Capel Road is the southern boundary of Wanstead Flats and about half way along there are some football pitches. In normal times, the pitches get busy and there's often lots of traffic in the area. Q6 could actually be useful to serve the pitches, but the first part has parking on both sides which doesn't allow two-way traffic. 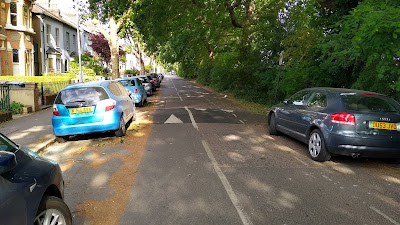 I did see some cycle parking hangers which offset the wall to wall car parking; 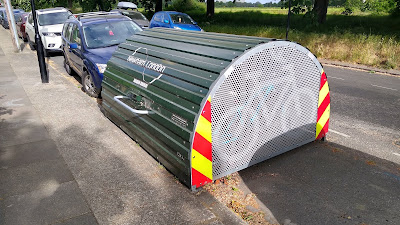 About three-quarters of the way along (heading west), the road widens quite a bit and there is evidence of some decent work going on. A kerb-protected cycle track is taking shape on the north side of the steet; 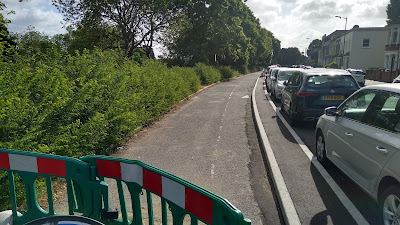 The car parking has been floated to give space for a two-way cycle track along the north side. People cycling west will have to keep an eye out for car doors being opened, but it should mainly be car passengers and they will be facing each other. There was never a footway on this side, so I can see that at busy times people cycling will have to dodge footballers walking along the track or crossing it into the fields to take a short cut.

For westbound cycle traffic, people need to join a shared space and then cross using a parallel zebra crossing which is already in place; 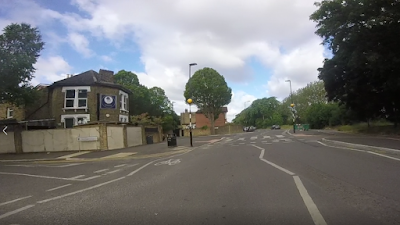 I only realised how this works after look for any plans online with thanks to Newham Cyclists for having one in their website. This does unfortunately leave a problem - why protect a section of Capel Road when the rest is unprotected? At the network level, Capel Road is in a triangle formed by the A116, A114 and A118, so why isn't the street filtered?

At the west, work is not yet finished, but the cycle track will end at another shared space for a parallel zebra crossing of Woodford Road (A114) into Brownlow Road. The crossing is already there and to get to it one pulls left onto a bit of cycle track and then across the entrance to Capel Road. After using the parallel zebra crossing, it's a case of turning right into Brownlow Road from another bit of shared space.

The route then heads off along the back streets and I had to keep stopping to check I was going the right way, for example, at the end of Bramall Close, people are invited to join another shared space, but is it ahead or right here? There hasn't been much new layout work, just resurfacing the carriageway and shared areas. 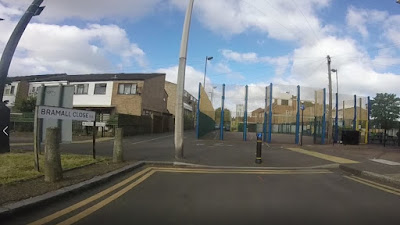 Further west and Buxton Road has fairly recently been made one-way for general traffic (below), with two-way cycling retained. The street has humps (as it did when two-way), although the designer has forgotten to warn people cycling with a lack of markings for westbound cycle traffic. The route does pass Maryland Primary School which is useful, but I really cannot see why the one-way is necessary - I can see a safety issue with drivers knowing they don't have other drivers coming towards them. The wider area needs filtering in my view. 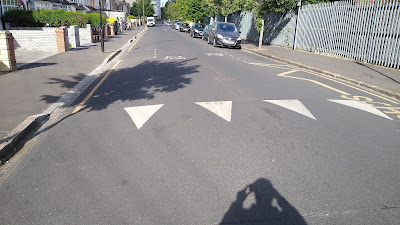 At the western end of Buxton Road, the route crosses Leytonstone Road, a busy north-south traffic route using another parallel zebra crossing. One has to move to the right hand side to join the inevitable shared area approaching the crossing, but it sort of works and puts one on a direct approach; 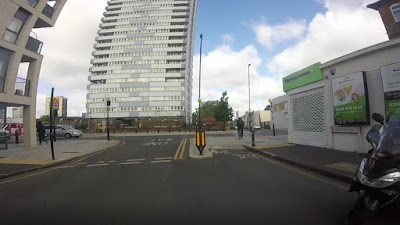 The problem is once over the crossing into Henniker Road where the design simply gives up again with people having to bounce up another dropped kerb in the junction area.

At the western end of Henniker Road I got a bit lost. I had assumed the route would meet the A112 Leyton Road, except it doesn't, it does another zig-zag via Major Road where it meets Leyton Road at a mini-roundabout. Major Road is one-way for south-bound general traffic, but people cycling north have their own give-way at the mini-roundabout; 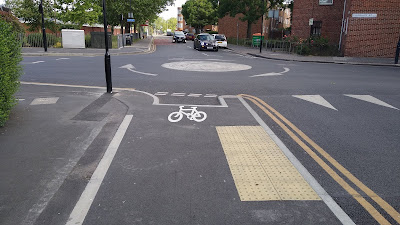 It's a very odd layout which again puts walking and cycling into conflict. Q6 turns left here (west) along another section of Leyton Road. It seems odd, but Leyton Road used to follow a couple of bends through some junctions which are now replaced with the mini-roundabout above and a kerbed roundabout round the corner.

Carrying on cycling, one gets back on the road for the mini-roundabout and then is almost immediately invited back onto the share space area to use a toucan crossing round the corner; 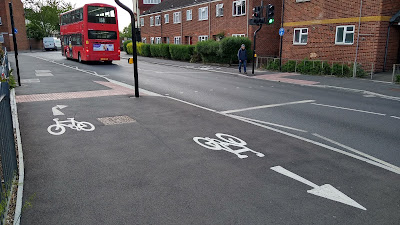 This is frankly bizarre and simply doesn't work. It's not accessible to people using larger cycles and one really won't want to jump into the road on the mini-roundabout with children. The toucan crossing doesn't even have flush dropped kerbs; 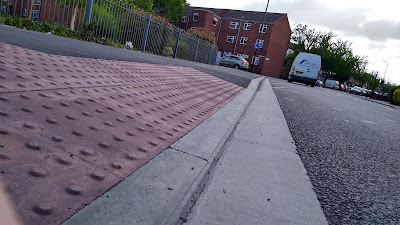 After using the crossing, one reaches the junction of the Leyton Road, the A112 Chobham Road, the A112 Leyton Road and Liberty Bridge Road (yes, it's a bit confusing - I assume the A112 was pushed through the area many years ago leaving the old streets bypassed). Q6 heads north on the non-A-road section of Leyton Road; 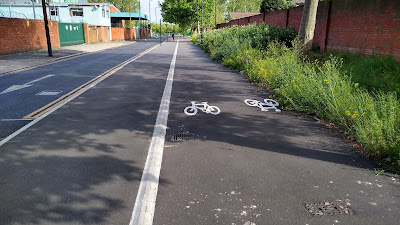 Leyton Road is one-way south-bound with cycle traffic taking to the two-way cycle track which is again oddly to the rear of the footway area, although there is at least a tactile line between the two. The cycle track isn't that smooth here and across the private accesses, it drops to carriageway level with unlawful elephant's feet markings; 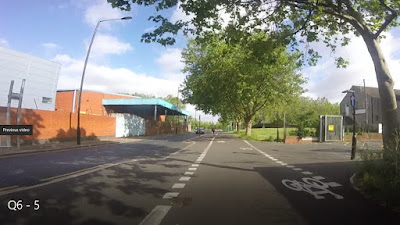 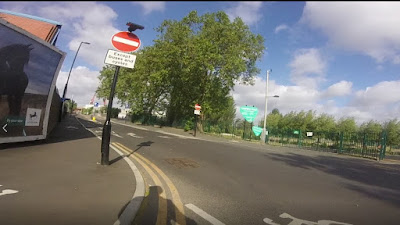 Just beyond the bus gate, there is a bridge and cycling is in a protected area, although it's a little narrow. Cycling the other way is on a separate bridge which is shared with people walking - shared space again. 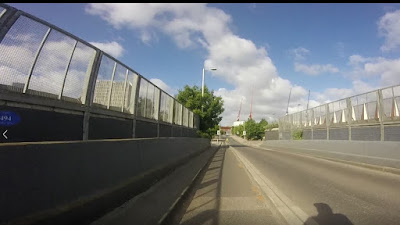 At the end of Temple Mills Lane, there is a large signalised junction with advanced stop lines and toucan crossings all round. Dual-provision strikes again. We're on the edge of the Olympics site which was built with lots of rather wide roads. Q6 will continue west into Honour Lee Avenue and so did I. Honour Lee Avenue has a two-way cycle track on its north side, but unless one had realised they they should have used the toucan crossings at the junction, there's no way of reaching it from the carriageway. 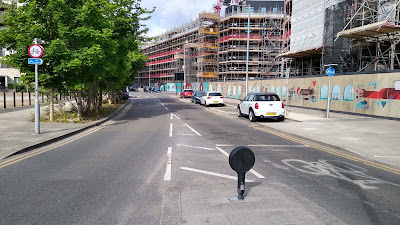 If Honour Lea Avenue seems familiar, then you'd be right, it was covered in a post just over a year ago and so I won't bother going into any detail here. It's kind of good, despite the iffy side road treatments; 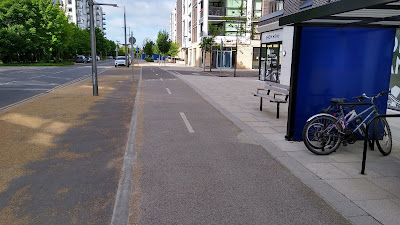 At the western end of Honour Lea Avenue, we reach the Olympic Park and the end of Q6 as it currently stands. There is a lot of work going on in the Olympic Park and I don't think Q6 is completely ready. The route will cross Waterden Road to go into Copper Street and then over the River Lea Navigatation and down to Wallis Road using a wheeling ramp or a lift not large enough for non-standard cycles which I saw last year; 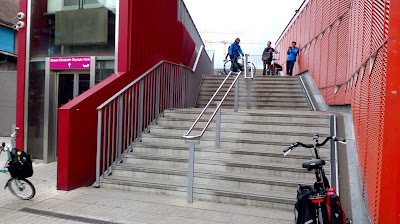 Q6 will reach the Cadogan Gate of Victoria Park and from there gives opportunities to reach other places through the park. Beyond here, I'm not sure what is happening as the route was originally meant to eventually meet CS2 at Mile End; 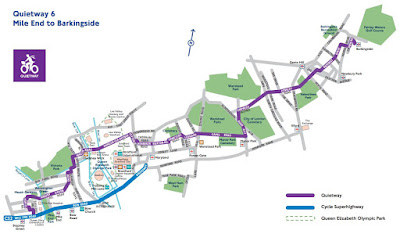 When or if that happens is uncertain and because the branding has changed, Q6 may go the way of the London Cycle Network and be a quirk of history to be reinvented and tinkered with by future designers. In the meantime, I'm left wondering what Q6 is and who is it for? It's not for people commuting to Central London from Barkingside - people who do that will be using direct roads. It provides some access to Barkingside and Manor Park stations, but it doesn't serve Barkingside or Manor Park themselves.
Anyway, you can take a look at the route yourself in my video which compresses the 40 minute ride into 13 minutes.
Posted by The Ranty Highwayman at Saturday, June 13, 2020