Although I worked some four day weeks over the summer and I combined the August bank holiday with an industry event (online), I haven't had a whole week off work since March, so it was nice to pack up the day-job laptop this week to put that right.

I had booked this week off some months back with a vague hope to get away with my family for a couple of days if things got better; but with the country still in the grip of the pandemic it just wasn't going to happen. As I'm not particularly enamoured to seek out the crowds for entertainment under normal circumstances, I had a look at the weather forecast and decided to get out on my cycle once again - a simple act which has been good for my own state of mind these past months.
I had been meaning to get over to the London Borough of Enfield to take a look at the work undertaken as part of their Mini-Holland project (rebadged as Cycle Enfield) for ages and so with a few days off and a nice day forecast, I headed out early on Monday morning for what was going to be the longest ride of 2020 at around 65km and the journey to my destination provided a bit of interest.
My route took me through lots of places I have already written about this year; the Moby Dick junction, the Redbridge LTNs (sadly now being ripped out), and the Redbridge and Green Man roundabouts - plenty of retracing my tracks. I arrived at Whipps Cross in Waltham Forest to the sun peaking above the suburbs and despite being early on a half-term day, the infrastructure was of course already in use because it forms part of a network; 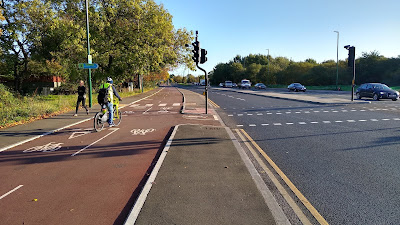 For the most part, my trip had been mainly off-carriageway, but the smooth cycle tracks of Lea Bridge Road were a welcome respite from the shared-paths and side roads of the A12. I continued west to the Markhouse Road junction where I sneaked through a right turn in a single cycle green stage (it's a bit tight on the northwest corner). There was no time for a local safari, I had some distance to travel, so I carried on north and then west again along Forest Road between the reservoirs, pausing to get a photograph of the lightly protected cycle lanes. 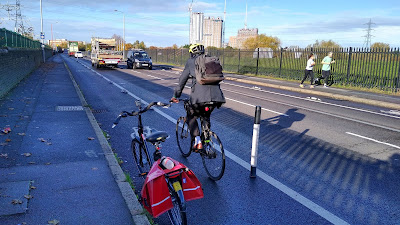 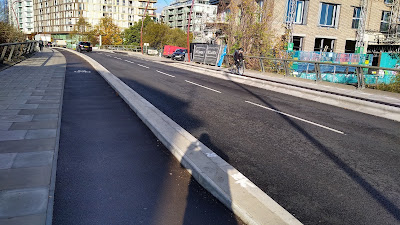 The works at Ferry Lane consist of an ashphalt cycle track with a concrete flag footway. Both are at the same level with no demarcation other than the change in materials. The large kerb in the photograph above is a containment kerb being used to protect a substandard parapet on the bridge. At the junction with Bream Close, people walking and cycling have a large junction to cross which, despite having cycle logos, looks like somewhere that drivers are invited to dominate. 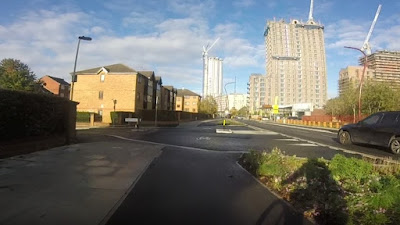 Apart from Bream Close, the layout is OK but blink and you'll miss it because you're dropped back into the carriageway into an advanced stop line at the junction with Jarrow Road/ Mill Mead Road. Sadly, this 250m of street is more of a farewell to Waltham Forest than a welcome to Haringey because between here and Enfield, there wasn't a whole lot to write home about. Here's a little video of the border country;
I found a bit of lightly protected cycle lane on CS1 at Philip Lane, but wands and mini-orcas are not intended to be used on advisory cycle lanes because drivers are allowed into them (and I find mini-orcas to be too small to be of much use); 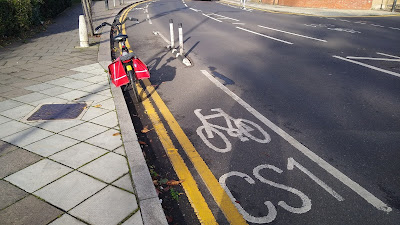 I also found a bit of lightly protected cycle lane on the A109 Bounds Green Road; 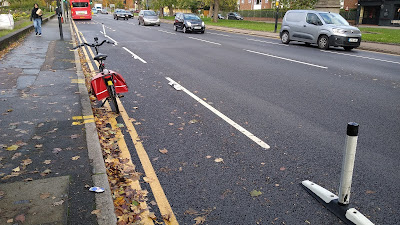 However, it was another attempt to use light protection with advisory lanes and besides, the main junctions had no protection all. This sort of layout isn't going to get people flocking to cycle here; 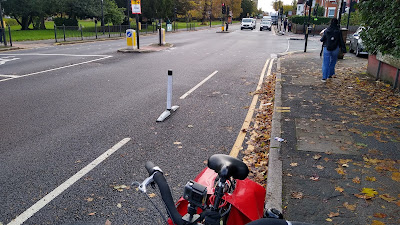 A little further west, the advisory lanes had been widened up to 2 metres which at least is the desirable minimum width set out in LTN1/20 and shows that the space for cycling exists - this could very easily be upgraded to a mandatory cycle lane with wands or bolt down kerb units. 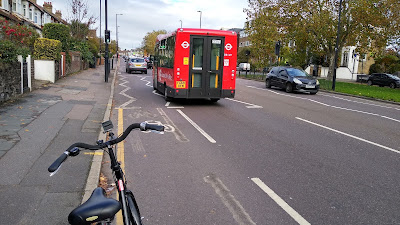 My trek across the east and north of London continued a little longer to Bounds Green Station where I turned into Brownlow Road and then stopped at Maidstone Road. Now, I was still in Haringey (although I didn't appreciate it at the time), but there was a tantalising sign of things to come; 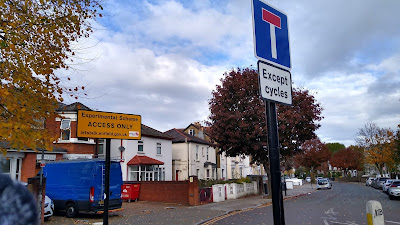 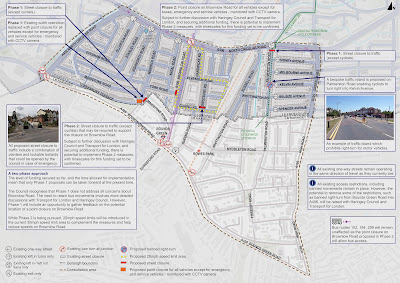 Brownlow Road is not yet part of the scheme, but Enfield is currently in discussions with Transport for London and Haringey around making changes to Brownlow Road. The project itself has come from public engagement work undertaken in 2019, but accelerated using the experimental process as a response to Covid-19.
Maidstone Road has a modal filter at its eastern junction with Warwick Road which is just inside the Enfield boundary, thus giving residents in the Haringey side a stake in the LTN; 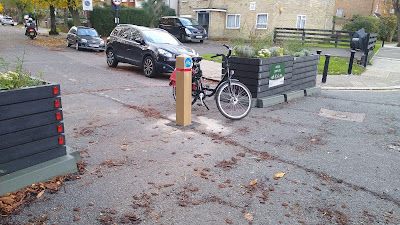 Enfield has used the common planters and bollards approach as we've seen in plenty of other places, although the planters are robustly fixed to the carriageway with additional bolt-down plastic kerb units to really try and resist the criminal damage we have seen in other LTN schemes; 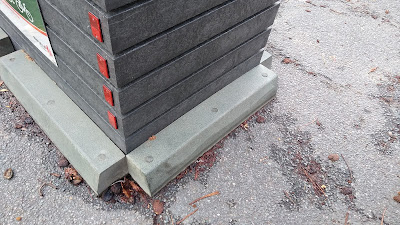 Near the borough boundary on Warwick Road itself, there's another filter which is camera-enforced to allow emergency vehicle access to the area from the A109 Bounds Green Road, repurposing an existing width restriction; 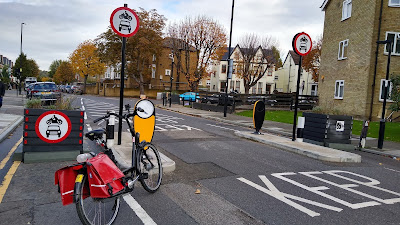 I had a quick cycle around the western side of the scheme, pausing for a look at the filter at York Road where it meets Brownlow Road - the same kind of arrangement; 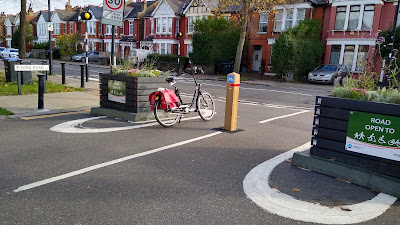 Enfield has cheekily used it's own version of the "road open" signs that have spread across the country on its planters to give a website link to the council's consultation hub and with some clear Enfield/ Streetspace branding. 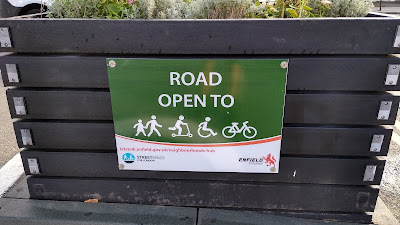 I still had lots to see and so I didn't get around the whole LTN, but there isn't much else to add - if you carefully filter a set of residential streets, they will end up being very quiet, even with a regional motorway running nearby (because that's what the A406 essentially is).
The scheme is nicely done, there has been lots of engagement, there is lots of information on the council's website (including a great set of FAQs) and the council is speaking with people to try and make it even better. Next, I headed north on Brownlow Road to have a quick look at another LTN, but that will be the starting point for next week's post.
Posted by The Ranty Highwayman at Friday, October 30, 2020