The Moby Dick junction: You'll Have A Whale Of A Time (You Won't)

Continuing the theme of looking at things from my cycle, I thought that this week, we'd have a look at one of the most awful junctions I regularly travel through: The Moby Dick.

I mean, there's a huge amount of competition out there, but this ranks as one of the most people unfriendly messes in my corner of London. It's the junction of the A12 Eastern Avenue with the A1112 Whalebone Lane North. The A12 is a long-distance trunk road (and through road) which runs between the approach to the Blackwall Tunnel in East London and Lowestoft in Suffolk (broken by a section of the A14, south of Ipswich in Suffolk). The A1112 is also a through road which runs from just south of Hainault down to Becontree Heath, cutting through a number of neighbourhoods, including Chadwell Heath.
Whalebone Lane takes its name from a pair of whale bones which were used to mark a tollgate on the Romford Road for a couple of hundred of years before being moved to Whalebone House in Chadwell Heath in the 1930s. On the north side of the junction, there is a residential tower block called Highfield House and there is a photograph in the London Borough of Barking & Dagenham's archives which shows the Moby Dick junction in 1967; 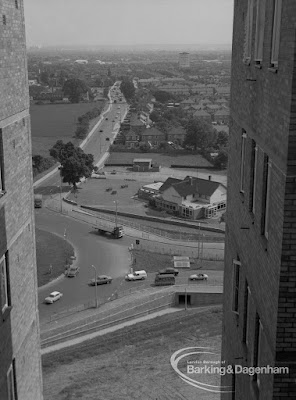 As you can see, the junction is a large roundabout with the view south across the A12 towards Chadwell Heath. The squat building next to the roundabout is the Moby Dick pub which continues the whaling theme, although it was built in the 20th Century (I can't find out exactly when, but it appears on a 1963/64 map along with the roundabout). You can just see the subway on the right (the western side of the junction) which goes under the A12. Interestingly, a map from 1951 shows the roundabout as an oval with this section of the A12 dating back to the mid-1920s as the Romford-Ilford bypass.
The junction was signalised at some point in the late 20th Century - I've had a dig around and I can't find when, but because I've known the junction as a driver since the early 1990s, it will be either the 1970s or 1980s!
The modern junction (well, 40 to 50 years old) is vast, with dedicated left turn slip roads from each arm, 3 lanes on each approach and exit of the A12 arms, separate right turn lanes from the A12 in each direction and 3 lanes on each Whalebone Lane North approach. 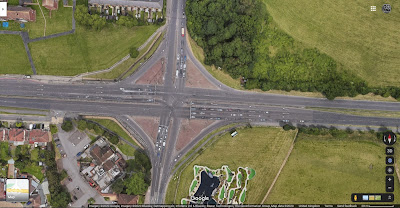 For walking, there's the subway under the western side of the A12 through which cycling is banned and we have the obligatory staggered barriers to defeat mobility scooter users. 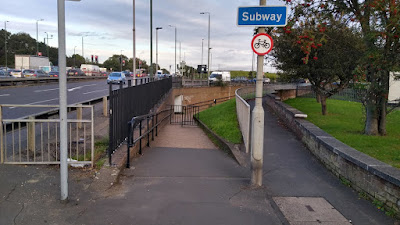 The subway itself is narrow and has a minimum headroom. With the poor visibility at the portals, the level of social safety in this 1960s relic is especially poor. 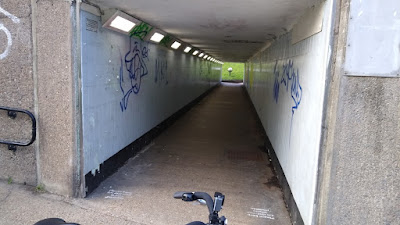 Other than that, there is no other help for people walking and cycling to cross. Not even dropped kerbs through the junction. On the north side of the A12, there isn't a footway, other than a short section feeding a bus stop.
The south side has a shared-use path on the eastern side of the junction, whereas on the western side of the junction your guess is as good as mine, but I at least will cycle on the path rather than mix with 50mph traffic regardless of the actual designation. 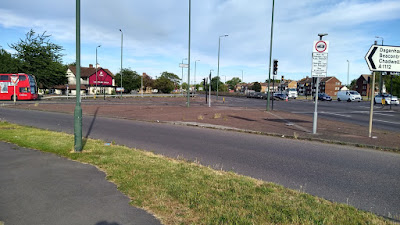 The photograph above is on the south side of the junction looking west over towards the Moby Dick pub. This is the desire line for people walking and cycling west, except there is no help to cross and you can see the crash barrier on in the distance (protecting the subway) which means you couldn't cross here anyway. The first opportunity to cross is just south of the junction, but this means dashing across traffic leaving the junction and multiple lanes joining. The photograph below is this first crossing opportunity where the crash barrier ends. 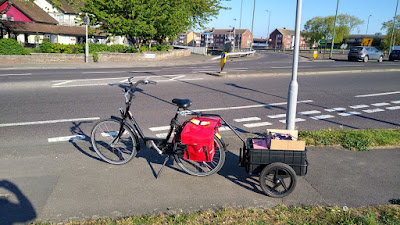 The video below shows me crossing the junction from west to east at this location where I have to find gaps in traffic and use the traffic islands for protection.
The first formal crossing of Whalebone Lane is some 285m south of where I took this photograph which is about a 7 minute walk there and back or for someone cycling, you could drop into the carriageway and cycle south, then turn right into the adjacent residential estate and then cycle north to pick up East Road and then Warren Terrace, the latter being a filtered service road running parallel to the A12 (below), although the first couple of side streets (or through the pub's car park) means a right turn across two lanes of oncoming traffic. 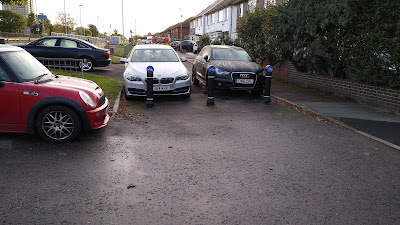 The filter on Warren Terrace to the west of the
Moby Dick junction. Often useless as it's regularly
abused by people blocking it with their cars.
If you are cycling south, there is a dropped kerb to join Whalebone Lane North from the shared-use path about 120m south of where I took the photograph above with a twin on the other side for people cycling north. Of course, if you are cycling north you can't cross at the junction to head east on the shared-use path. 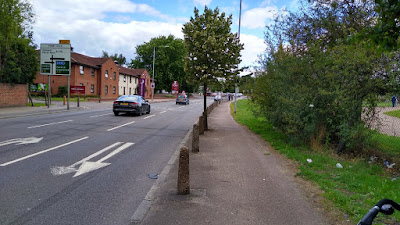 The photograph above is me standing on the southbound dropped kerb into Whalebone Lane North and the photograph below is the view across the road to the northbound dropped kerb for the transition from carriageway to shared-use path. In theory, someone on a cycle could cross the road here, but it's three lanes of traffic (two of which are northbound towards the junction). 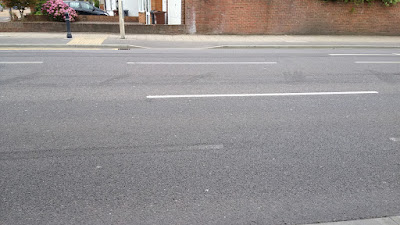 Whalebone Lane North is part of the (now largely unsupported) London Cycling Network (route 57) which connects Dagenham Dock station to the south with Hainault Country Park to the north, although I would say none of the roads on the route are safe for mass cycling, other than maybe the patchwork of cycle tracks at the northern end. In terms of road space, driving is put way above walking and cycling.
What we have here is nearly a century of failure to think about anyone other than people driving, whether that was the original oval roundabout, the round roundabout, the dingy subway, or the signalisation of the junction in more recent times. Transport for London has been in charge of the junction for 20 years of that time and yet nothing has changed. 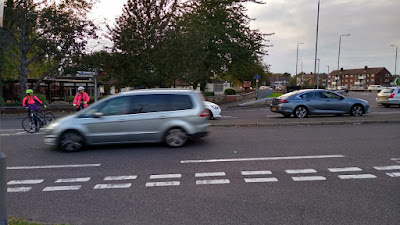 Even in the fading light of Autumn, there are people
around trying to cross the southern arm of the junction.
In terms of the technicalities of helping people to cross, the A12 arms would be challenging without some major kerb realignments to provide refuge space within the junction - as a trunk road, a single stage crossing is really not going to be taken seriously in the UK. The crossing of Whalebone Lane North is a different matter and it could be done with relative ease.

The image above shows three toucan crossings. The crossings on the slip roads are standalone and would simply operate independently and in many cases, people would just crossing in a traffic gap. The central crossing would operate when the A12 traffic was in operation (walk with traffic as it is known), but when there is no right turning traffic from the A12. The little orange area on the left is a small bridge over the subway ramp.
The way the junction is currently set up has a stage where westbound A12 traffic runs, including the right turn for drivers heading north. The next stage has the right turns stopping and the eastbound A12 running. This should be a decent gap within which to run the crossing (subject to design of course). The next stage has the westbound A12 stopping with the eastbound continuing with the right turn for southbound drivers coming in.
A Mayoral Question was asked by Umesh Desai AM in January of this year regarding the ability of people to cross Whalebone Lane North at the junction. TfL's answer maybe has a glimmer of hope, but not much;
Transport for London (TfL) is aware of the severance issues posed by this junction, and is already working with the London Borough of Barking & Dagenham to improve north-south accessibility for cyclists across the A12 between Marks Gate and Chadwell Heath. While there are no existing plans for new signalised crossings over Whalebone Lane North, I have asked TfL to look at whether crossings might be feasible as part of its Healthy Streets investment programme.
Of course with Covid hitting TfL's finances, it's doubtful whether this will ever become a priority in the short to medium term. It's not an isolated site because many of the A12 side roads are hard to cross because they lack walking/ cycling signals. But it's one of the worst and I bet there are hundreds like this all over the UK. We always seem to have money for expanding main road networks, yet things like the basic ability to cross a road simply doesn't register.
Posted by The Ranty Highwayman at Saturday, October 24, 2020