My trip to the Netherlands in 2017 seems a long way in the past and I'm itching to go on another visit. I have no idea when it will be possible and so I have to rely on my photos, Google Streetview and reading up on innovations and there's another junction type which I didn't quite manage to see.

I like the Dutch approach to road junction design as it stems from their Sustainable Safety approach. Perhaps the most exotic and lesser known junctions is the wonderfully named "voorrangsplein", which translates as "priority square". It's for use in situations where there are quieter side roads which need connecting to busier main roads where the use of traffic signals and roundabouts are avoided.
A roundabout would operate where all of the arms had broadly similar traffic flows, whereas signals might be used where flows are unbalanced or there are several traffic lanes involved. Of course, grade separation remains for the busiest situations.
The voorrangsplein usefully fills a gap. In the UK, you'll be familiar with right turn pockets for traffic. That is, right turning drivers enter a little right turn lane before completing the turn into the side road. This is sustainable safety in action. First we allow drivers to concentrate on entering the right turn pocket which takes them out of the general traffic stream, helpfully dealing with the risk of rear-end shunts. Once positioned in the right turn pocket, they can wait until there is a safe gap in oncoming traffic to actually make the turn.
It also follows that this arrangement is safer where there are single traffic lanes in each direction because there is always the risk of a driver not checking that all oncoming lanes are clear when turning. We have a lot of dual carriageway layouts in the UK where signalised junctions are used with right turn lanes, but where right turning drivers are completing turns over two oncoming lanes. It's far better to separate conflicting movements in time in these situations. It also explains why uncontrolled right turns from high speed dual-carriageway roads are gradually being removed because of the unsafe nature of the layouts.
The problem with the right turn pocket approach is that it can often be very difficult to turn right from the side road because one needs to deal with traffic from the right, then traffic in the right turning pocket and then joining through traffic from the left. We have solved one problem and created another. The voorrangsplein design breaks down all of the movements into steps so that the driver only has to cope with one thing at a time. 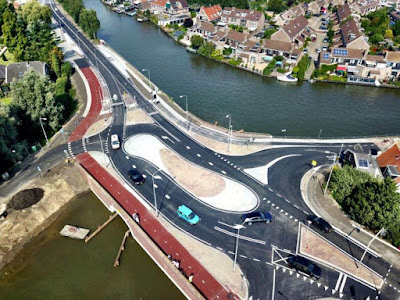 The image above from Dutch Urban Index shows a voorrangsplein to the south of Driemond, a town just to the southeast of Amsterdam. The main road is the N236, a regional road, providing a through route function for longer distance traffic and so can be quite busy. The junction has access to the town (top right) and local access either side of the canal - and it is local access, there is no route through for general traffic (below - I actually cycled through the junction when it was at the start of its rebuild). 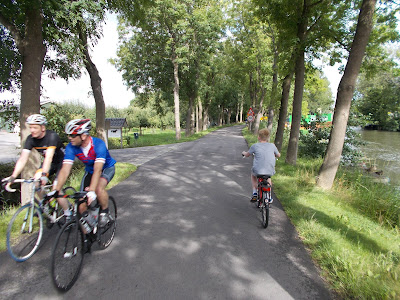 It's a little complex to understand what is happening and so let's stop and think about how such a layout could be applied in the UK. For roads like the N236, we might look upon them like we would rural single carriageway A-roads. Even if we didn't formally look at them in that way, a similar design approach is likely and so many engineers would reach for the Design Manual for Roads & Bridges, notably CD123, Geometric design of at-grade priority and signal-controlled junctions.
At the basic level, the voorrangsplein takes a single carriageway road and locally duals it (known as Single Lane Dualling - SLD). I would caution the point again that for the voorrangsplein, the side road traffic won't be significant because otherwise we'd be looking at a roundabout or signals. Here's a DMRB layout;

It's fine if you're turning right into the side road because you've space to get out of the main traffic flow before you decide to cross oncoming traffic. In essence, the movement is broken down into two parts. However, the main problem here is turning right out of the side road which is going to be tricky, because as I mentioned above, there are essentially three traffic lanes to deal with. 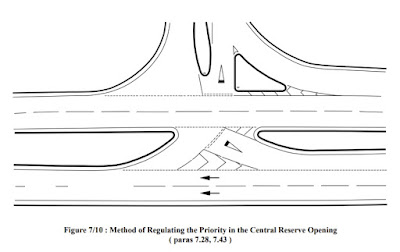 In an earlier incarnation of the DBRB there was a method of regulating priority within the central reserve of a priority junction (TD42/95 for the geeks). This was an attempt to hold drivers turning right into the side road in order to assist drivers turning right out of the side road. There are still live versions of this confusing and risky layout out there, but it's not a safe design which is why I assume it is not in CD123. 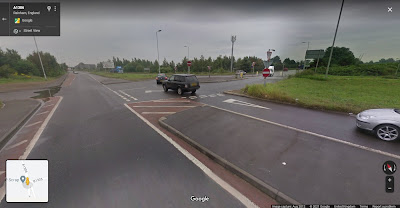 The image above is the junction of the A1306 New Road and B1335 Sandy Lane on the London/ Thurrock border. It was a very confusing layout which was designed to help drivers turn right from Sandy Lane (off to the right). The problem was that the side road movements were pretty busy and despite island-separated lanes, gives ways and red hatching, the junction had a shocking casualty rate with many deaths and serious injuries. 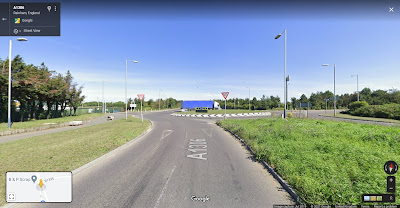 A few years ago, the junction was rebuilt as a roundabout and while there are still crashes occurring, they are far less frequent and of a lesser severity. This is down to providing a junction arrangement which is easier for people to understand and suitable for busy side road which is probably similar in terms of flows as the main road arms. This is an aside from the voorrangsplein, but merely shows that the old UK approach to managing right turns from side roads in this type of situation was a dangerous failure. A voorrangsplein would not have been suitable here because the side road is too busy.
So, what would a UK voorrangsplein look like? The image below gives a flavour and as I have drawn it with drivers on the left, it's going to be a bit easier to explain. I would state that we'd struggle to build one of these on a trunk road (as controlled by Highways England and the devolved governments) because it doesn't appear in the DMRB and innovation in layout doesn't seem to hold much interest. In theory, a local highway authority could build one though.

As you can see, we have an area of Single Lane Dualling to create space in the central reserve within which we manage right turns (Dutch left). Let's zoom in a bit. The green is verge and the light grey is an overrun area just in case we need to accommodate larger vehicles whilst keeping space tight for smaller vehicles. 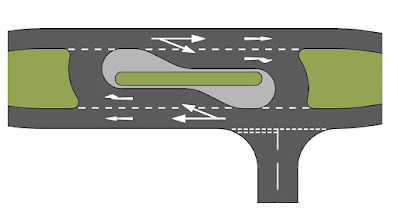 This is quite different to the UK approach. Considering the right turn from the main road into the side road, we have a right turn pocket (the length of which will vary on how busy the right turn might be). Through traffic is encouraged to slow down with narrow lanes and the deflection created by the central reserve area and so those turning right have some protection from shunt collisions. You will probably want reduce the speed limit if it's an inter-urban route and I would say a maximum of 40mph is likely to be sensible.
Once a driver is in the protection of the central reserve, they have time to consider a gap in oncoming traffic before completing the turn into the side road. So far, so UK-conventional. The key to the voorrangsplein is how right turns out of the side road are managed and protected. An emerging driver doesn't have to worry about getting across three lanes. They do need to find a gap in oncoming traffic, but once they do, they actually turn left and move into the central reserve gap in one go.
As they reach the give way point, the driver again has time to assess a gap in the oncoming traffic without having to worry about anything else - the movement has been broken down into stages. The end of the manoeuvre is the original right turn. The beauty of the arrangement is that it works with all sorts of arrangements such as a left / right stagger (if you are driving from one side road to the other, you would turn left then right);

The CD123 version of this is as below which is perhaps the closest we get to a UK voorrrangsplein;

We can also provide the more complex right / left stagger which relies on traffic signals in CD123;

This works slightly differently. The driver turning right from the main road doesn't complete the turn into the side road, they essentially perform a U-turn before turning left into the side road; but we are still breaking down the manoeuvre. For drivers turning right out of the side road, it's as before. The right / left stagger clearly needs a longer central reserve.
We can also use a voorrangsplein at a crossroads (below). Crossroads can have a poor safety record because drivers are having to find a gap in two different traffic directions. Sustainable Safety breaks down the manoeuvre and so the voorrangsplein allows cross traffic to do so in two parts, as well as providing protected right turns for those wanting to get in or out of the side roads from the main road;

It is worth zooming in for a closer look, because like the right / left stagger we only want drivers emerging from the side road to have to cross one traffic lane and not both the through lane and the right turn pocket; 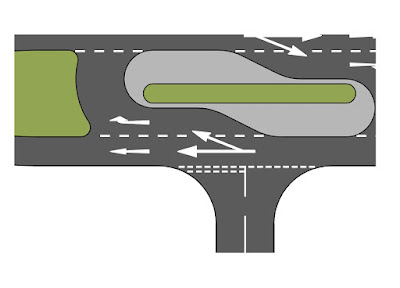 With a crossroads, I think it would be a good idea to block the visibility between the two side roads just to try and avoid the potential for a driver to see the road opposite. We want concentration to be on breaking down the movement.
The other UK issue will be signing the layout. The Dutch don't use complicated traffic signs to explain what is happening (other than destination signs). From a UK perspective, we might need a little more help and I could see people wanting to use no entry signs and turn right turns to make sure people don't turn left up the wrong carriageway, but the layout really needs to do the hard work of explaining what to do.
I can think of lots of locations where a voorrangsplein would be a good junction layout, even locations which are already roundabouts. Next week, I will continue to look at this form of junction to see how we can incorporate walking and cycling. I'll also show you a couple of more urban examples and also some links to other resources on the subject.
I'll leave you with another Dutch layout, this time on a road running between areas of Langedijk. This is a crossroads with a more suburban feel and you'll see a walking and cycling route crossing the main road at the junction (but not running along it). You'll see that the side roads are opposite the start of the right turn pocket so drivers only need to cross one traffic lane and the deflection created by the central reserve acting as a device to keep things nice and slow.
Posted by The Ranty Highwayman at Sunday, February 28, 2021