A few weeks back, a video was doing the rounds showing a driver turning right into a petrol station into the path of an oncoming ambulance on Springburn Road, Glasgow.

As you might expect, there was rounded condemnation of the driver, a 90 year old man who was reported for traffic offences. Fortunately, nobody was seriously hurt according to the news reports. And that's it. The minor outrage cycle moves on. Another day another crash. What is almost never discussed though is the factors leading up to the incident and so this week, I thought it might be interesting to explore this more.
The video I saw was posted on Twitter by @joe_yer99 and it's from this, I have taken some stills to go through the incident. The vehicles involved are that driven by the 90 year old man circled in blue and the ambulance circled in red. The first image below shows the driver in the outside lane of two on the southbound side of Springburn Road. The ambulance is coming towards him in the outside lane of the northbound side and the car driver is about to turn right into the petrol station. 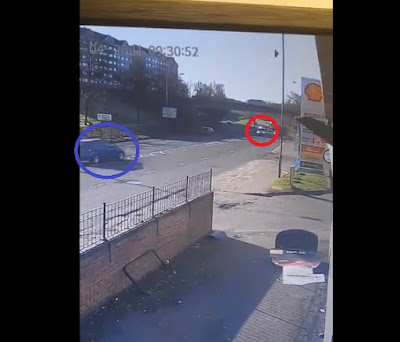 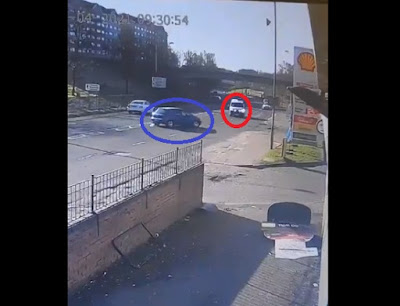 The car driver carries on with their right turn and the ambulance driver cannot quite get round him in the space left (below). 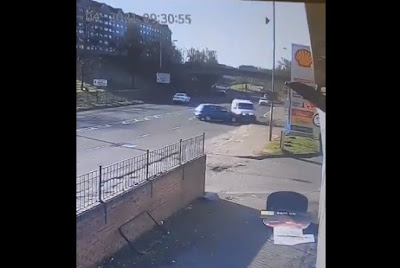 There is a collision and the ambulance is deflected into the petrol station forecourt (below). 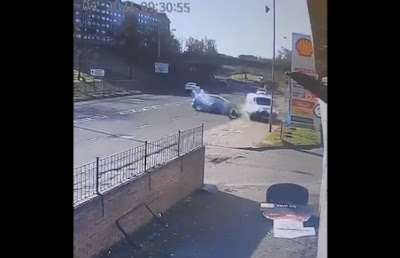 The ambulance driver has no more control and hits a lighting column which collapses on impact (below); 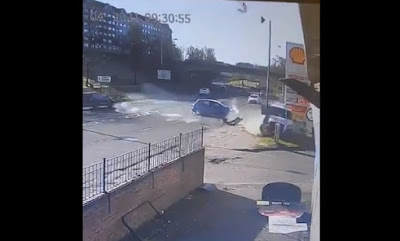 If you watch the footage, you may conclude that on balance, the car driver probably didn't see the ambulance, but the ambulance driver saw the car and it was their actions of braking and trying to avoid the collision which probably led to the outcome where nobody was badly hurt. I'd also say the lighting column also helped to take out some of the energy of the crash.
We might hear of the outcome of any charges brought against the driver of the car, although unless you are particularly following the case, it's just going to be chalked up to the statistics.
One of the things people were discussing was why the 90 year old man was driving in the first place. Well, we know nothing of the man's circumstances, but I can generalise by saying that many people have few transport options and driving may well be the only way that someone can retain their independence. We have developed a transport poor society where many people feel that owning a car is the only way they can get about and once they stop driving, they find it really hard to travel for even basic day to day essentials.
Of course, I'm interested in the road network and layout, so let's have a little look at those. The A803 Springburn Road starts at the junction with the M8 just north of Glasgow and runs north to Springburn about 2km north. To the south of the M8 the A803 immediately joins the A8 Castle Street - a city street; motorway to city centre in a very short distance; although it isn't all grade separated, it's a bit of a mixed bag. To the north of Springburn, the A803 carries on northeast for nearly 30km to the edge of Falkirk.
It's fair to say that it's a reasonably strategic route, although from the Falkirk area, there is a parallel motorway network, so maybe not as strategic as other A-roads, although from Springburn, it is the main routes into the city.
One of the key design features of Springburn Road where the incident took place is the single carriageway 2+2 lane arrangement. In other words, there are two traffic lanes in each direction with the directions separated by a centre line. This starts at the Colston Road junction and continues for nearly 1km south to around the location of the incident. 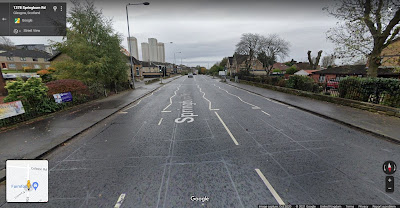 Typical layout of Springburn Road
As you can see in the image above, it's a hostile place to walk and if you can't dash across the four lanes, you'll have to find one of the two pelican crossings on this section of the road. One saving grace is the lack of central reserve means they are single stage crossings. This does make me smile as generally, designers would be itching for a crossing this wide to be a two-stage staggered affair!
Just north of the petrol station there is some widening and a right turn lane into a small retail park and by the petrol station, there is the start of some central hatching. This is because within about 70 metres south of the petrol station entrance, the 2+2 single carriageway arrangement becomes a dual carriageway with a grade separated junction. It is at this change point that the speed limit for the road goes from 30mph to 40mph. 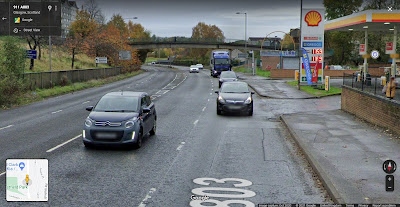 You can see in the image above the location of the incident. The car driver was turning right into an access beyond the petrol station sign. Looking from the other direction (below), you can just make out a break in the hatching which is an attempt to provide a right turn pocket of sorts. 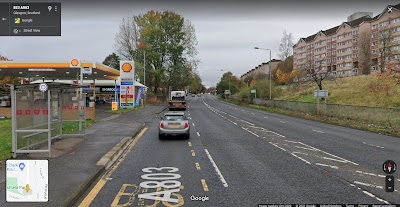 The bus stop in the image above has a twin on the other side of the road and it is accessed by the housing on the right by a footbridge (below). 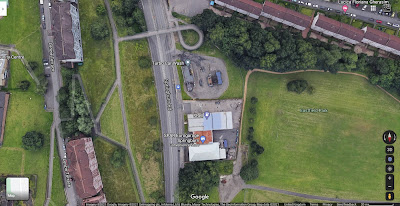 What we have in effect is the incident site being in a location within the transition from a street (wide and multi-lane as it is) and a road (the dual carriageway), something where the visual cues to drivers are quickly changing and inviting speeds to increase.
Requiring drivers to turn right on a layout like this creates two risks. First, having to move into the outside lane while slowing down in a live lane to position for a right turn risks shunts and following drivers in the outside lane swerving left (because there will always be someone speeding and not paying attention); and there there's the right turns across two lanes of traffic which risk almost head-on collisions with drivers in the oncoming outside lane and T-bone collisions from the oncoming inside lane.
Turning right out of side streets and accesses on this road means having to cross two lanes of traffic to get to the outside lane in the direction one wishes to go and three lanes to the inside lane. A sustainable safety approach would break down these movements into easy to deal with bites or perhaps prevent them from being possible. Of course, seeking to ban a right turn into a petrol station (and many other premises) would have people up in arms about loss of business and could face a legal challenge.
I also have to mention cycling. It's not a road which entices people to cycle and the turn turn issues are even more risky. Where the road turns in the dual carriageway, few people would even attempt to cycle into Glasgow city centre and so other routes would have to be followed.
For traffic flow, there is a count point about 100m north of the petrol station with recent counts as follows; 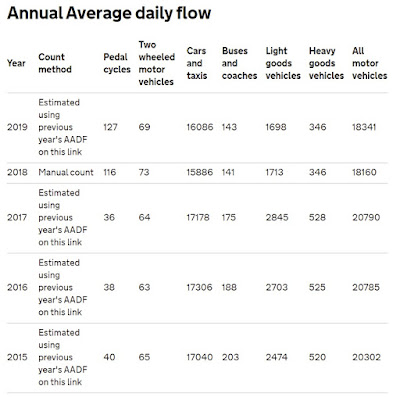 Interestingly, the flow of around 18k to 20k is towards the upper end of what one might expect on an urban single carriageway A-road with one lane in each direction. This does rather suggest that the road is significantly under-capacity in use.
In terms of injury collisions, I have had a look at the road between the dual carriageway and the Colston Road junction. Between 2005 and 2018 (the latest I could obtain), there were 42 collisions recorded with three being serious (the rest slight). Here's the breakdown; 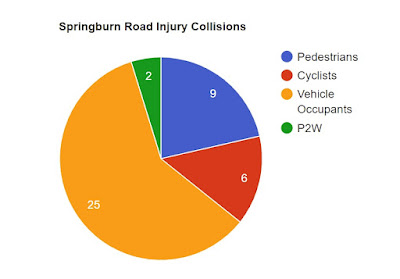 There are no pedestrian flow figures from the count data (people are simply not counted in these surveys), but as usual, those walking, cycling and riding motorcycles are over-represented in the data.
The 2+2 layout without a central reserve is a classic example of capacity being squeezed out of a road leading to risky layouts - capacity over safety. In this case, the layout isn't justified by the current traffic flows, although there would of course be a risk of queues if we took out a lane in each direction as people left the dual carriageway and arrived at the Colston Road junction.
It seems to me that there is opportunity for change. Perhaps the Colston Road junction could be a CYCLOPS junction as part of works to create better walking and cycling in the wider Springburn area. Coming south, one could see a cycle track each way and right turn points within a landscaped buffer, and towards the petrol station, maybe shared paths as we lose direct frontages which connect to a wider network (or equally keeping separate walking and cycling space depending on flows of people walking and cycling). Alternatively, there is space for bus lanes in each direction, although these are also space-hungry and don't deal with right turning issues, just reduce the risks a little.

The image above is roughly the current layout at the petrol station access. The right turn lane is little more than a break in the hatching. The image below is one possible reconfiguration;

The reconfiguration would allow drivers to turn right into the petrol station, but they would have to turn left out (which may create issues for some people). By here, cycling would be on the western side of the road because of where likely routes go towards the city. Of course, there are lots of different ways to chop up this space.
What this does show is that while there are clearly human reasons for the crash I described at the start, there has to be a serious claim that the road environment has to carry a significant amount of blame for the incident. But we never seem to get the media lifting the lid of this aspect of crashes.
Update
With thanks to Bummer for pointing me in the direction of the Glasgow Motorway Archive which gives some more historic insight of a road which was part of a 1980s road "improvement" scheme - the Springburn Expressway.
Posted by The Ranty Highwayman at Saturday, April 24, 2021