The Curious Case of the Dutch-ish Roundabout of Drayton Park

I've scolded people for calling things Dutch or Dutch-style when they really aren't. I'll preemptively scold myself for mentioning Dutch-ish in the title of this post, because it's not really about a Dutch-ish roundabout.

To be fair to the London Borough of Islington, it has stayed well away from the Dutchification rhetoric and has developed and constructed a perfectly reasonable "continental-style" junction. In other words, a roundabout with compact and tight geometry which requires drivers to slow down in order to go around it. It just so happens that they've popped parallel zebra crossings on each of the arms which hints at the Dutch urban roundabout approach (and I'll explain the differences in a bit).
The roundabout is at the junction of Drayton Park and Benwell Road, the latter of which has been filtered to keep through traffic on main roads such as the parallel A1 Holloway Road. The junction forms part of Cycleway 38 which is under construction between Finsbury Park in the north and Highbury Fields in the south. It also links to an existing cycle crossing of the A1 Hollway Road between Fieldway Crescent and Madras Place and so creates some useful cycling connections. 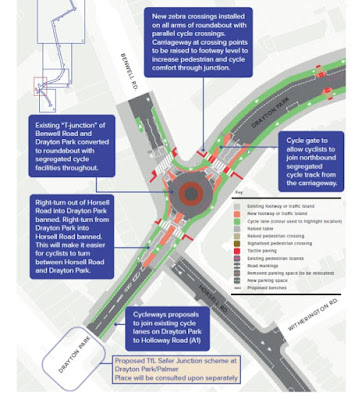 Above is a general arrangement drawing from the London Borough of Islington which shows cycle tracks around the roundabout with the parallel zebra crossings. Benwell Road is about 340 metres long with the Arsenal football stadium at its northern end. With the current filtering scheme, the roundabout provides an easy way to access the stadium by cycle from Highbury Fields. 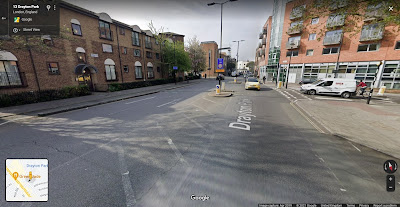 The scheme was originally agreed in October 2019 and was completed in the last few weeks. There has been some overlap with experimental filters in the wider area and so traffic levels and patterns are probably different to what they might have otherwise had been. The above image shows the  "before" layout to the north of the junction looking south with the "after" in the photograph below; 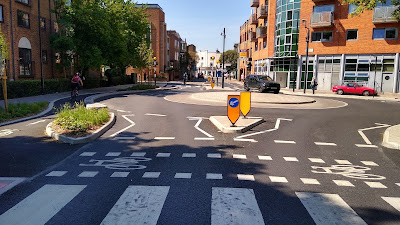 In terms of the components, let's start with the arrangement for general traffic. There are three arms and each one has one lane in and one lane out of the roundabout. The directions are separated with triangular splitter islands. The circulatory area comprises a general running lane, an overrun area constructed from block paving and a raised circular island (below). 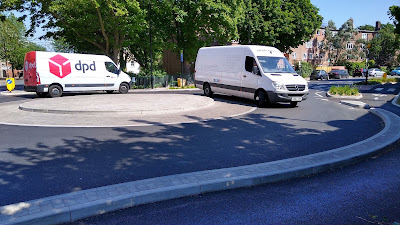 What isn't east to see is that the carriageway of the circulatory area falls out to the edge to create an adverse camber, a feature which helps to act as a driver speed-reducing device which you can just work out by the tilt of the vans in the photograph above (it also makes drainage design easy). There isn't any turn left or chevron signs on the roundabout, probably to keep clutter down and because the layout is so very obvious. I think I would like to see some large planting or other landscaping on the island to reduce the views drivers have across the junction which would also help with speed reduction.
It's a very nice example of a compact or continental roundabout, an example of which is given on Figure 10.45 of LTN 1/20; and in low traffic and low speed situations, many people would feel entirely comfortable cycling with traffic. However, notwithstanding local filtering changes, Drayton Park at least is still going to be fairly busy feeding the side streets and so the roundabout usefully protects most people. 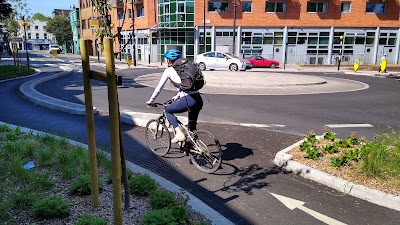 There is an orbital carriageway level cycle track around the roundabout which is separated from the carriageway by skinny traffic islands, roughly 600mm wide. For a Dutch urban roundabout, the cycle track would generally have a 5 metre buffer which you can read about here and people would be joining the crossings at 90° rather than having to turn through 90° as they cross.
Right turns for cycle traffic require the use of the parallel zebra crossings which can be both awkward in terms of having to check nearly behind you and having a very tight turning space because of the skinny island (below).
You'll see in the film linked to at the end of this post that I was taking a pretty curved path across the cycle side of the crossings to reduce the tight turn at the start and end of the crossing. This is going to be quite awkward for people using non-standard or adapted cycles. I would have liked to have seen the planting and cycle track swapped on this arm so that there was more turning space and so people cycling don't need to look behind them. 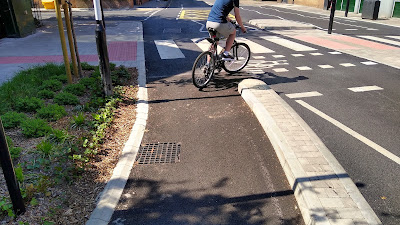 The left turns (or ahead for the southbound Drayton Park movement) are "free" and fully protected from traffic (below) which means no loss of momentum. If someone is about to cross the zebra crossing, then speed can easily be adjusted. 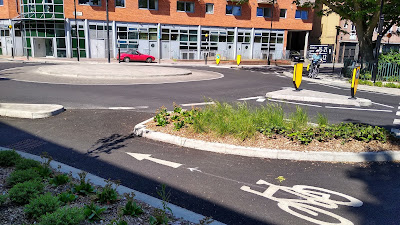 The slowing of traffic through the roundabout and the slowing of right turning cycle traffic does lower the collision risk and with the parallel zebra crossings, drivers should be expecting to stop anyway. There is space for drivers to stop before the crossing (below) and I doubt blocking back will be much of an issue because the crossing points are set back. 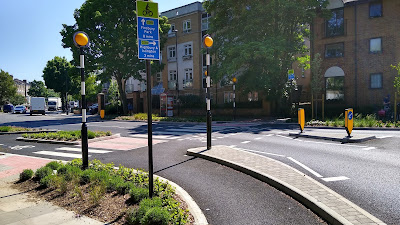 To the north of the junction, there are one-way cycle tracks currently being constructed which will extend protection to Martineau Road (and another access into Arsenal) and then northbound (uphill) protection a little further. 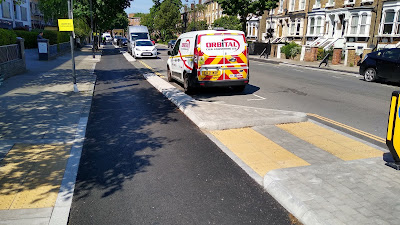 So, is the roundabout good? Largely yes, but even though lots is squeezed in, I would have preferred wider buffers with the carriageway so right turns were gentler - in some cases, the planting and the cycle track could have been swapped. The junction could have been left as a T-junction with a squarish cycle track layout and parallel crossings, but I think the use of the compact roundabout is clever because it's pretty good at getting driver speeds down and that does make a difference. I'll leave you this week with a little film of the junction with a passing note to this is my 450th blog post!
Posted by The Ranty Highwayman at Saturday, June 19, 2021