The title of this post seems like a criticism, but you couldn't be further from the truth. The fact that London's Cycleway 4 is boring is an astonishing thing and needs celebrating.

Back in 2016, I wrote the following statement;
"Luckily for us, we now have stuff we can go and point at and to be honest, me writing blog posts on it will no longer be necessary as the infrastructure becomes boring and ordinary!"
This is the 456th post of a blog, not far off from its 9th anniversary and at least on UK cycling infrastructure, I can say that in that time since I started writing we have gained many examples of well-designed and implemented schemes. Reporting on them is now almost mundane and that's a wonderful thing.
Cycleway 4 in London will eventually run from Tooley Street (just west of Tower Bridge) to Creek Road in Greenwich, providing a main cycle route for lots of people in the southeast edge of Inner London giving direct access to the centre. It also starts to connect to some of the quieter parts of the Cycleway network (former Quietways) and so is a significant part of the jigsaw for Inner and Central London. It does also highlight the stark lack of cross river possibilities in this area given how hostile Tower Bridge and (more so) the Rotherhithe Tunnel are to cycling.
The section from Tooley Street to Lower Road (by the Rotherhithe Tunnel) is my interest this week. The section was opened in the Autumn of last year and utterly transforms a really busy road traffic corridor. 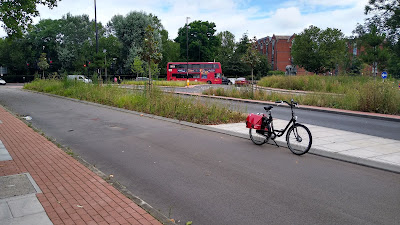 The route runs along the A200 which is not really a primary road (the parallel A2 does that job), but still a busy corridor for people driving across this part of London. Having a direct connection to the aging Rotherhithe Tunnel means that for the meantime, there's still going to be lots of demand. The photograph above is on Lower Road with the roundabout at the access to the tunnel to the right.
It's a direct route for cycling because the development which flanks the River Thames is pretty piecemeal and although the Thames Path is available, it's somewhere to pootle along rather than making useful transport cycling progress. The A200 is flanked by lots of residential development on both sides and so a route through the middle of that give a large base of people who can access it. 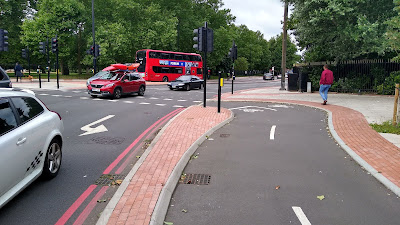 From the tunnel roundabout, there is also a handy link into Brunel Road which creates access to a large neighbourhood to the north of Rotherhithe (above). 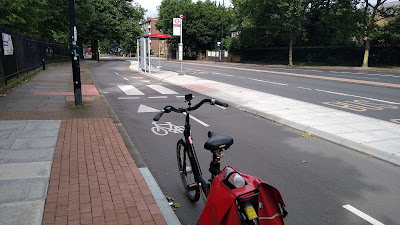 The scheme itself is largely a 2-way cycle track on one side of the road. It's generally 3.5 metres wide and as there are plenty of bus movements, the stops are all floating with zebra crossings to access them (above).
There are plenty of signalised crossings along the route, with many of them being toucans to help access streets on the opposite side of the cycle track. One of the failings of 2-way cycle tracks is that if live on opposite side of the street to the track, then accessing it is a pain (below). There's also the same staggered arrangement between crossing the cycle track and main road which unfortunately degrades accessibility. 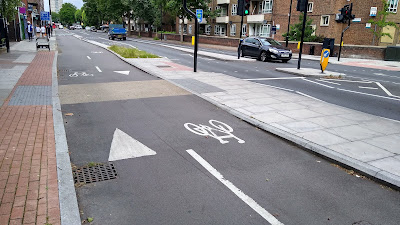 The 2-way cycle track on one side of large roads is something London and other UK cities have gone with because it makes threading them through traffic signals easier, it's more space efficient and where lots of commuting is expected, they can operate tidally. 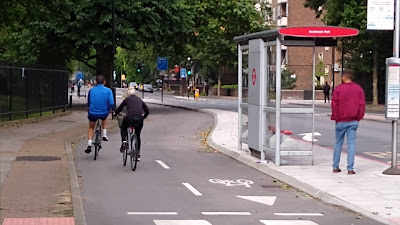 Being nice and wide does allow some side by side social cycling while giving space to overtake which is of course a positive (above) - I just wish Transport for London ran the centre line all the way along the cycle track to make it very clear that it's 2-way. 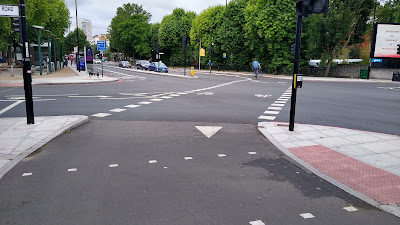 At the junction of the A200 Jamaica Road/ West Lane/ Southwark Park Road, the cycle track changes sides of the road - south to the east and north to the west. I don't know the reason why (it might be for bus movements), but from a cycling point of view, one can at least can access the side streets which is useful. The swap over also puts the cycle track on the opposite side of the road for the Bermondsey Underground Station which makes station access more difficult, especially as there's no toucan crossing to it. 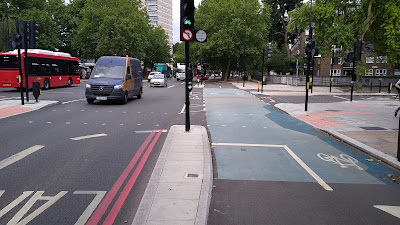 The junction with Bevington Street (above) is a good demonstration of why 2-way cycle tracks are used. There are banned traffic movements at the junction which means cycle traffic runs with main road traffic so there's no lost time giving a separate stage to cycles. There is network level though going on as drivers can still access areas both sides, it's just they will be doing so slightly differently than before. 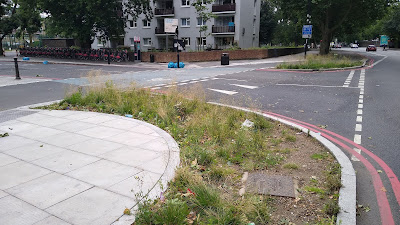 There are some side streets crossing the cycle track without signals such as George Row (above). The crossing points are bent out from the main road so that turning drivers can stop to let cycle traffic pass or wait before entering the main road. The layout of this is annoying similar to those built by TfL in the last several years because to the driver, it looks like a conventional junction where they have priority. I would like to see "entrance" kerbs and continuous treatments used in situations like this to give better priority to cycle traffic and priority to walking. 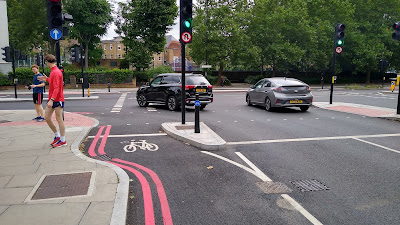 One nice junction feature at the junction with Abbey Street (above). Abbey Street isn't great for cycling, but accessing it from C4 is fully protected both cycling in and out. The pedestrian crossings on the main road are staggered which is again unfortunate, but cycle traffic gets to cross in one stage. The pedestrian crossings are floated from the north side which means cycle traffic can be accommodated within the arrangements. 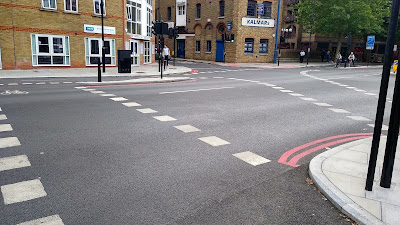 The even more useful junction arrangement is at Tanner Street. C4 continues west into Tooley Street. Eastbound general traffic has to turn onto Tanner Street (as Tooley Street has a bus gate) which is part of a much more complex arrangement for general traffic in the area. Cycle traffic, however, it protected in all directions (above) and is safety threaded along Tanner Street which becomes Cycleway 14 (previously Quietway 14) which is another very useful route as it links to C6 and C7. In other words, we are starting to unravel the cycling and motoring networks and one needs a completely different mental map for each. 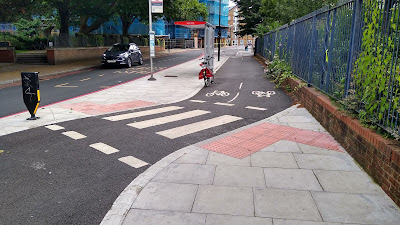 One oddity of Tanner Street is a floating bus stop where pedestrians have to cross twice as the stop is also the footway (above). Although it is well laid out, it does represent another compromise for people walking, although space has also been taken from general traffic as it used to be 2-way here.
Cycleway 4 has the same good and bad bits about it as the other high-quality Cycleways in Central London. There are kerbs with upstands which can grab wheels, pedestrians get more crossings, but some are staggered and only half the road frontagers are well served by the cycle track. But, a traffic-sewer has been transformed. People now have another real option for their journeys as this part of London has been opened up to cycling. The scheme is a well executed and quality job with a really useful connection to C14.
Cycleway 4 is an example of what we now expect to see. There is consistency with C3 and C6 and to that extent, it feels familiar to use. In fact, it is that familiarity which makes the infrastructure boring. Not having to concentrate on cycling now means the senses are elsewhere and that is the triumph. I'll leave you with a video of the route in all of its mundane and wonderful detail.
Posted by The Ranty Highwayman at Sunday, August 01, 2021